Motorists are moving pylons that are meant to create T.O.'s Quiet Streets
Skip to content 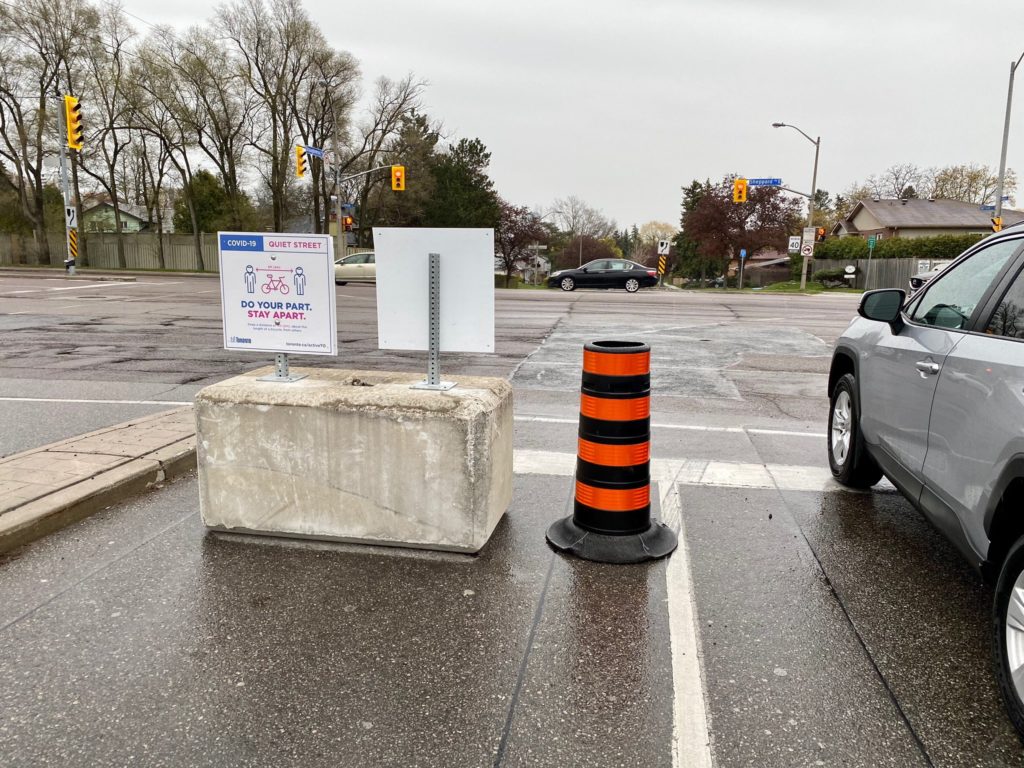 Earlier this month, Mayor John Tory announced that the city was going to start closing off portions of major roads to create 57 kilometres of Quiet Streets as part of its ActiveTO initiative during the COVID-19 pandemic. However, residents are pointing out that some motorists seem to be moving the pylons meant to restrict their access to these areas.

The pylons are used to create more space for pedestrians and cyclists to allow them to practise physical distancing while being outside in the city. Twitter user Sean Marshall, an advocate for active transportation, posted a thread showing that the motorists won in the case of Shaughnessy Boulevard in North York which has now been removed from the list of Quiet Streets.

Motorists didn’t like the traffic calming, and illegally moved the pylons and signs out of the way. Sadly, the city caved to them, despite many residents supporting the measure. https://t.co/ZcDkews2xD pic.twitter.com/EUHZIITv4p

It was reported that city councillor Shelley Carroll was inundated with calls from local residents in the Shaughnessy Boulevard area who contacted her with concerns regarding the Quiet Streets initiative, and that motorists had removed the pylons from the road.

“I support the intent of staff and the Mayor with #ActiveTO but major roadway changes need engagement and must include design feedback to get the best results inside subdivisions north of the 401,” said Carroll in a tweet.

I support the intent of staff and the Mayor with #ActiveTO but major roadway changes need engagement & must include design feedback to get the best results inside subdivisions north of the 401. #DonValleyNorth pic.twitter.com/jo5tGxdRr1

Another Twitter user, Oliver Moore, pointed out that the battle with maintaining the Quiet Streets initiative is symbolic of the battle between motorists versus pedestrians and cyclists when it comes to sharing Toronto roads.

Is there a better symbol of Toronto road relations than the city putting out shared-road pylons and someone thinking ‘nah’ and moving it onto the sidewalk? pic.twitter.com/fn4zmqU8wY

Many residents have been in favour of the Quiet Streets initiative saying that blocking off certain roads from vehicle use has allowed for kids to safely play outside in their neighbourhoods and has encouraged adults to go outside and get some exercise.

This weekend, the City of Toronto will expand its major road closures to create more space for residents to physically distance while outdoors, similar to its closures from the Victoria Day long weekend. The eastbound lanes of Lake Shore Boulevard West will be closed from Windermere Avenue to Stadium Road. The eastbound lanes of Lake Shore Boulevard East will be closed from Coxwell Avenue to south of Woodbine Avenue. Bayview Avenue from Mill Street to Rosedale Valley Boulevard and River Street from Gerrard Street East to Bayview Avenue will also be closed. The closures will be in effect from Saturday, May 23 at 6 a.m. to Sunday, May 24 at 11 p.m.