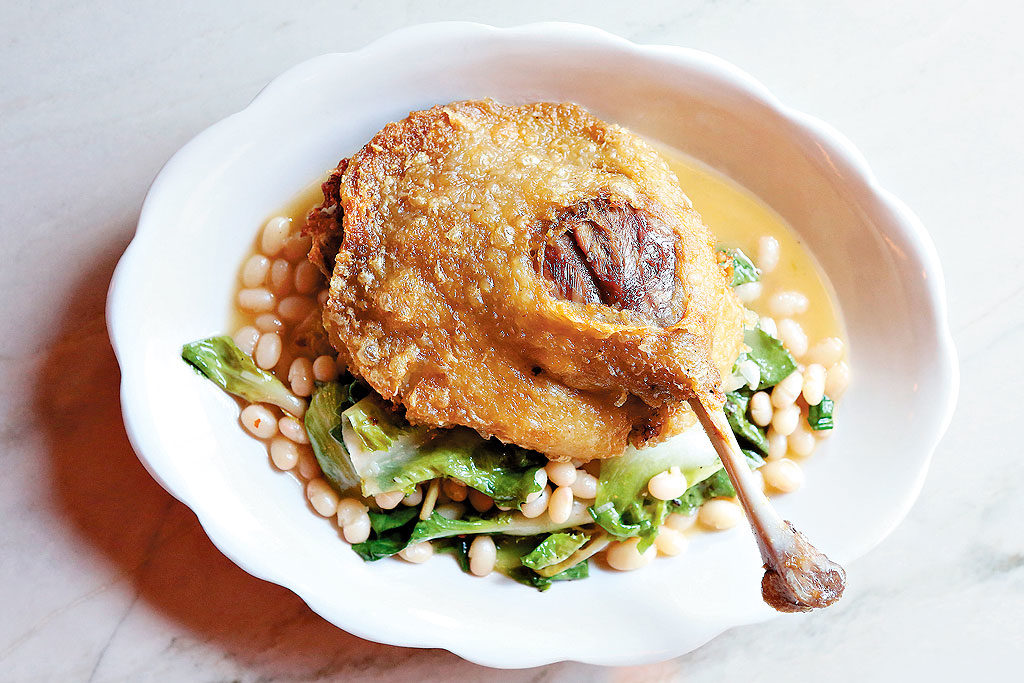 The King of Dupont, Mr. Anthony Rose, has done it again. His formula seems simple, and yet I couldn’t do it. He picks a fairly simple genre, creates the look, feel and menu, installs a chef and waitstaff who are up to that specific challenge, and lets them run with it. BBQ, deli, diner and now straightforward French bistro, in the form of Bar Begonia.

Can we be forgiven for imagining that Mr. Rose is going to the bank with a wheelbarrow on this new one, his sixth resto? First off he’s in the weird-shaped space on the north side of Dupont at Spadina that’s been empty since 2005. If I were the landlord, I’d have paid Anthony Rose to move in. And second, the place is mobbed seven days a week. No res of course.

It’s small and cramped, with marble bistro tables and a lot of action at the bar. But it’s the food that brings me back. What could be more French than tartine of pissaladière? Crusty Thuet bread topped with onions caramelized long and slow, with wrinkly black olives, chèvre cream and anchovies! Or gougères, cute warm pastry puffs spiked with Gruyère cheese. Or melt-in-the-mouth foie gras torchon with griddled sliced brioche.

Chef Trista Sheen’s salt cod croquettes are deep-fried but ungreasy with a heart of moist cod. On the other hand we would have preferred that she not deep-fry the small nuggets of sweetbread — Sweetbreads are too delicate to deep-fry and their flavour gets lost.

Her steelhead trout crudo is pretty pink trout marinated in oil and lemon with just enough boiled potato. She does a fab bouillabaisse with crisp-fried whitefish — great broth, not enough of it in the bowl. Chef’s duck confit is crisp on the outside, unctuous on the inside, perfectly partnered with chili-spiked white beans and wilted escarole.

But my heart belongs to the beef bourguignon. Anybody can make a beef stew and fancy it up with the French moniker. But this version is ultra tender, moist, infused with red wine, rich from veal stock. Adding coarse-chopped pesto on top brings the beef close to culinary divinity.

We know that, for most restaurants, the pastry chef has gone the way of the dinosaur. Except for expensive temples of gastronomy, it’s too expensive, so they have the cooks make dessert or they buy it. BB’s lemon tart suffers from that — the lemon cream is runny and the pastry hard.

Maybe it’s time for Mr. Rose to hire a baker to do all the desserts for his ever-expanding little empire. He’s good enough and it’s all good enough to merit that degree of infrastructure.

Anthony Rose is making a pretty big mark on the food of this town, and it’s a delicious one.