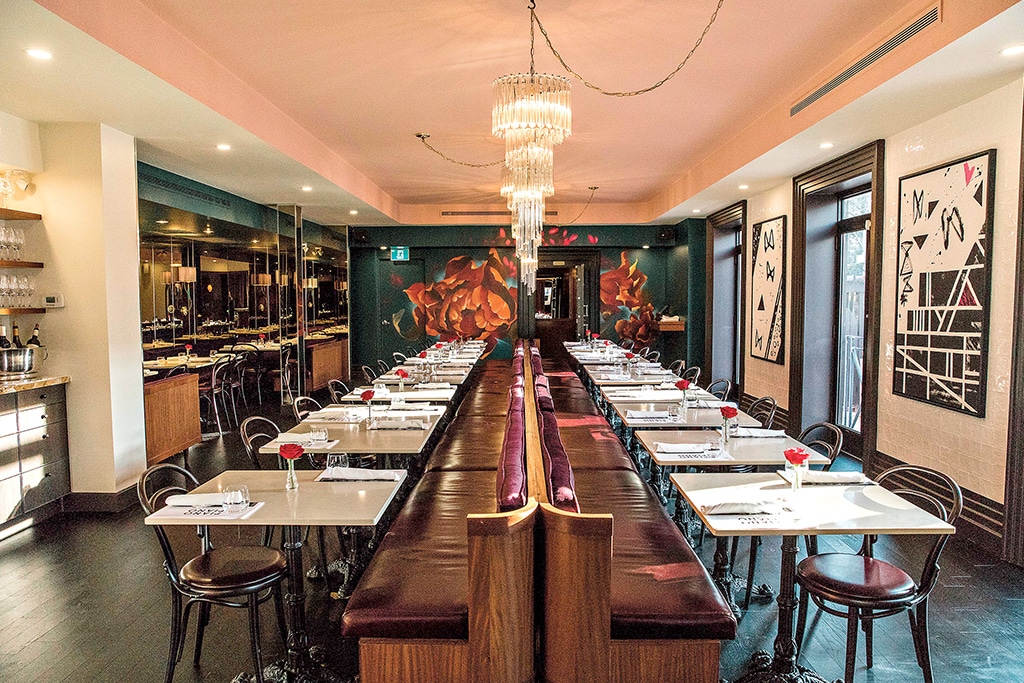 I’m just not sure about the new Piano Piano on Mount Pleasant. I don’t like it, but you might. I am so fond of the original Piano Piano on Harbord Street that it’s hard to accept such a reduction of grandeur. The original, having previously been the upscale Splendido, is every inch a grand dame visually — super-high ceiling, big bright room, those huge beveled mirrors and giant flower murals. So glam!

Cramming one bevelled mirror and one flower mural on a small wall in the new place (a former bank) painfully reminds me of when my Great Aunt Bea moved from her antique-filled house to her smallish apartment at Eglinton and Mayfair … unable to part with 90 per cent of her antiques. Not so pretty.

And how come, in this climate, they didn’t spring for an interior door, instead putting up a curtain (which few folks remember to close) just inside the doorway? My seat had the perfect flight path to receive the Arctic breeze whenever the door opened. Which actually provided some entertainment in an evening otherwise made dull by absence of both light and conversation. The latter is thanks to the noise level: Smallish room, low ceiling, hard surfaces (one fully mirrored wall) = major sound bounce. Hard to hear each other. Techno music doesn’t help. At least the menu is the same as Harbord Street.

The room is so dark that one can barely see one’s dining companion, let alone the menu. (Thank the lord for the iPhone flashlight.) At one point in our dinner the lights suddenly get brighter and then return quickly to darkness, as if perhaps two of the staff had a disagreement about the most appropriate light level, and the cool one won.

Because the place is cool. Dark and crowded and noisy is buzzy. Buzzy sells, because it confers coolness on the participants.

Butter and salt are also cool. Like potato chips. Lots of people like salt and fat. It makes us happy. But unless eating in restaurants is a person’s rare treat, it’s problematic. Most of us eat so much food that we didn’t  cook ourselves — which means it’s time to rein in the salt and fat in restaurants. I get this. I cook a lot. I learned to cook in Paris, and butterfat was my middle name. Anybody who cooks knows that fat and salt make it easy. Little artifice is required if you rely on them. Keep a tight hand on them and you need to be a much better cook. Are you listening, Piano Piano?

Clams on toast feature excellent clams on classy toast with too salty tomato sauce that screams butter. Similarly salty/fatty is mushroom salad with arugula, pancetta and big house-made croutons fried in too much oil. We’re happier with veal Parmesan on the bone, although it too lacks finesse. It has a thick roof of mozzarella, not so much Parmigiano, and the meat was a little hard to find. Don’t get me wrong, it was there, but a little thin. Maybe it’s about managing expectations. When you tell me meat is coming “on the bone,” I, a passionate carnivore, start to get excited and imagine something resembling a slab. This isn’t that.

Maybe we ordered wrong. At the Harbord Piano Piano I only eat chopped salad, pasta and pizza. I love the egg yolk raviolo with spinach, ricotta, Parmigiano and brown butter, an eggy buttery pasta thrill.

At the new place I liked the pizza, in particular, sweet Sicilian with crispy crust and fior di latte, fennel sausage, red onions and basil. It was a credit to Italy. As was the Nutella tiramisú. Inhale that confection, and you may decide that relaxing, calm and well-lit are overrated.