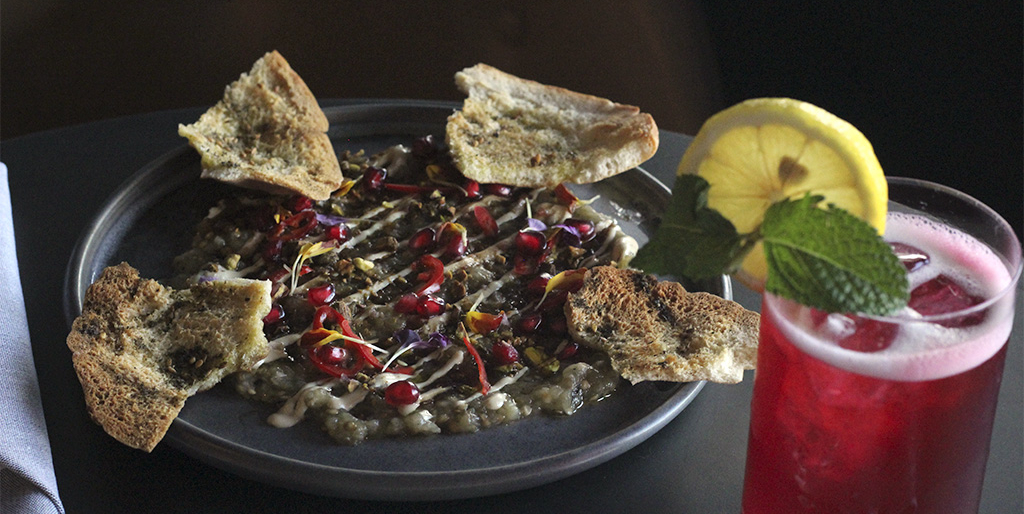 Babel's concept, led by O&B’s corporate executive chef Anthony Walsh and chef de cuisine Aviv Moshe, is a fresh take on Middle Eastern cuisine with a focus on live-fire cooking. The space, designed by DesignAgency, is earthy and bright and features a 45-foot mural inspired by ancient cave paintings by Moss & Lam Studio. The mural leads the eye from the yellow agate stone bar at the front to the open hearth at the back, which cooks black cod and smoked lemons. 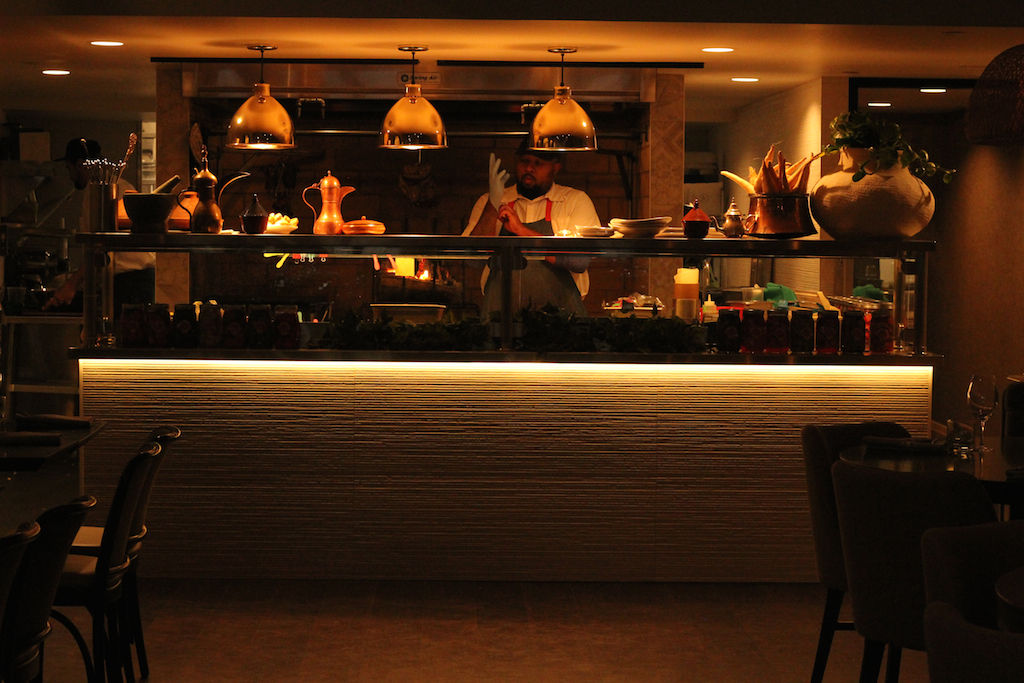 “It’s always been a restaurant that we’ve wanted to do,” says corporate executive chef of O&B, Anthony Walsh. “It’s a big part of who we are, and who our staff are. Selfishly, it's stuff that really excites us from a culinary and service perspective. There are, like, 22 countries in the Mediterranean from the south of France to Morocco to the Middle East. It’s a really fantastic palate to be drawing from, and we’re lucky that chef Aviv is with us.”

Despite the obvious Middle Eastern influence (chef Moshe was born in Montreal but raised in Israel, where he lived before moving to Toronto in 2013), Babel's menu makes subtle nods elsewhere: there’s a pappardelle dish, corned beef brisket, and a miso-glazed black cod from B.C., served with some beet tahini on a bed of couscous and red grapes ($36).

While their influences will continue to range and evolve, the heart of the restaurant and the concept is the hearth at the back. A stack of applewood and cherrywood feeds the flames, which smokes and chars everything from a dripping branzino to eggplant for their charred eggplant dip. In these early stages, many of their dishes are still roasted in the oven, but the aim is to be able to cook up to 80 per cent of the menu over the open hearth.

“We’re coming back to the roots,” says chef Moshe. “You cannot cook without fire. We have the smoke, and we can control the heat.” 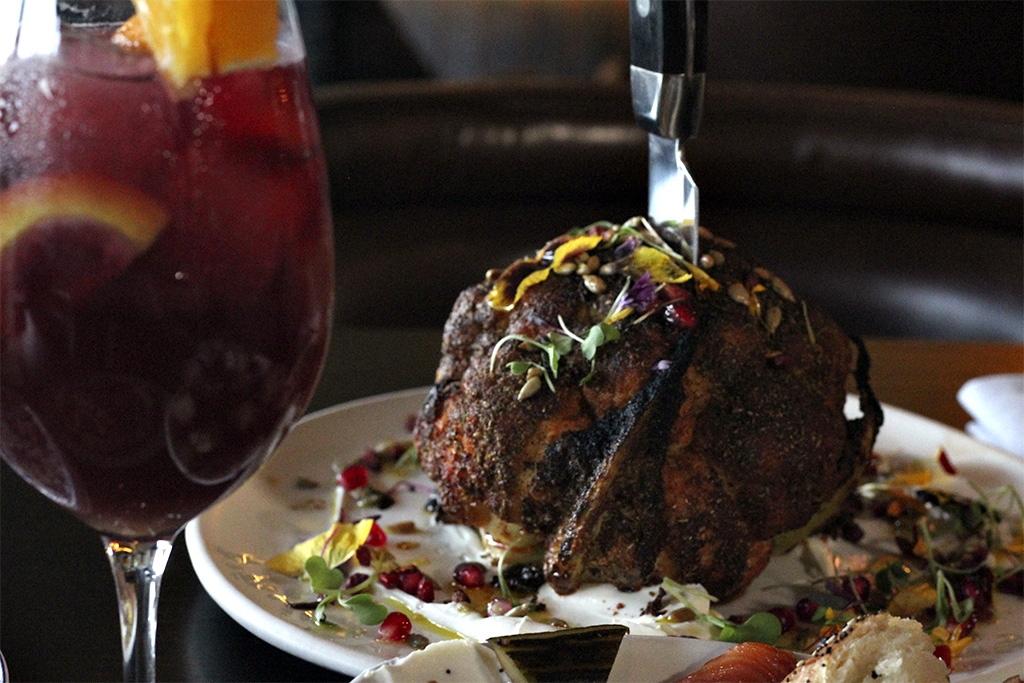 A whole head of cauliflower ($18) which has been brined for 24 hours and roasted and smothered with sumac, paprika and other spices, served alongside a dollop of yogurt is presented impaled with a deceptively heavy knife and looks to have been born of a moment rather than any geographic locale: its influences can be traced to globalism, plant-based eating docs and Instagram. But it’s velvety in texture and fork tender, with an intoxicating char that keeps you carving. 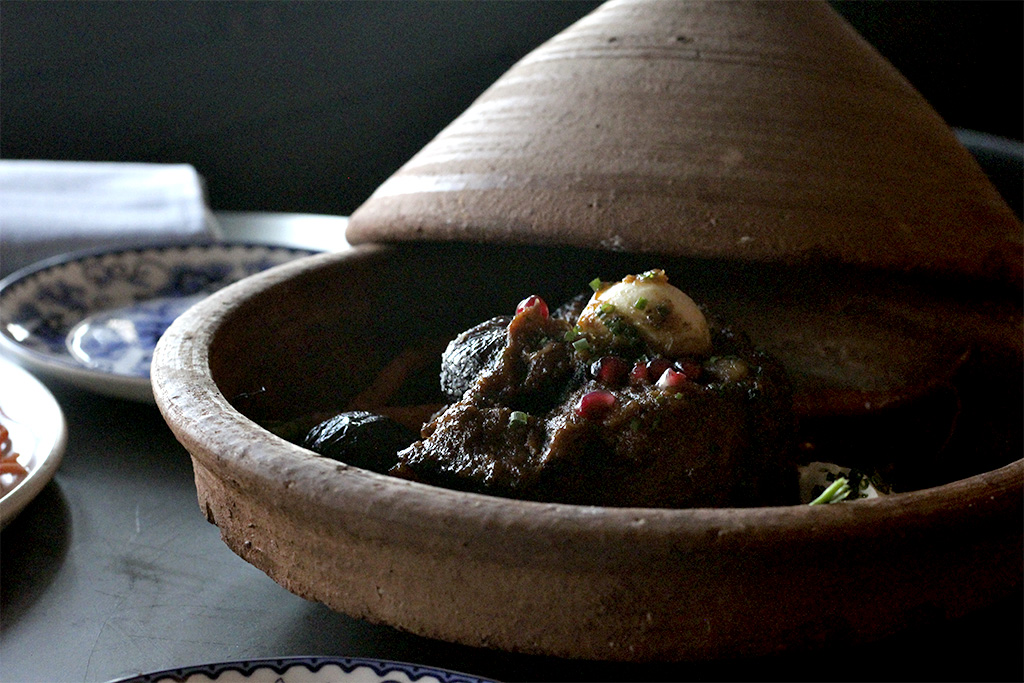 So is the lamb tagine ($36), which is a top seller here. It’s a Turkish-ish melange of slow-cooked lamb in a barbacoa sauce, root vegetables, labneh and a sprinkling of pomegranate seeds that Moshe described as a little bit of Mexico, a little bit of India, but primarily Turkish. It, too, is lusciously soft and compulsively edible, blending warm, earthy spices with pops of sweetness from the pomegranate and tangy labneh. 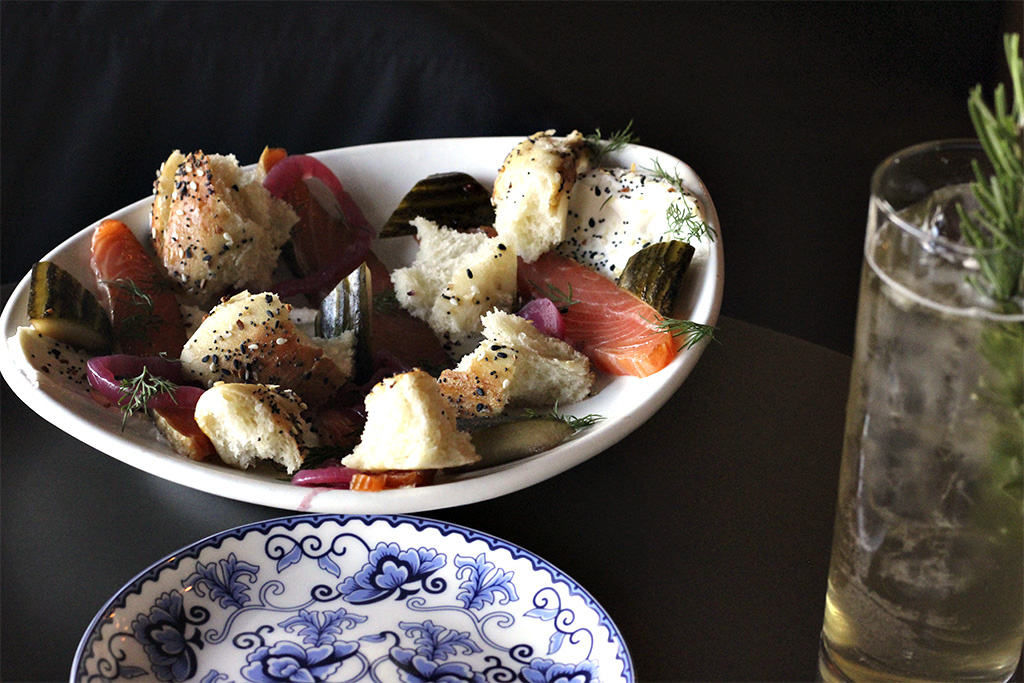 The smoked salmon plate ($15), an elegant tangle of torn chunks of house-baked cimet bread (they bake fresh bread for their lunch service as well as for dinner) with bagel spice, thick slices of cold-smoked salmon and labneh is comfort on a plate. 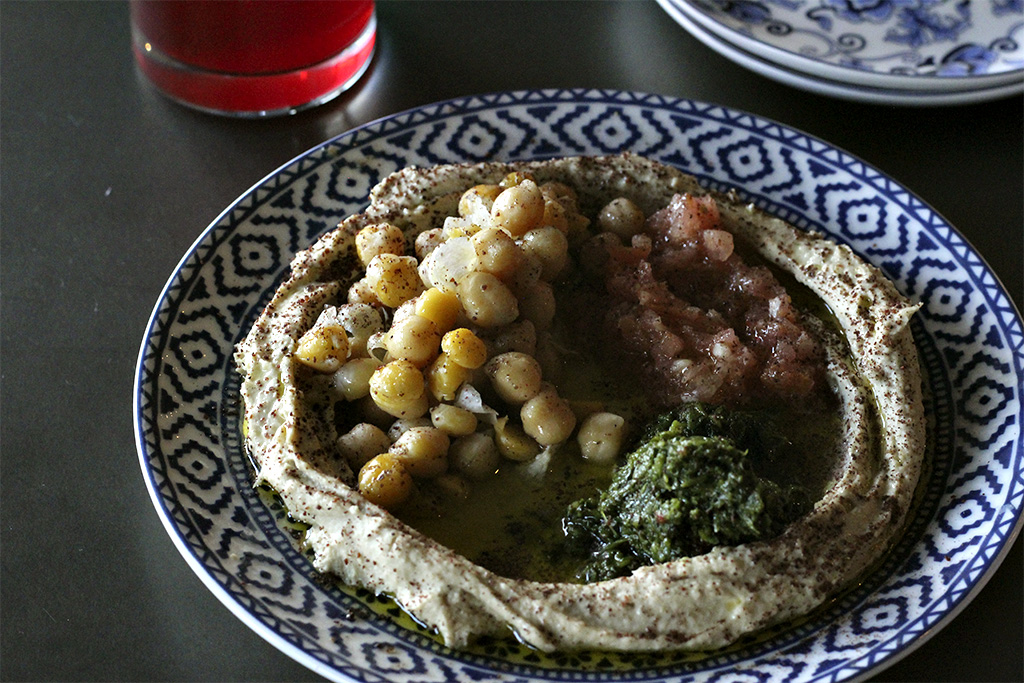 Their hummus ($12) is made with fava greens and raw tahini, resulting in a creamier, lighter bite. 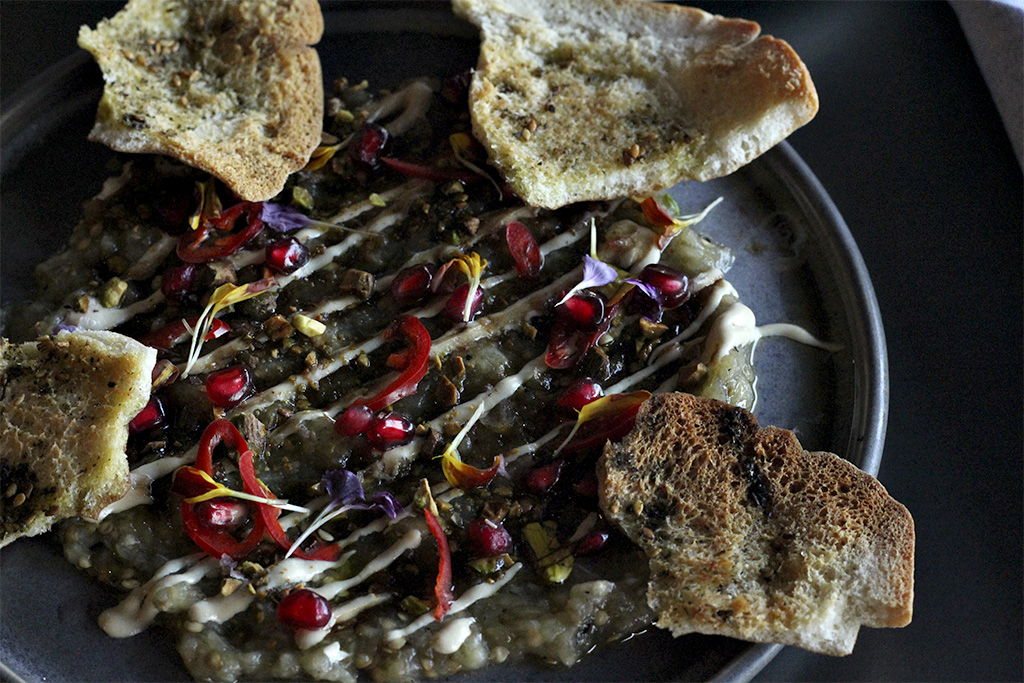 The charred eggplant ($13) is a hefty spread of eggplant charred over the hearth, with date molasses and raw tahini. 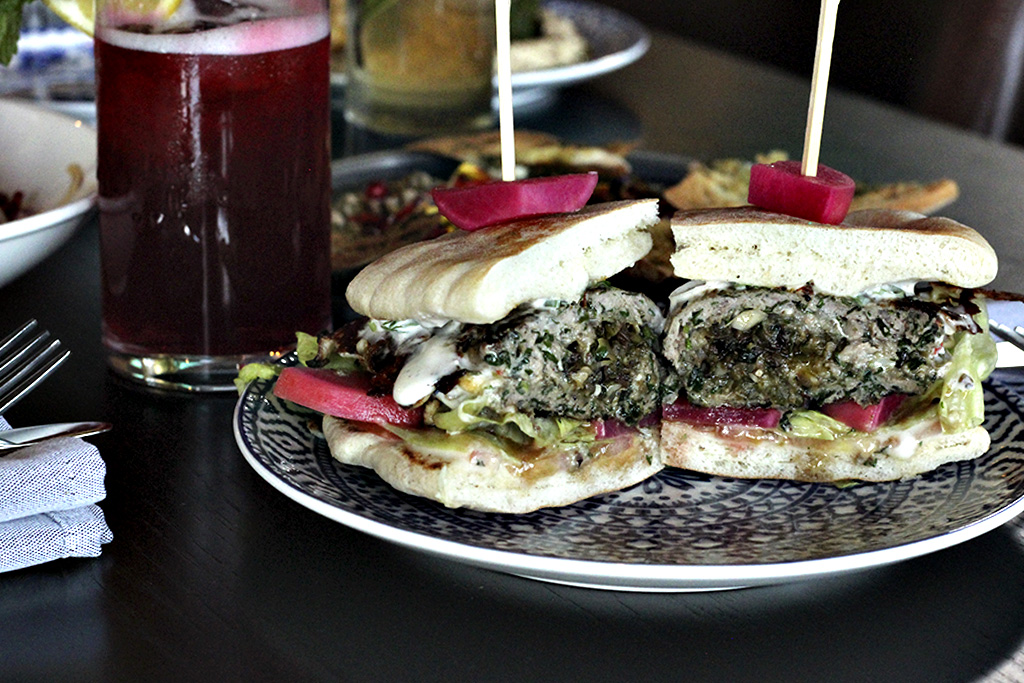 The lamb burger ($22) makes a great app for two and a light meal for one — an umami flavour-bomb, the burger layers a lamb patty topped with crispy halloumi and mozzarella cheese, with olive tapenade, capers and black olives on soft pita. 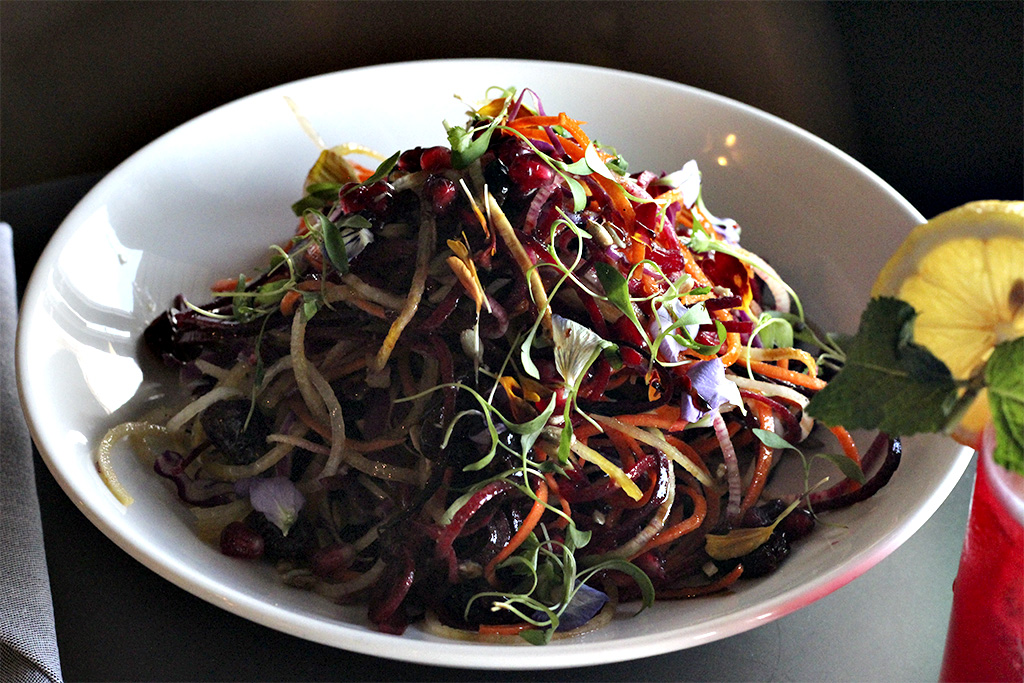 The roots slaw ($13) is a zesty counterpoint to the charred meats, with pickled carrots and red and yellow beets topped with pomegranate seeds, cherries and pomegranate molasses under a bright citrus dressing.

Currently, all of the cocktails at Babel are wine-based (a strange zoning bylaw from the ‘70s has prevented them from getting their full liquor license), so every night is sangria and spritz night. If there are any Mediterranean influences here, they are vaguely Italian and Spanish, with drinks made with spumante and three sangrias, all $10. 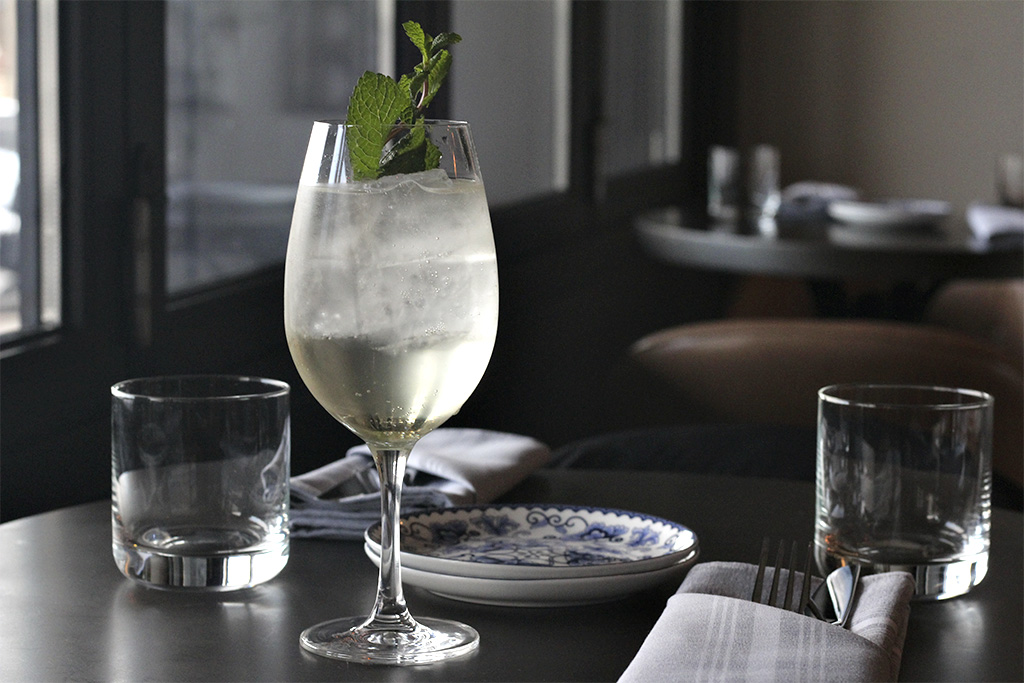 The elderflower sparkler ($10) is built on ice, combining prosecco and elderflower and mint syrup and a splash of soda. 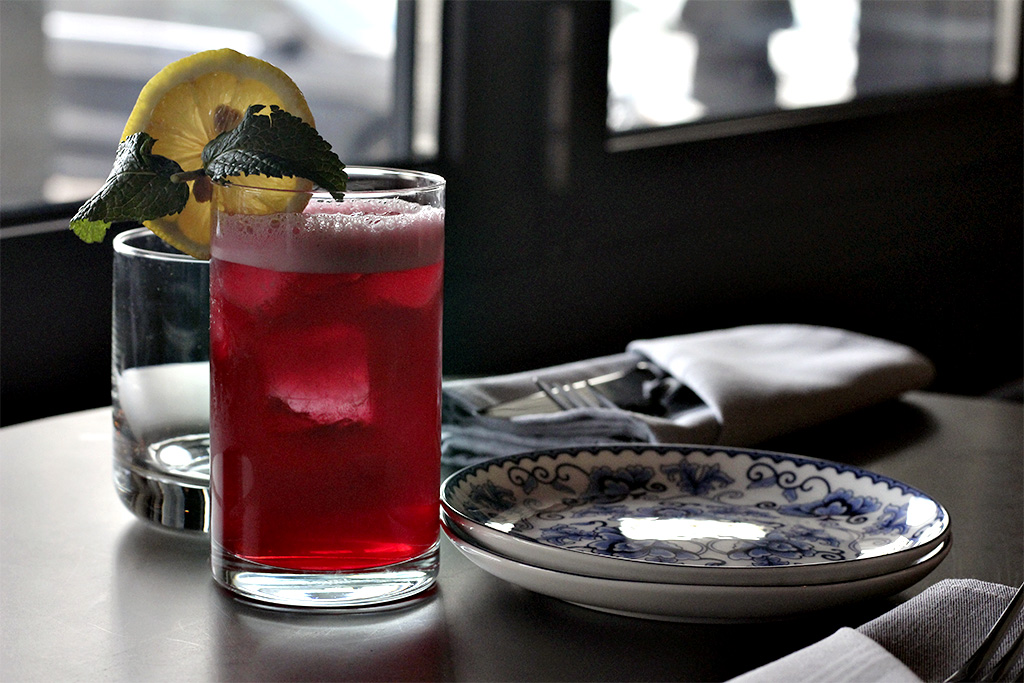 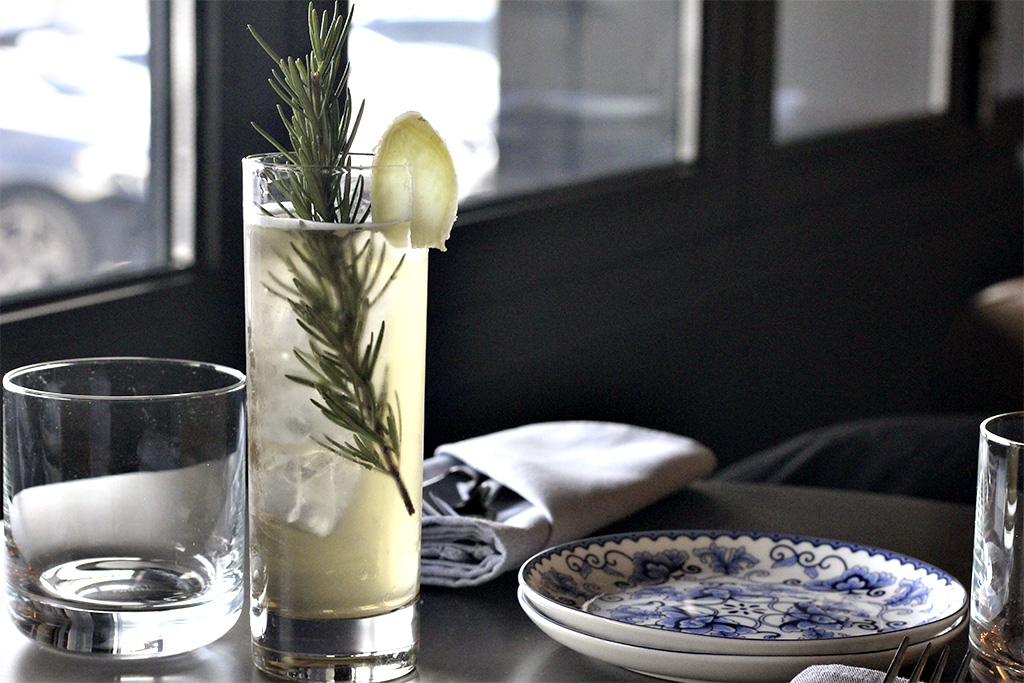 The rosemary lemongrass ($6) combines rosemary syrup and lemongrass tea and is completed with sliced fresh ginger, lime wedge and a sprig of rosemary.

Babel's mocktails are as, if not more, ambitious as their cocktails. A hibiscus iced tea is made with lemon smoked from the hearth and honey ginger syrup, and the tangerine cream ($7.50) is a tropical dream, topped with coconut cream foam.

The space that is now Babel used to be a Marché Mövenpick, but they’ve transformed the formerly cavernous digs into an earthy and bright 134-seat dining room, with comfy velvet booths and sunlit high-tops by the window, courtesy of DesignAgency. The 45-foot mural, a modern take on ancient cave drawings by Moss & Lam studio, ties the place together and leads the eye from the yellow agate stone bar at the front to the open hearth at the back, over which hangs many of the menu offerings.

The space can also accommodate private events, with a discreet private dining room that seats up to 52 guests.

Babel is already a neighbourhood classic, and is likely to stay that way. O&B has been a good neighbour to North York, with reliable and beloved restaurants at Bayview Village to the north and Auberge du Pommier to the west. But if it isn’t the hospitality group’s track record that gets customers through the door, it’ll be the intoxicating smell of woodsmoke on a cold day that does.