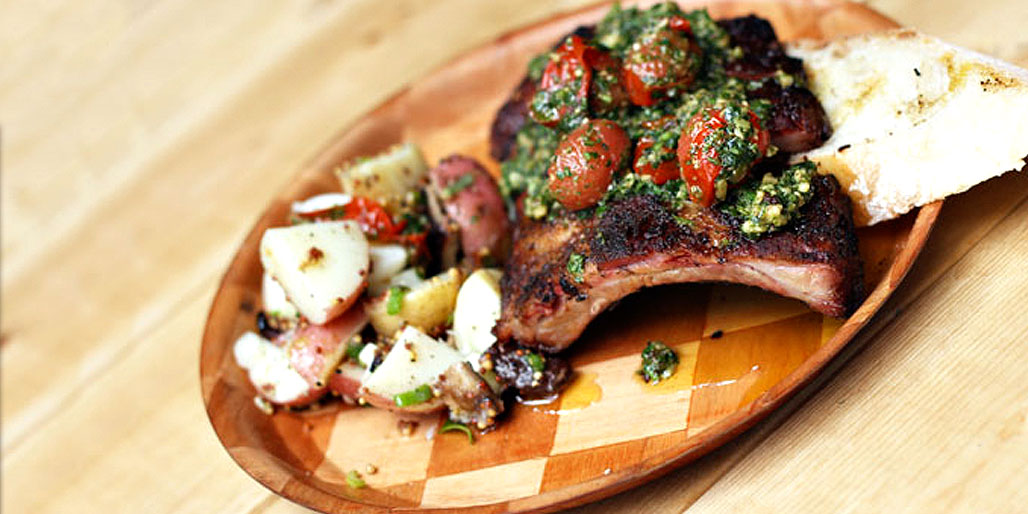 Anthony Rose’s newest venture, Big Crow, is tucked behind his contemporary diner, Rose and Sons. The sign is not easy to see, so just follow the other rib-hungry patrons as they shuffle down the adjacent alley. Once you’ve hit the woodpile under emergency escape staircase, you’ve made it.

It took three months to convert this once-grassy Annex backyard into the city’s newest grilling mecca. Rose and his partners Robert Wilder and Chris Sanderson erected a retractable roof (to keep out the rain and the sun), dropped concrete paving slabs and set up the kitchen and the bar inside two halves of the same shipping container, which has been cut in two. The open barbecue pit allows patrons to watch chefs work their magic over the ever-hot charcoal grill.

The long, family-style, pine picnic tables are reminiscent of a beer garden, but Big Crow isn’t trying to channel anything but pure Canadiana. The outdoor restaurant’s name comes from Big Crow Lake — all three co-owners had independently fallen in love with the scenic Algonquin Park spot. If it wasn’t for the triplet of oversized fans that blow the grilling smoke away from the dining area, there’s no question that Big Crow would smell like a campsite.

This is not low and slow southern-style barbecue, which demands days of marinating and hours of smoking — although the ribs ($16) and the jerk chicken wings ($12) do get a quick smoke over apricot, black cherry and apple wood.

“I like to call what we’re doing traditional Canadian barbecue,” Rose says. “It’s more like what you’d make yourself while tripping in Algonquin, or in your backyard. It’s fast.”

The savoury portion of the menu is divided into four sections: appetizers (“crow start”), small meals (“little crow”), hungry man meals (“big crow”) and sides (“eat crow”). While the culinary inspiration behind Big Crow may be camping, there’s a lot on this menu you’re not likely to see grilled by the campfire, such as lemon-and-herb smothered lobster ($36) and rabbit with honey-butter hot sauce ($32 for the whole hare).

The verscht ($9) — kosher beef salami sliced up and thrown on the grill — is, somewhat surprisingly, one of the menu’s best sellers. It comes slathered in a chunky apricot glaze and is served with a piece of crusty Thuet bread. All mains, big and small, come with the French-style bread — perfect for mopping up your plate.