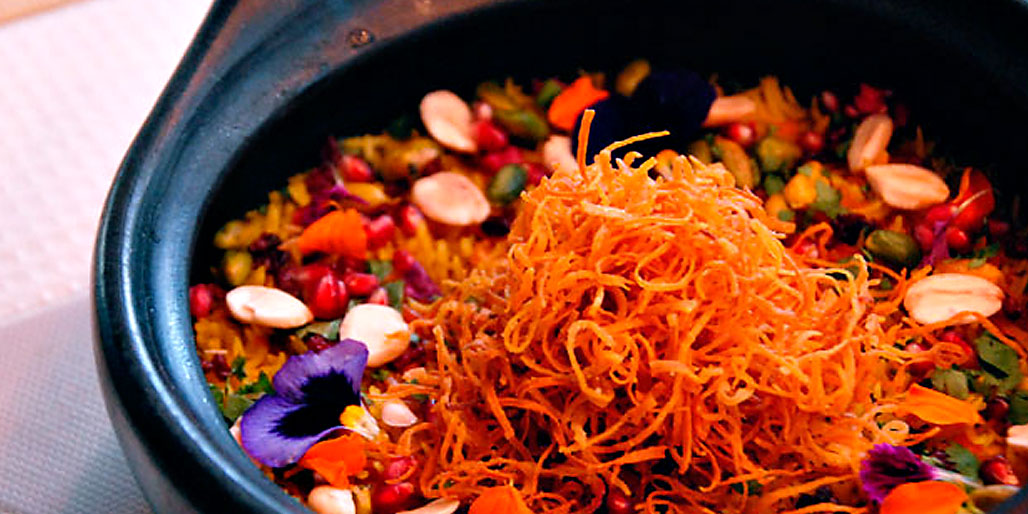 In continuing their steady takeover of Toronto’s dining scene — following the openings of the hugely successful Weslodge Saloon and Patria — restaurateurs-du-jour Hanif Harji and Charles Khabouth had originally planned to open a seafood restaurant as their latest venture. Then, Harji took a business trip to the Middle East, where he experienced food that he knew he had to bring to Toronto.

“I was blown away by all of the different flavours I’d never tasted before,” Harji says.

Thus began nearly a year of preparation for a new concept, Byblos, which opened last month at Duncan Street’s Storys building. The food, described as “eastern Mediterranean cuisine,” was new territory for executive chef Stuart Cameron, but he says it wasn’t that far of a leap from the Spanish food he’s doing at Patria. Still, with Byblos, Weslodge and Patria under his belt, plus catering gigs, Cameron is feeling the pressure.

Cameron researched the menu extensively; he read books, traveled to Morocco and ate at Lebanese restaurants in Montreal. His menu, executed with the help of chef de cuisine Jennifer Nickle (formerly a sous chef at Patria), takes cues from countries such as Lebanon, Israel, Morocco and Greece. Couscous is hand-rolled on-site daily, and Barbari bread (a type of Persian flatbread) comes fresh from Patria’s wood-fired oven.

There are small sharing plates (like Maltese-spiced olives, $5, or the tomatoey shakshouka, $9) along with larger plates (like a dry-aged rib eye spiced with Middle Eastern herbs, $39, or grilled cod wrapped in grape leaves, $17). Basmati rice ($16-$19) is made in earthenware pots, and it’s made to order, not unlike the paella at Patria. Meanwhile, bar manager Wes Galloway has put together an extensive cocktail list to pair with the food. His Gulab ($13) is made with rose-infused vodka and a house-made pomegranate reduction.

Décor is the product of Commute Design, featuring lots of wood, tile and intricate light fixtures, including a collection of porcelain lanterns above the bar. With around 120 seats over two levels, Byblos isn’t small, but considering that Toronto is completely obsessed with Mediterranean fare these days, it may not be big enough.