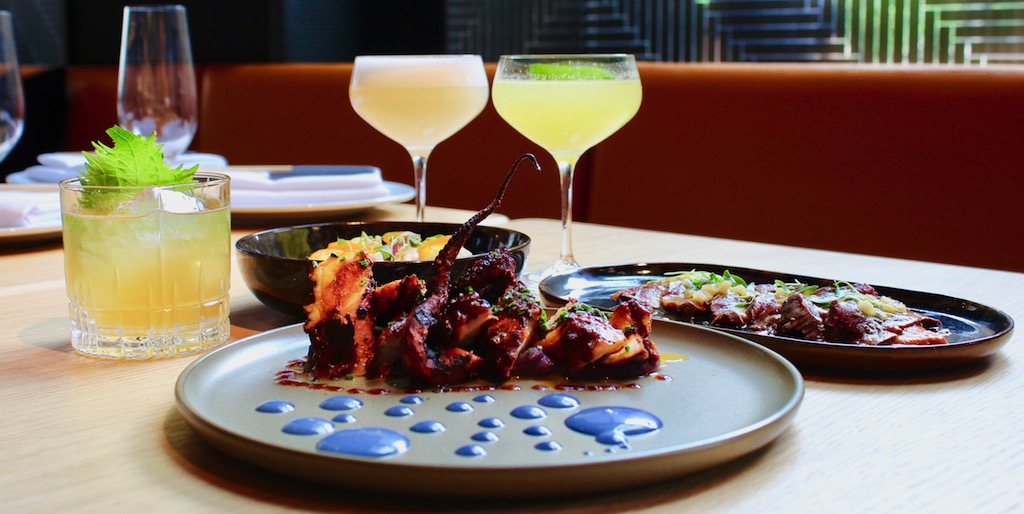 Despite its long history, Nikkei cuisine often comes as a surprise to North American diners. Bringing Peruvian ingredients and Japanese techniques to the same plate, Nikkei is a culinary bricolage that’s the result of over a century of Japanese immigration to Peru. Relatively simple methods yield big flavour payoffs in this culinary category, and with over 120 Nikkei-inspired dishes on the menu and a 10,000 square-foot space on Bay Street, Chotto Matte is ready to bring Nikkei to Toronto in a big way.

“The idea of doing this came about in 2004 when I was in Shanghai,” says owner and founder of Chotto Matte, Kurt Zdesar. “I hadn’t really ever thought about Peruvian cuisine before, but I discovered a Nikkei restaurant in Shanghai and it was just amazing. I was there doing research for a completely different concept and I wanted to stop that project there and then because I thought: this is what I should be doing.”

Zdesar has opened locations in London, Miami, and Saint-Tropez to date, and the new Toronto location will be the Canadian debut. While the flavours of Nikkei were what initially won the team’s hearts, Zdesar’s concept for Chotto Matte is deeply rooted in a desire to engage all the senses. The restaurant overflows with colour, and graffiti-style artwork connects the Canadian project to the first location in London, where street artists from Japan were flown in to paint the original space.

“When I met with Kurt to discuss the project,” recounts executive chef Jordan Sclare, “he showed me a document of what he was thinking of and none of it was food related. The first ten pages were all about the colours of Peru—the knitting, the clothes—we were to get all of these colours into the food. And then you look around the restaurant—the graffiti, the furniture—it’s all around.”

Chef Sclare was trained in French and European cooking under renowned culinary mentors such as Anton Edelman and Gordon Ramsay, and yet his decision to devote the next decade of his career to Nikkei cuisine was a simple one. Sclare can still remember the career-changing impact his first taste of Nikkei had on him.

“The best taste I’ve ever had are these Chotto Matte Nikkei flavours,” says Sclare. “I was working at Nobu, which is actually where I met Kurt, and I deep-fried a lobster. If I were to deep fry a lobster at Gordon Ramsay’s, he would say, ‘What the hell are you doing? Get out of my kitchen!’ But in a Nikkei environment, it’s one of the best things you can do. I knew then that I wanted to become the best Nikkei chef I could be.”

The duo has since worked together in crafting their ideal Nikkei experience, from the music that floats around diners to the custom-designed furniture of their new AkACHAN lounge which will be unique to the Toronto location. In addition to an impressive cocktail menu, the bar will serve Japanese, European, and Canadian brews, including Zdesar’s self-professed favourite beer: Octopus Wants to Fight IPA from our own Great Lakes Brewery.

The food is perhaps the best testament to the team’s passion for Nikkei. The dishes explode with colour and the flavours are as surprising and impressive as the history they represent.

The Chotto ceviche ($18.50) is a medley of sea bass sashimi, sweet potato, Peruvian corn, cilantro, chive oil, and citrus sauce. The sea bass is sliced thinly in Japanese sashimi style but prepared with Peruvian techniques of marinating the fish in the acidity of lemons and limes. The fusion of techniques allows the kitchen to prepare each portion of ceviche to order, rather than requiring it to marinate overnight.

The tentáculos de pulpo ($25) is listed among Chotto Matte’s signature must-tries. Octopus tentacles are grilled on an open flame and served with yuzu and purple potato for deep flavours and rich textures.

The Canadian debut of Chotto Matte has been in the works for several years, and Zdesar is eager to finally open the doors. He’s also keen to have long-time fans come by and see what’s been accomplished in the newest iteration.

“I like to evolve my brand and apply what we’ve learned to make each location better than the last,” explains Zdesar. “Toronto is the best of what we’ve done so far.”

The vibrant restaurant is serving Nikkei cuisine in Toronto and we want to send you and a friend for dinner. 🦑 To enter: . 1. Like this video 2. Follow @postcityto and @chottomattetor 3. Tag a friend in the comments . Two lucky winners will receive a $100 gift card to the resto. Founder @kurtzdesar of @chottomatteofficial and chef @jordansclare give us the scoop on what to expect. Contest ends July 2nd.