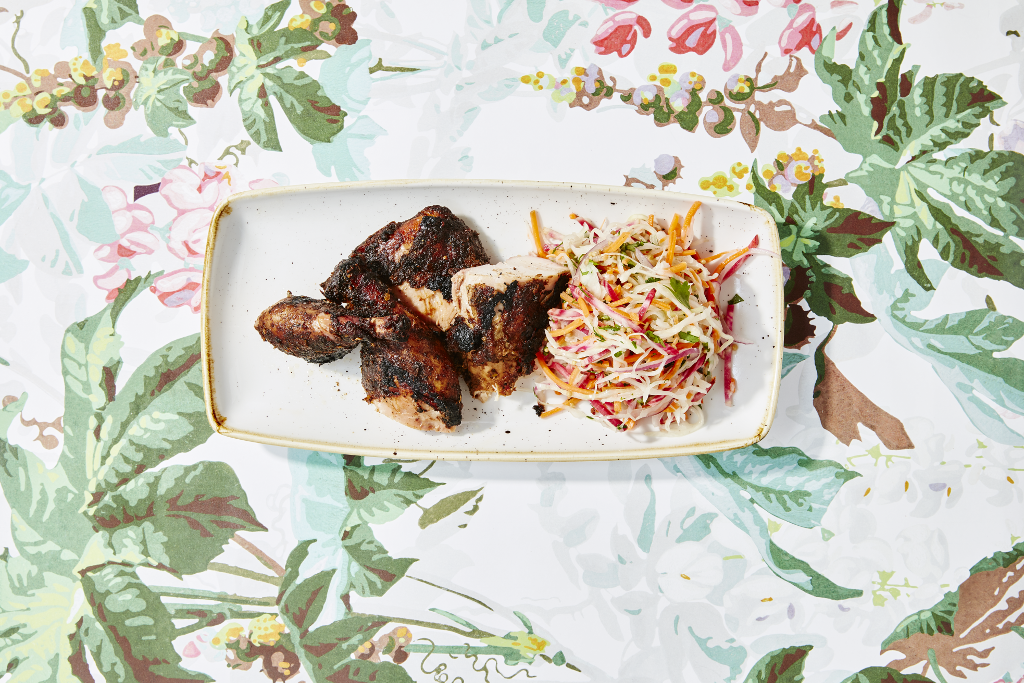 Janet Zuccarini, Gusto 54 Group’s boss lady and recipient of the 2017 Pinnacle Awards Independent Restaurateur of the Year, is expanding her portfolio of ethnic eats. The restaurateur is partners with Pai and Kiin, but Chubby’s Jamaican Kitchen marks her first independent, non-Italian joint, just a stones throw from King West staple, Gusto 101.

Chubby’s is housed in a 127 year-old row house meant to capture the “essence of a Caribbean home,” says Angela Lawrence, a long-time friend of Zuccarini’s and the development lead on the newest addition.

The two-storey restaurant was designed by Partisans (the designers behind Bar Raval) who repurposed many of the house’s elements, such as the wood slats on the main floor and the steps on the second floor wall, which once led up to an illegal third floor. Textures, shapes and colours create a “vibrant, tropical, Caribbean experience” with African print textiles which are featured on both the banquettes and the lampshades alongside a wall of African wicker baskets.

Lawrence’s vision for Chubby’s is to take Jamaican cuisine and “do it in a Gusto way.” Lawrence shares her passion for Jamaican cuisine on her cooking blog, Cook Like a Jamaican, where she dishes out recipes alongside her mother. Together with chef de cuisine Donovan Campbell (also of Jamaican heritage), the team hopes to continue Gusto 54’s crusade of “creating transporting experiences.”

Lawrence says that “getting it right in terms of authenticity,” is key if you want to “do justice to all the traditional home-style cooks,” including of course, her mom. “People don’t get the breadth of Jamaican cuisine – it’s more than beef patties and jerk chicken,” she adds.

The menu draws inspiration from island flavours. It’s a “traditional menu with modern and culinary enhancements,” says Campbell, who’s worked with culinary greats such as Mark McEwan. While salads aren’t exactly a staple in Jamaican cuisine, “the flavours are rooted there,” says Campbell. The menu is a reflection of how Torontonians like to eat.

“People don’t get the breadth of Jamaican cuisine – it’s more than beef patties and jerk chicken.”

Take for example the Ackee & Salt Fish Dumpling. While the iconic dish is normally a meal in and of itself, Campbell has taken it and made them into bite-sized “Likkle Bites” so one can leave room to explore the rest of the menu. The menu has also been updated to accommodate vegans and celiacs alike, with offerings like Jerk Tempeh on offer.

Those looking to stick to the more traditional side of things can find familiar favourites such as the trio of Likkle Jamaican Patties, a buttery house-made pastry stuffed with tamarind beef, curry turkey and curry shrimp. The Jerk Pork features both belly and buckeye (aka pork loin) and sautéed greens and comes hot off the pimiento-wood fired grill. For more complexity one can turn to the curries (chicken and goat) – which feature Campbell’s house-made spices that are toasted to extract the oils to add flavour.

For dessert, instead of your usual rum cake there’s a Carrot Sponge Layer Cake. Campbell tells me that Sunday supper usually consists of carrot juice (Don’t ask why – “it’s just how it is”) where the residual pulp would be used to make carrot cake. His “haute” version incorporates maple buttercream, coconut meringue and vanilla bean gelato.

To quench your thirst, look no further than the rum-centric cocktails including the Chubby’s Rum Punch (on tap) and the Instagram-worthy (and sippable) Calabash Bay, a sort of adult piña colada served in a pineapple.

There is also a “Rum Bar” section of the menu which encourages diners to “sip seven of the world’s best rums,” and includes Noxx and Dunn 2-4-5 from Florida, and St. Lucia Admiral Rodney Extra Old to name a couple. The wine list is a mish mash of Old World and New World, no doubt to complement the menu. Plus, there’s also good old Red Stripe or a selection of non-alcoholic juices such as Sorrel Punch made with hibiscus blossom, ginger, lime and pimento.

When the snow thaws, expect both a front and back patio which will seat 20 respectively. A lunch service is also in the works.