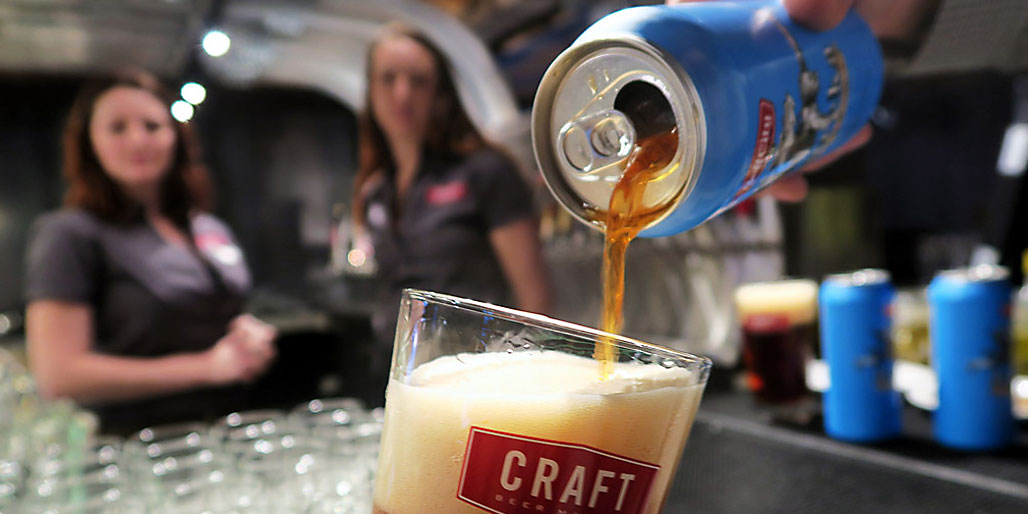 Taps are pouring at the first Ontario location of CRAFT Beer Market. Originally from Calgary, the two-storey restaurant has set up shop at Yonge and Adelaide.

When you first step into the space, your attention will be drawn to the stainless steel pipes running along the ceiling straight to the bar. These pipes are an extension of the beer kegs and create an impressive “cathedral” of beer. All of the kegs are kept on display in a glass-enclosed keg room that holds over 250 of them. Each pipe has 12 chilled lines wrapped in insulation so that there is no condensation on the tubes. Beer is maintained at 38°F. 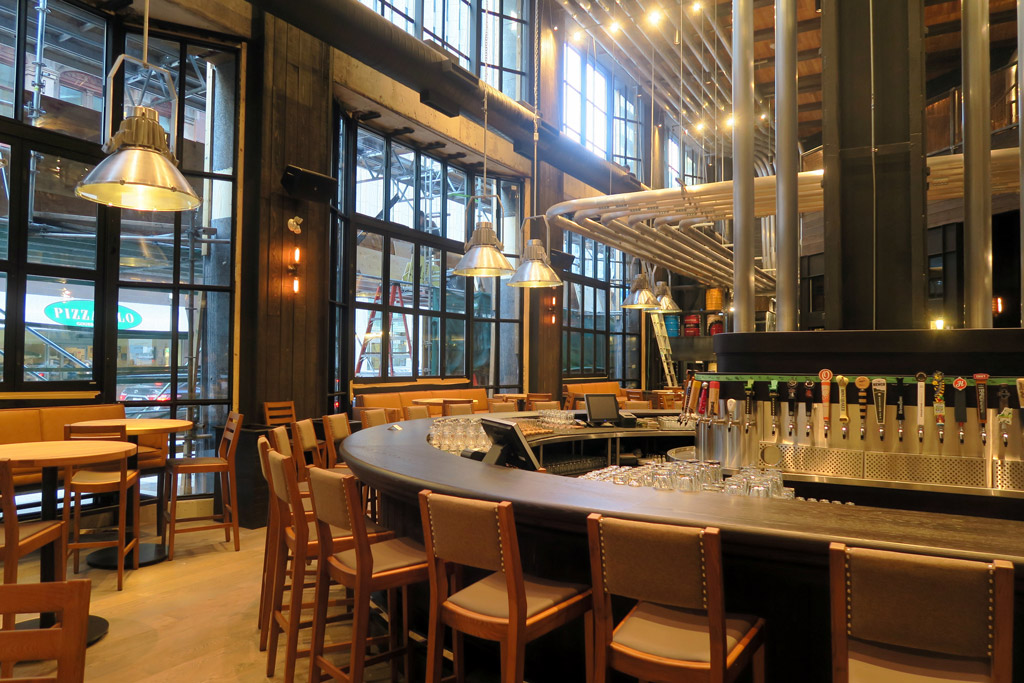 Beer isn’t the only beverage running through the pipes, four red and four white wines are also on tap.

The sprawling space can seat 400 guests over two floors and includes private spaces on both levels for corporate events and parties. Large windows will open onto Yonge Street when the weather is nice, and windows at the back of the restaurant will open onto their beer garden. Next summer, the 250-seat outdoor addition will be a welcome downtown oasis for beer drinkers. 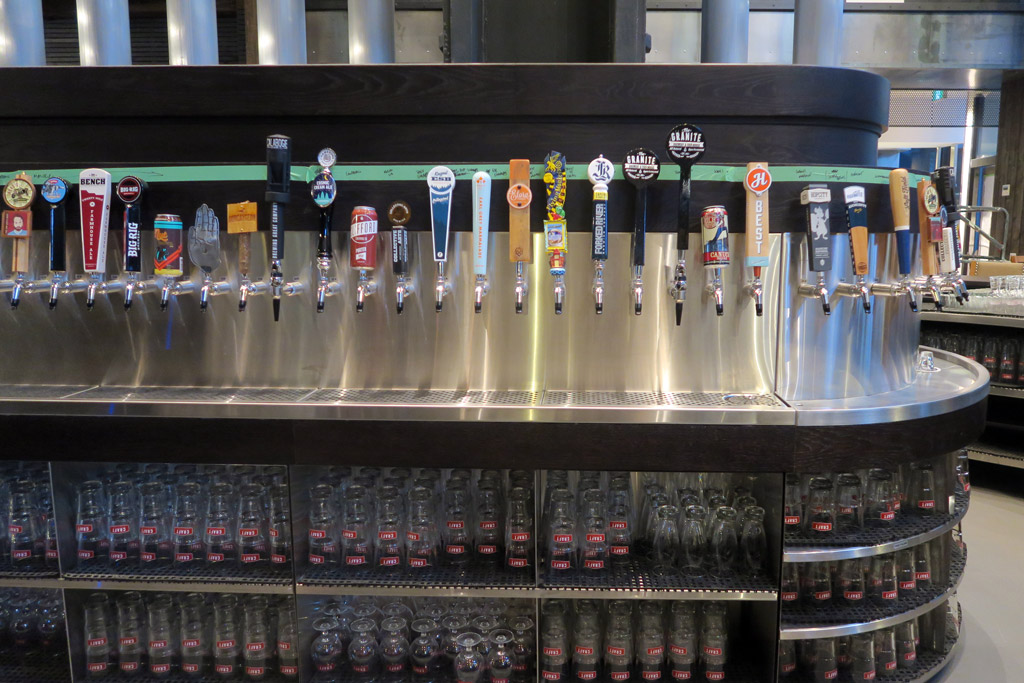 At the bar, you’ll find 160 taps of ales, lagers, ciders and wine, of which 20 will rotate regularly. Thanks to a surge in popularity of craft beer in recent years, it’s easy to fill the taps at CRAFT. When they first opened, they had a hard time finding craft breweries to supply their bar. Some of the smaller breweries couldn’t keep up with the demand, and there simply weren’t enough breweries.

Now, six years later, they definitely no longer have that problem. Here in Ontario they have over 200 craft breweries to choose from and lay claim to having Ontario’s largest selection of craft beers.

Each brewery has the opportunity to decorate a wrapped keg that are displayed on keg racks in the restaurant. Some are hand painted and others are vinyl wrapped, all are unique.

One of the ways that CRAFT gives back to the community is through their Community Brew. They pair up with a local brewery, and a local or national charity. The brew is added to the menu, and $1 of each beer sold goes directly to the charity.

Looking for some food to go with those brews? CRAFT has a large menu to suit many tastes. Nothing is poured from containers here — all sauces, breads and buns are freshly made in house. The kitchen is open so that guests can see dishes being created from top to bottom on both levels. 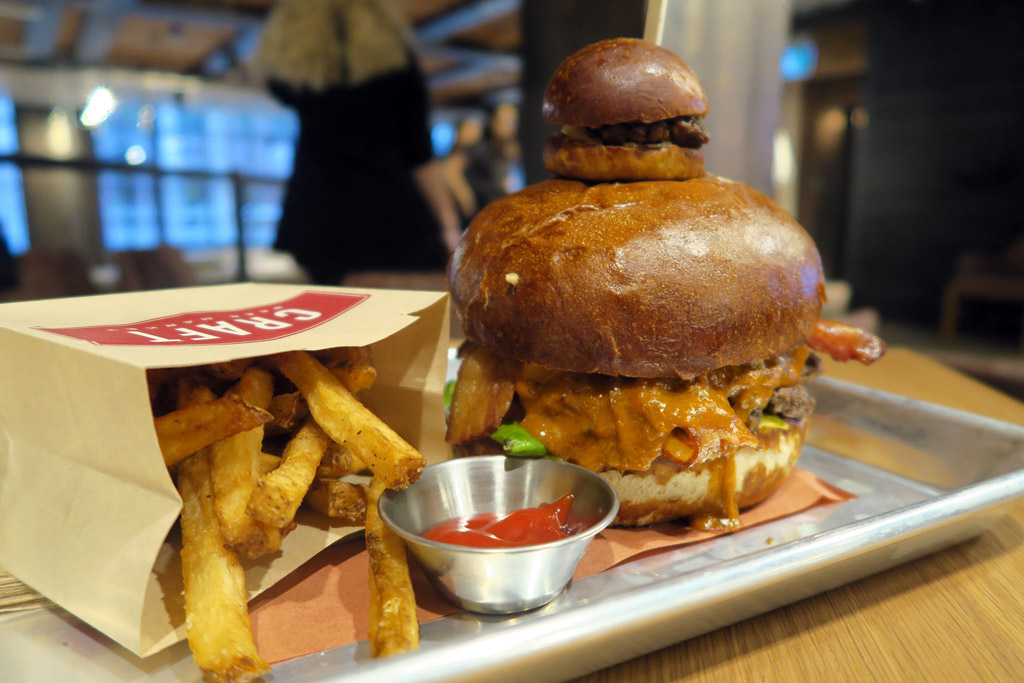 The 20-Napkin Burger ($26.50) is an impressive sight. Two premium beef patties slathered with house-made cheese sauce are topped with brisket and bacon and sandwiched between a baked in-house pretzel bun. Just in case that wasn’t enough burger for you, it’s also topped with a mini burger. 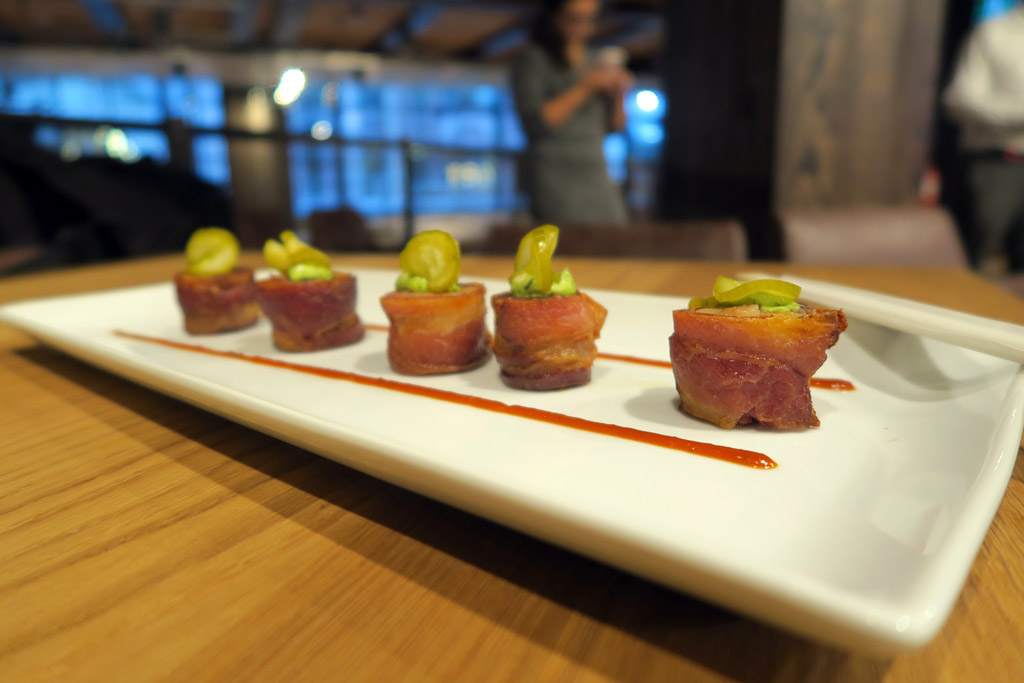 Fast Food Sushi ($14) is a nod to Epic Meal Time. CRAFT actually reached out to the creators of the popular YouTube series before putting this dish on their menu. The “sushi” is a cheeseburger with fries cut up and rolled in bacon. It’s topped with wasabi cream cheese and house made pickle, with Jack Daniels BBQ sauce on the side.