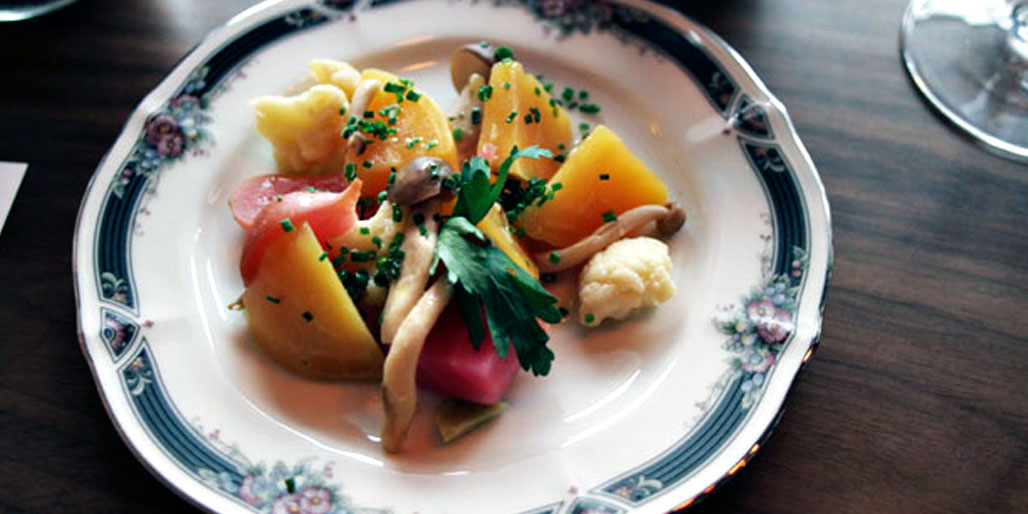 With the opening of East Thirty-Six last week, the St. Lawrence neighbourhood now has another upscale watering hole for after-work drinks. One of the owners, Julien Salomone describes it as an "Old New York cocktail bar that mixes 1920s style with a bit of modern decor."

Salomone is known in Toronto for his award-winning cocktails and for Boutique Bar on Church Street, which he runs with his wife, Devon Salomone. For East Thirty-Six, he plans to continue his focus on carefully crafted libations.

Many of these incorporate his own tinctures, extracts, and syrups. For instance, the French Connection ($13) gets a spritz of coriander tincture (high-proof neutral spirits are used to extract the flavour and aroma from coriander) as a final addition. Similarly, the Rum Row ($13) features apricot liquor, lemon juice, ginger syrup, and tonic, which are added to a base of house-spiced rum.

With a couple drops of smoke tincture and a base that's aged in a small oak barrel behind the bar, the E36 Boulevardier ($14) is the most on-trend of the current list of 11 cocktails.

Salomone is careful to note that while the food is served on small plates and was designed to complement the cocktails, it is still thoughtful, classic, and serious. That's not a surprise given that the kitchen team is led by Chef Brent Maxwell (Spencer's at the Waterfront, and several O&B properties including Luma, Biff's, Canoe, and Auberge du Pommier).

The Salomones and partners Stanley Bernard and Sebastian Moya (front-of-house manager) took possession of the space on January 20. In the two months since then, they have worked to make cosmetic changes to the decor to suit their design for East Thirty-Six.

Before the previous owners took a short-lived stab at the oyster bar concept, the space was occupied by Lucien. That restaurant had a long list of well-known Toronto chefs cook in its kitchen including Scot Woods, Guy Rawlings, Robbie Hojilla, and Grant van Gameren. Some of the existing elements, including the bar top and familiar wrought-iron work on the ceiling, were maintained.

With their focus on an upscale cocktail menu (with plenty of house-made ingredients); small, shareable plates; and a polished, refined decor, East Thirty-Six is a promising new entry onto Toronto's dining scene.