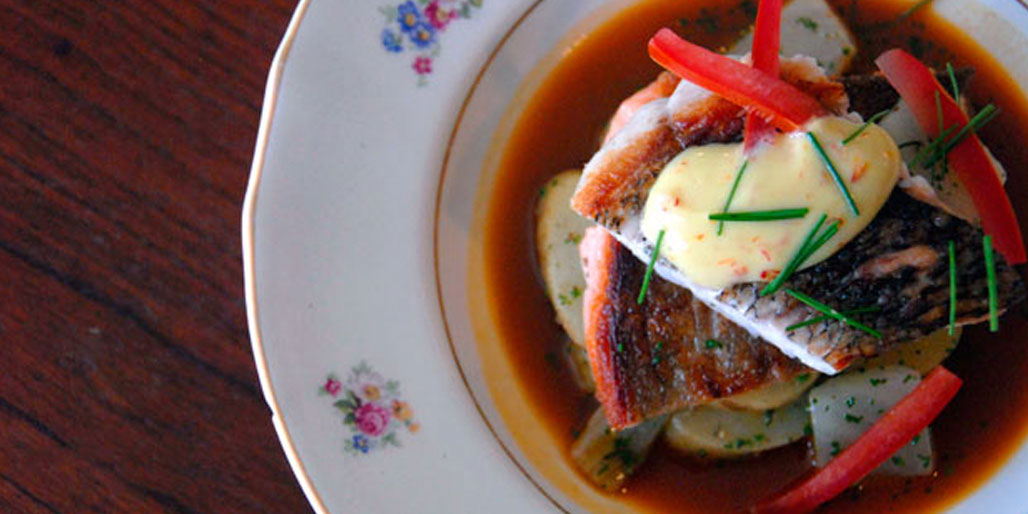 As a saucier at London’s hoity-toity The Savoy, Daniel Janetos cooked for some of the most illustrious clientele in the world. But he’d trade that any day for his current gig as head chef at the rustic Farmhouse Tavern, opened yesterday at Dupont and Dundas, where his carefully-curated menu highlights the best of Ontario’s bounty.

Farmhouse Tavern is the project of Darcy MacDonell, who was previously the general manager at Yorkville’s La Société. He’d had the concept mulling about in his head for a while, and recently ventured to New York City for inspiration — checking out such restaurants as The Breslin and Peels — along with a stop in Montreal to check out Joe Beef and Au Pied de Cochon.

The new restaurant features two rooms, match seating about 30 and each aiming for a distinct vibe: one has a straight-up farmhouse appeal, complete with barn doors, while the other is more of a tavern. A third room is currently in the works and should be ready to go in a month or two (vibe to be decided). A side patio that seats 42 also houses a wall of potted herbs (replete with mint, sage, chives, basil, thyme and more) as well as the restaurant’s custom-built smoker.

From the menu to the décor to the drinks, allusions to Ontario abound. MacDonell grew up on a farmhouse in Alexandria, Ont., and many of the restaurant’s myriad of antiques hail from that farmhouse.

For dinner, Farmhouse Tavern currently offers around four mains and four apps, and intends to eventually increase the selection to six to eight of each. In the open kitchen, Janetos — a George Brown grad who was previously sous-chef at Buca — sources his ingredients from such local purveyors as Jim Giggie, Best Baa Farm, Marc’s Mushrooms and more. Meanwhile, Ontario craft brews and VQA wines round out the drinks selection.

The Fish Dish ($24, pictured above) sees both Georgian Bay whitefish and Ontario rainbow trout set atop fingerling potatoes, with a pool of bouillabaisse underneath. On top is a dollop of garlic mayonnaise, along with pickled tomatoes for acidity.

The Farmhouse Burger ($15) showcases an eight-ounce patty made from ground chuck and short rib. It comes drenched in a sauce comprised of house-made relish and mayonnaise, and it’s all housed in a sesame seed bun.

With its rock music soundtrack and rustic-chic ambience, this is a west-end restaurant through and through — though Farmhouse Tavern does take reservations (and by text, too).