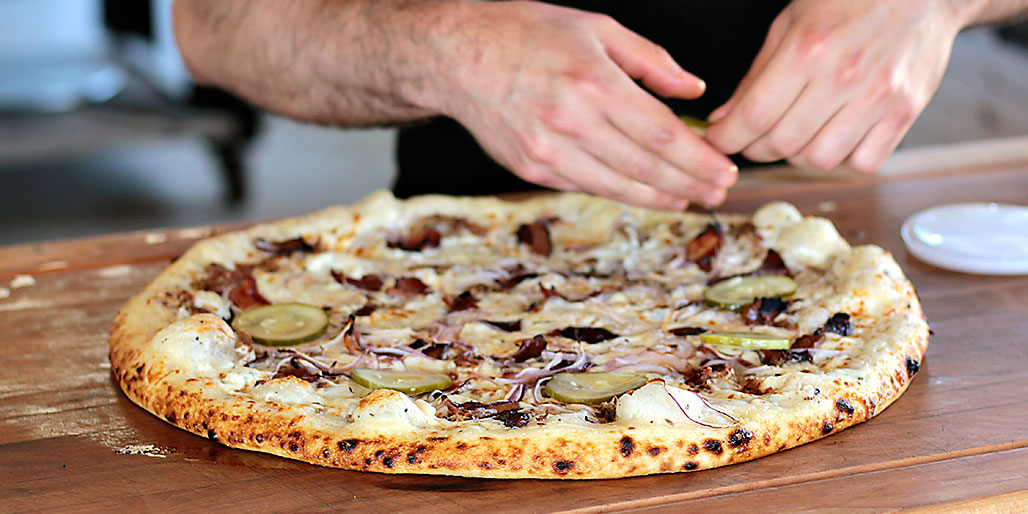 For some time there have been reported sightings of pizzas coming out of the space next to Adamson Barbecue. We can now confirm that the rumours are true. Adam Skelly had been dishing out pizzas as a pop-up before Conspiracy Pizza was ready for its close-up.

Midtown’s newest pizza joint is now in its soft opening phase and doling out 18-inch pizzas ranging from $20 for a plain old cheese pizza to $28 for the brisket pizza. The style of pizza served at Conspiracy is a “New York-Italian hybrid,” says their pizzaiolo, Dan Rios.

It’s that combination of foldable pizza that can withstand the weight of toppings with a “soggy” centre. There’s also a nice char on the crust which the team has dubbed “leoparding.” 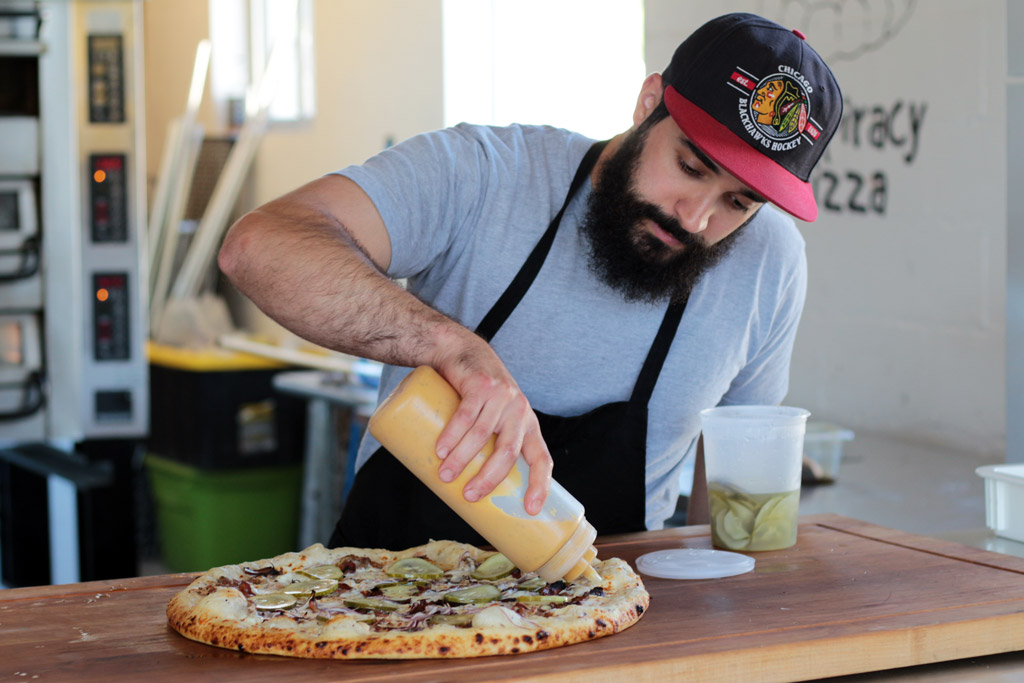 Dan Rios tells Post City that “we commit to the best ingredients for every aspect from meat to tomatoes to cheese.”

Those who balk at the price tag should take into account that all the proteins come from the oft sold-out-before-noon Adamson BBQ next door and that all of the mise-en-place is made in house.

“Leaside is full of industrial pizza joints, but we’re making pizzas you can’t get anywhere else,” says Rios. 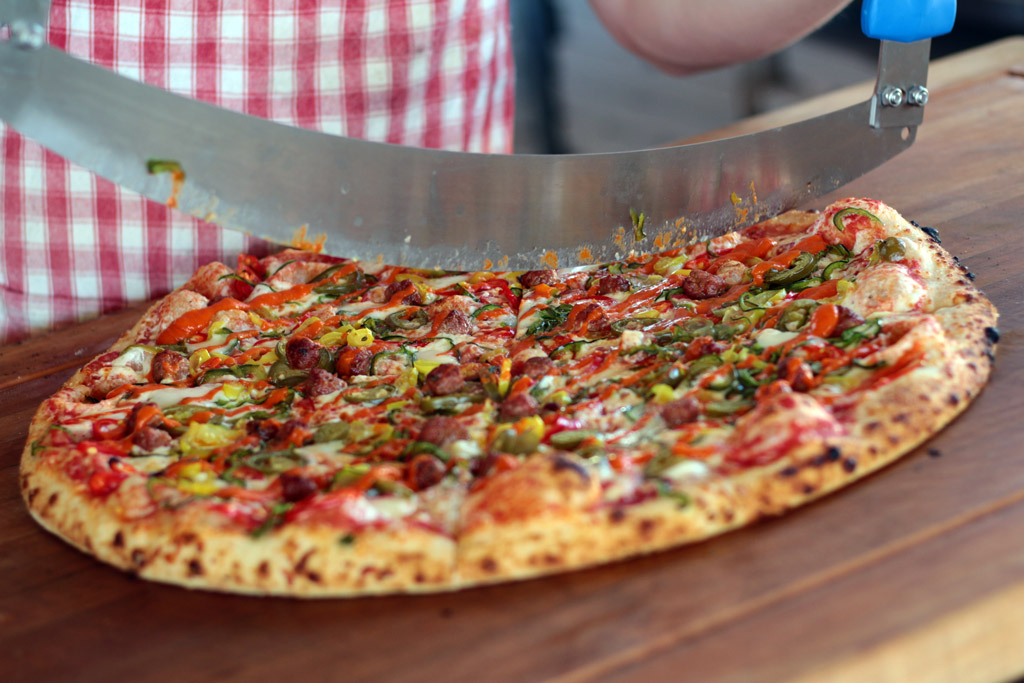 One example is the Bay of Pigs pizza, which is a “Cubano sandwich in pizza form” topped with pulled pork and bacon, smoked at Adamson, with red onions, pickles and mustard barbecue sauce.  Or the Cowspiracy, topped with buttermilk white sauce, mozzarella and gruyere, brisket, red onion, pickled jalapenos, ancho barbecue sauce with a dill pickle crust. That’s right, flavoured crust. The use of finishing sauces is not traditional by any means but “a way to elevate the pizza,” Rios explains.

The pepperoni pizza’s crust gets a brushing of ranch.

Vegetarians need not fret as there are great options available such as the Grassy Knoll, a pizza that was “backwards-developed from the name” and sees Tuscan, green and red kale topped with a trio of brown maitake, shimeji and cremini mushrooms and sunchoke sauce to top it all off. One might not even miss the meat. 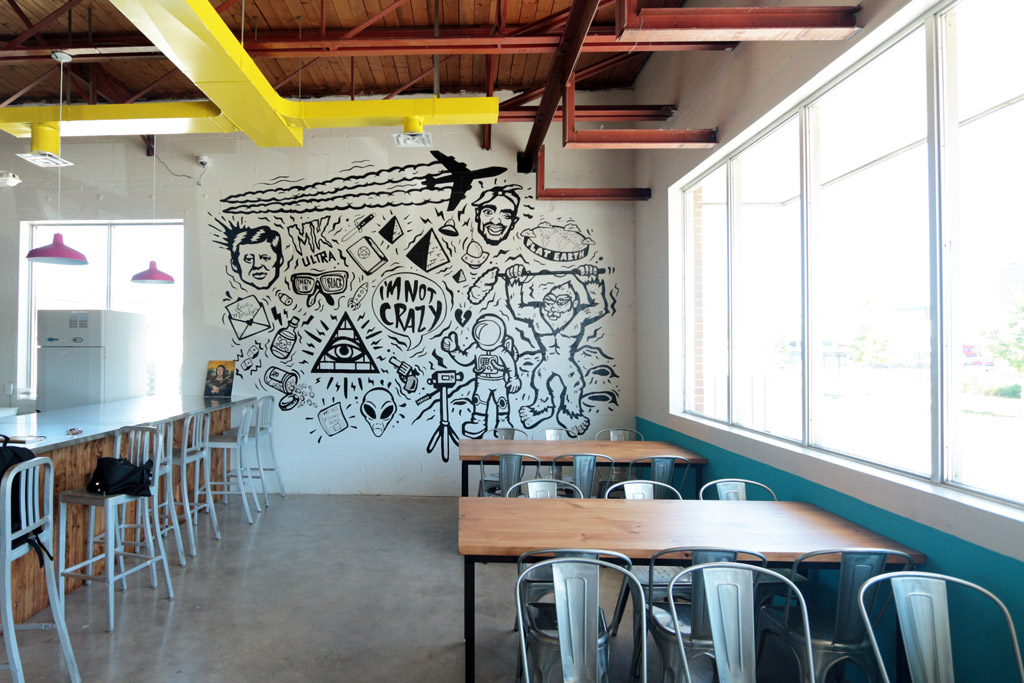 The pizza joint’s logo is a play off the Illuminati triangle and the giant mural is a mish mash of famous conspiracy theories ranging from “who shot JFK” to the moon landing.  By the way, rumour has it that Dictator Pizza was originally going to be the name of the pizza joint, but I guess now we’ll never know…