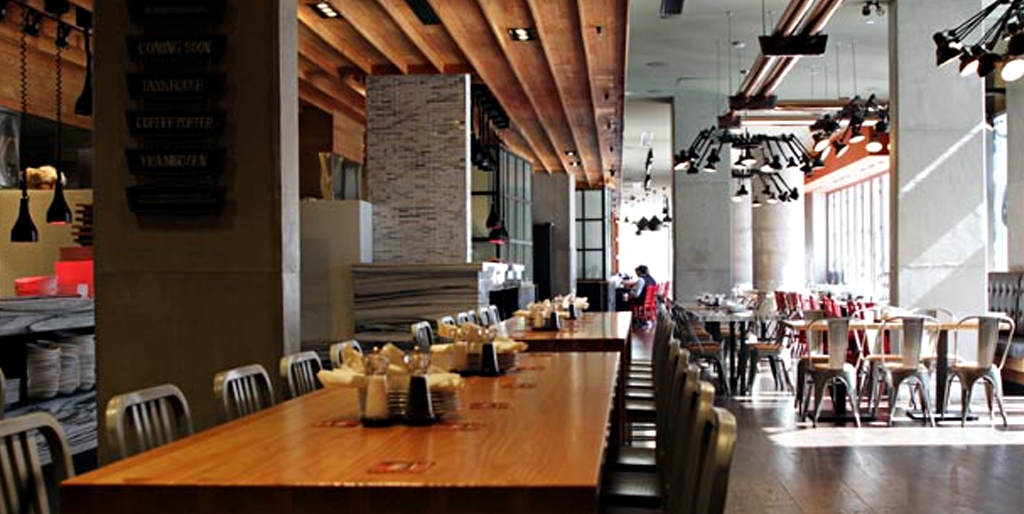 Just over a week ago, Mill Street opened a sizeable new beer hall — a light-filled, open space with communal tables and a glass-covered patio — as a complement to the Mill Street Brew Pub.

To celebrate the opening, head brewmaster Joel Manning and his team created three new beers that are exclusively available at the Distillery District location. They are the Distillery Ale (an English-style old ale), the Minimus Dubbel (an 8.5 per cent abbey-style dubbel with flavours of banana bread and vanilla from the oak staves added to the aging tank) and the Ampel Weiss (a tart Berliner Weisse style of beer).

Rightfully, Manning seems most excited about the addition of bierschnaps — a spirit distilled from beer — to the alcohol offerings. Beer brewed on-site is piped into a copper double-distillation system that produces a dry, clear, 90-proof spirit. Tankhouse, Frambozen and Coffee Porter were the first Mill Street recipes to get the schnaps treatment. As soon as Mill Street has all of the necessary approvals (sometime in the next two weeks) the bierschnaps will be available on-site, chilled and served in shot glass steins, or in wax-sealed bottles ($35 for a 375mL bottle) from the retail store.

When the special filtration system arrives, The Beer Hall will also offer hopfenschnaps (bierschnaps with extra hops added), which Manning describes as the “hoppiest thing you’ve ever drank in your entire life” due to the addition of a “wheelbarrow full of hops during the distillation process.”

Chef Elizabeth Rivasplata (Frank, Top Chef Canada) has been hired to lead The Beer Hall’s more upscale, restaurant-style food program (the kitchen and menu are separate from the Brew Pub’s). Ricasplata has designed a menu that focuses on cooking with Mill Street’s beer (she works with Dolce Lucano to create cured meats, some of which that use the beer) and shareable plates that will easily divide between three or four people.

For a change from the charcuterie board idea, Rivasplata is offering a pork board ($29) that has a Frenched pork shank (lightly cured and roasted for a ham-like flavour), smoked pork belly, house-made bratwurst and the usual pretzel, mustard and choucroute sides. In the hearty meat department there is also a dish of braised short ribs ($29) made with Mill Street’s own root beer and served with a kale and apple salad.

The roasted beet carpaccio ($15) is a vegetarian and lighter option that combines two types of beet (one roasted, one raw) with pine nuts, sugar snap peas and torn burrata cheese.

For dessert, Rivasplata sticks to the beer-as-an-ingredient theme, including a changing selection of ice creams, like strawberry-rhubarb made with Mill Street Frambozen.

With new condos going up and the Distillery District continuing to expand as a tourist destination, Mill Street may finally be equipped to handle the crowds.