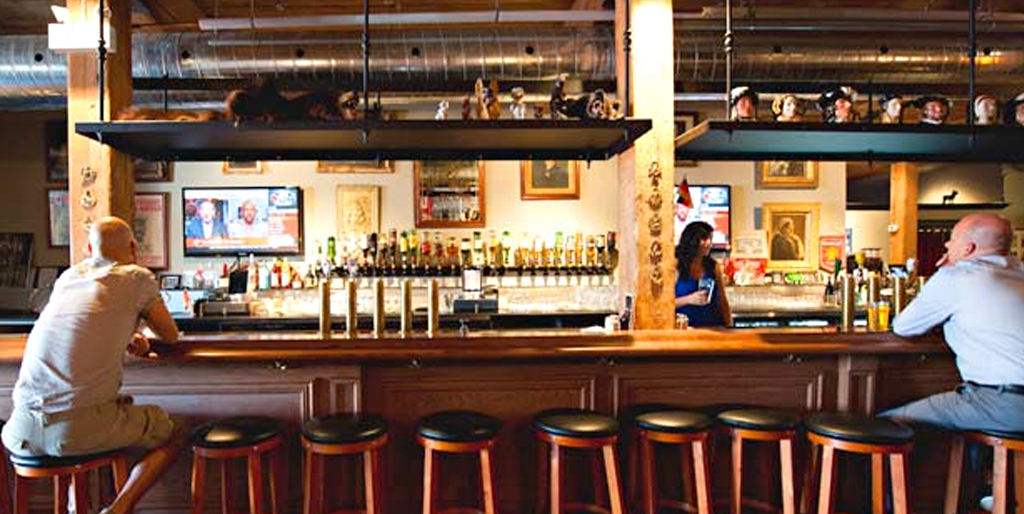 Opened just in time to cheer on England in the Euro Cup (on Monday, there were people lining up at 10 a.m. for a good seat to watch the England vs. France game), The Dog & Bear takes over the space that was once The Social, bringing Queen West a traditional British pub that aims to provide great food, good prices and good company. The idea is to give Toronto a fresh take on British food, not unlike the city’s newest slew of British-themed spots like The Oxley, The Bristol Yard and The Grove.

The Dog & Bear team includes Richard Lambert and Jesse Girard, of Parts & Labour, The Hoxton and The Social. The venue is an ode to Lambert’s own father’s old pub in the UK, also named the Dog & Bear.

Steven Fong redesigned the space, which now includes a 30-something foot bar, cozy booth seating and plenty of standing room for knocking back a pint with friends — just like in the old country.

Richie Smith, part of the Dog & Bear team, helped pick out the vintage knickknacks littered around the space, including photographs of Lord Gladstone and Lord Dufferin (an ode to the area), a 1903 “God Save the King” flag, portraits of kings behind the bar and Royal Doulton figurines of past royals.  Even the footer of the receipts says “God Save the King.”

In the kitchen is chef Andrew Eade (Splendido, Luma, Scaramouche, Auberge du Pommier), and, as expected, the menu is full of comfort British pub fare. To start, there’s a Welsh rarebit ($5.50), homemade Cornish pasty ($5), a ploughman’s board ($15) or English garden salad ($9).

For mains, there’s fish ‘n chips ($17), made with a Hoegaarden and Boddingtons beer batter and sustainable haddock from the East Coast, full English breakfast ($12), bangers ‘n’ mash ($12) and chicken curry ($15). To finish, there’s the seasonal summer trifle ($6) and a sticky toffee pudding ($6), to be served with custard.

There are 20 beers on tap and a good variety of British imports to come.