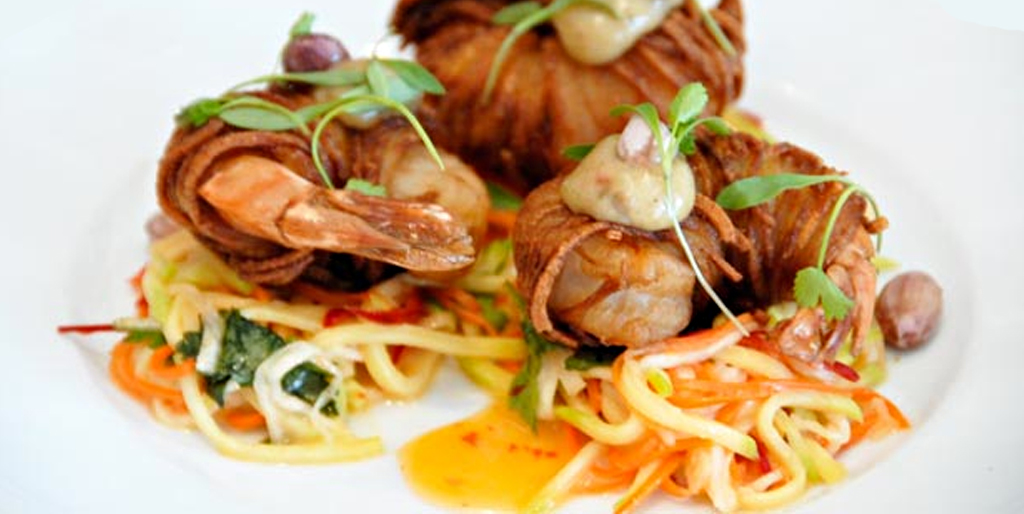 Chef Vittorio Colacitti has an unusually varied resume. He’s done fine dining (at George, Lucien and Didier); he’s done corporate gigs (he was a chef with Loblaws); he’s done pizza (at Pizzeria Via Mercanti and in Italy) and he’s done television (he was on season four of Top Chef Canada). Now he’s doing his own thing with The Good Son, his new restaurant on Queen West.

“It’s Toronto cuisine,” Colacitti says. “It focuses on balance. It’s seasonally driven and locally driven as much as possible.”

The Good Son takes over the space formerly occupied by Nyood, the erstwhile supper club, and it officially opened on June 11. The menu, which is designed for sharing, is split into four parts: cold, hot, wood (as in from the wood-fired oven) and pizza. Colacitti takes cues from many cultures: his potato-wrapped shrimp ($13) are seasoned with jerk spices and served with a Thai-inspired mango salad, while his steak tartare ($19) is a direct homage to the French cooking from Didier.

Pizzas ($15-$19) are a hybrid between Neapolitan-style and Roman-style, which means they’re slightly thicker and crispier than something you’d find at Pizzeria Libretto, and they’re cooked for a bit longer at a lower temperature.

The interior is plastered with antiques: old clocks line one wall, plates line another and mismatched chairs are scattered throughout. And yes, there is exposed brick, filament bulbs and reclaimed wood.

“We want to get away from that supper club feel,” Colacitti says. “This is just a restaurant.”

But it's a little bit more than that: at the entrance, there’s a pantry that sells imported grocery items (such as tea and olive oil), and upstairs, a sister venue to be known as Wayward prepares for its opening later this summer.