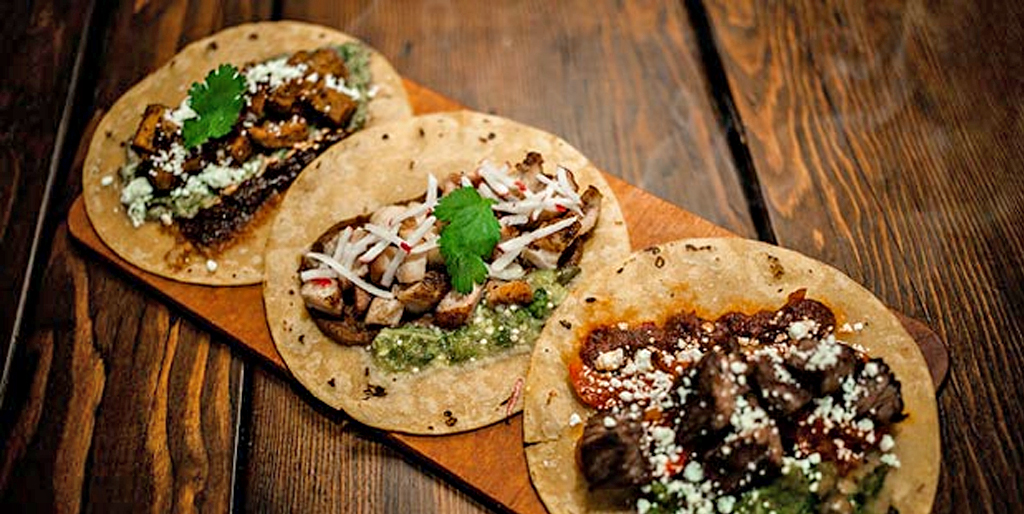 It takes a serious push to knock a successful sports bar off the track it was on for almost 25 years. But in February, the The Loose Moose responded to the popularity of craft beer and downtown condos by overhauling its menus, expanding its beer selection and updating its decor.

The big news is that with over 50 taps, The Moose now has the largest draught selection in downtown Toronto. The bigger news is that when General Manager Damon Kestle thoughtfully designed the new list, he saved around 20 spots for a rotating selection of craft beer. Starting this week, that means that harder-to-find gems like Sawdust City Ol’ Woody Alt and the Wellington Terrestrial India Brown Ale will be available. Of course, the beer selection still includes old standards such as MGD and Labatt 50.

If over four-and-a-half dozen taps seems like a lot to choose from, the 3-oz sample-size portions ($1.11-$1.33) might be a good place to start. Meanwhile, the bottle selection offers over 20 choices, including standouts like Péché Mortel from Dieu du Ciel!

Kestle ably parries two concerns about this expanded tap selection: the possibility that the beer will go stale and that the tap lines won’t get cleaned frequently enough. He says that The Loose Moose is within the top five Ontario restaurants in terms of beer consumption. Also, the turnover on the craft options has been even better than expected — to the point where a keg of Great Lakes Brewery’s Audrey Hopburn ran dry in less than a week (it has been replaced by the Pompous Ass English Pale Ale). He plans to add a new line-cleaning system in the near future; until then, the lines are cleaned every four weeks. The beer system is independently audited by Better Beer every month. 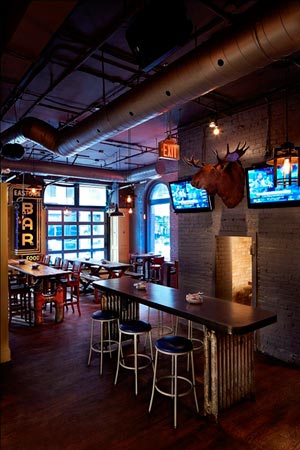 Chef Matt “Rosie” Rosen (previously of Four and Reds, both also owned by SIR Corp) has revamped the menu and has placed an emphasis on sharing plates (who hasn’t these days?).

The slider selection ($11.25 for four) offers pork belly, ahi tuna, meatball and cheeseburger options. The bigger plates include fried chicken ($14.50) or burgers ($10.95 to $14.25). In a nod to those looking to concentrate their calorie intake on the beer selection, chef also offers salads such as the Big Bitchin’ Green ($9.50); all salads can have a side of protein (chicken, seared tuna, flatiron steak or spiced shrimp skewers) added for $5 extra.

The kitchen focuses on making ingredients in-house, right down to the tortillas for the tacos ($8.95 for three).

Leafs fans who have come to count on getting their fix of white and blue will be happy to find over 20 screens spread between the Loose Moose and the Antler Room, the downstairs live music venue.

The decor has been otherwise updated with bare-filament lights, a kitschy collection of decorative objects (see the entire wall of rotary phones) and rough-hewn wooden wallboards.

By updating the menu and creating a beer selection that is both wide and deep, The Loose Moose is fundamentally more than just a sports bar. 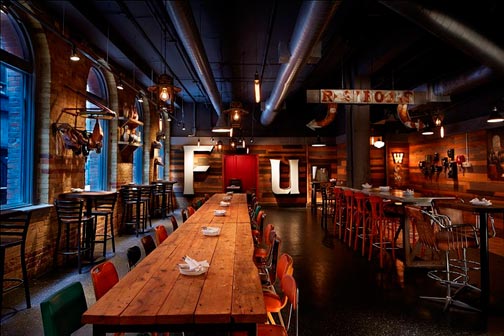