The Beach’s newest bakery, Tori’s Bakeshop, is all vegan, all natural, refined sugar-free, occasionally gluten-free, organic where possible and entirely eco-friendly. Owner Victoria Vaccher, a vegan herself, made sure of that.

Entering the welcoming green and white shop, patrons are greeted with the sound of a whirring espresso machine and a soundtrack of French music that sets the scene for a perfect pastry-tasting session.

Not only is Vaccher a whiz in the kitchen, she also designed the bakery — with a little help from Lisa Canning — which is full of charming touches: whimsical light fixtures made from industrial whisks (built by her dad) and the equally adorable mason jar light fixtures, ordered from Etsy.

A mint green Elektra espresso machine gives off a cool vintage vibe as it froths the soy, almond and coconut milk that tops off the eco-friendly coffee on offer. An unintentional (yet adorable) addition to the décor is a barista’s vivid green hair, which matches the whole aesthetic. 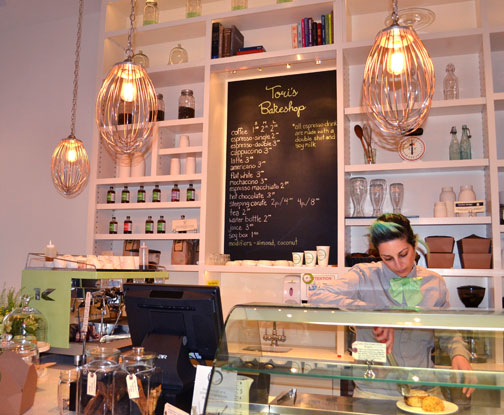 If the ambiance doesn’t draw you in, the promise of a variety of vegan treats will. A chewy chocolate chip cookie ($2) and a chocolate hazelnut biscotti ($1.50) pair nicely with the Merchants of Green Coffee. Fluffy, pull-apart cinnamon buns ($4.50) are so popular that the bakery has started making five days’ worth every day.

Vaccher is just getting started, but she’s already planning more: namely, vegan lunch items, a liquor licence (for wine) and something our inner Amélie is really excited about, crème brûlée.