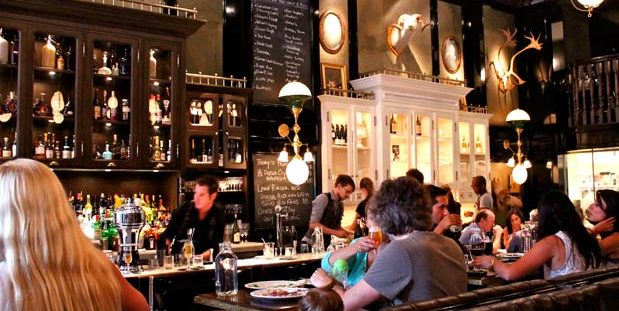 With its giant sunshine-yellow doors beckoning passersby, Weslodge Saloon, King Street West’s latest addition, is hard to miss. The project of nightlife mavericks Charles Khabouth and Hanif Harji, this brand new joint is already beyond bustling — and it’s just over a week old.

Dressed to the nines, thanks to designer Alessandro Munge, the polished space is a feast for the eyes. “It’s our interpretation of a modern saloon,” Harji says, “with the saloon being the first expression of the modern dining movement.”

The attention to detail segues into the tableware itself: antique glassware sets off the carefully crafted cocktails, while bills are presented in weathered receipt pads. With staff outfitted in leather gun holsters to boot, the overall atmosphere is a rich one — though, admittedly, we would’ve preferred it if the music had a little more saloon swagger.

Stuart Cameron (freshly plucked from Nyood) oversees a menu studded with gastropub fare. Starters include the fluke ceviche ($12) with yuzu and radish, which is drizzled with dill oil and set off with puffed tapioca ($12). Mains are meat-heavy, with a burger ($18) and the bison bavette ($24) offered up alongside picks like the bourbon-marinated Cornish hen ($21), starring chanterelles, black kale and corn.

Dessert is a real source of pride for Cameron. The so-called “instant cake” features a cylinder of chocolate mousse. Spray-painted with 80 per cent cocoa, the mousse is set off with olive oil pudding and dehydrated raspberry fragments ($7).

Judging from the scene last week, it looks like Khabouth and Harji could very well have hit another home run. And keep an eye out for their upcoming Spanish restaurant, Patria, set to open in September.