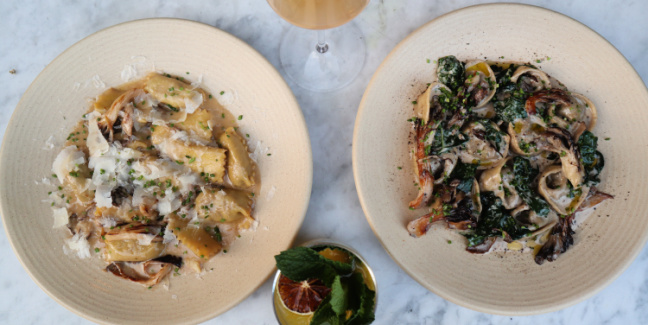 Gia, a reimagining of much-loved Dundas West restaurant Ufficio, brings to life the version of Ufficio that owner Jenny Coburn had originally envisioned. “When I first started Ufficio with my partner we were going to do it vegetarian,” says Coburn, “but this was five years ago.” At the time, Coburn says they weren’t sure Toronto would embrace a fully vegetarian restaurant, so they instead opted to create Ufficio’s beloved pescetarian menu to make the concept more approachable.

Downtime during the pandemic, however, created an opportunity to revisit this earlier idea for the restaurant. With the support of investment firm 5D Capital, Ufficio has been transformed into Gia, an Italian restaurant with a plant-forward menu. The cuisine and vibe of Gia isn’t a dramatic departure from Ufficio but its menu taps into the growing movement towards plant-based dining. “It’s more authentic to who were are as people,” says Coburn.

Gia’s plant-forward menu focuses on housemade pasta, as well as local and organic produce sourced from suppliers like 100km Foods and Clearwater Farm. 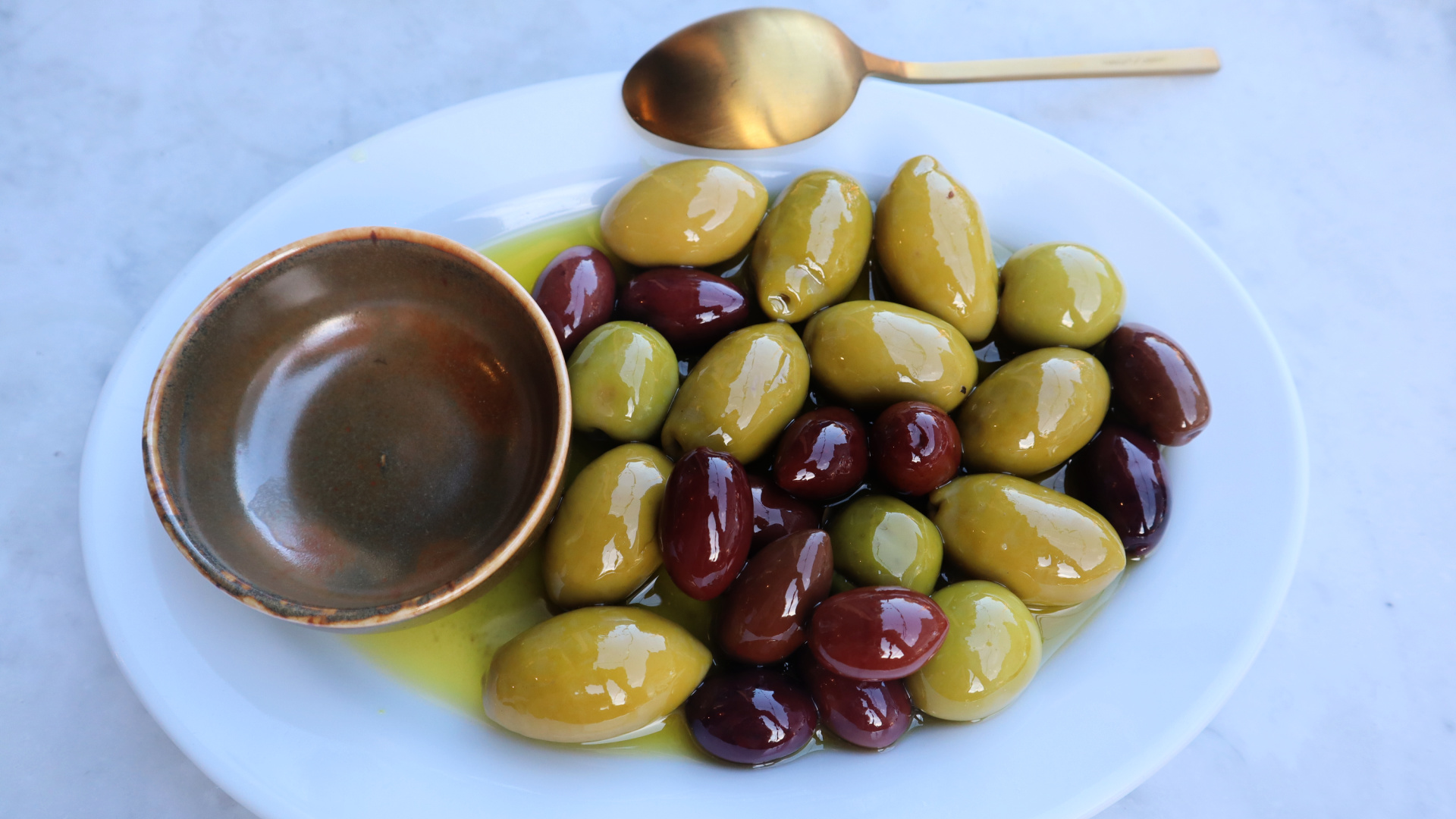 Succulent olives are marinated in citrus, garlic, onion and herbs. 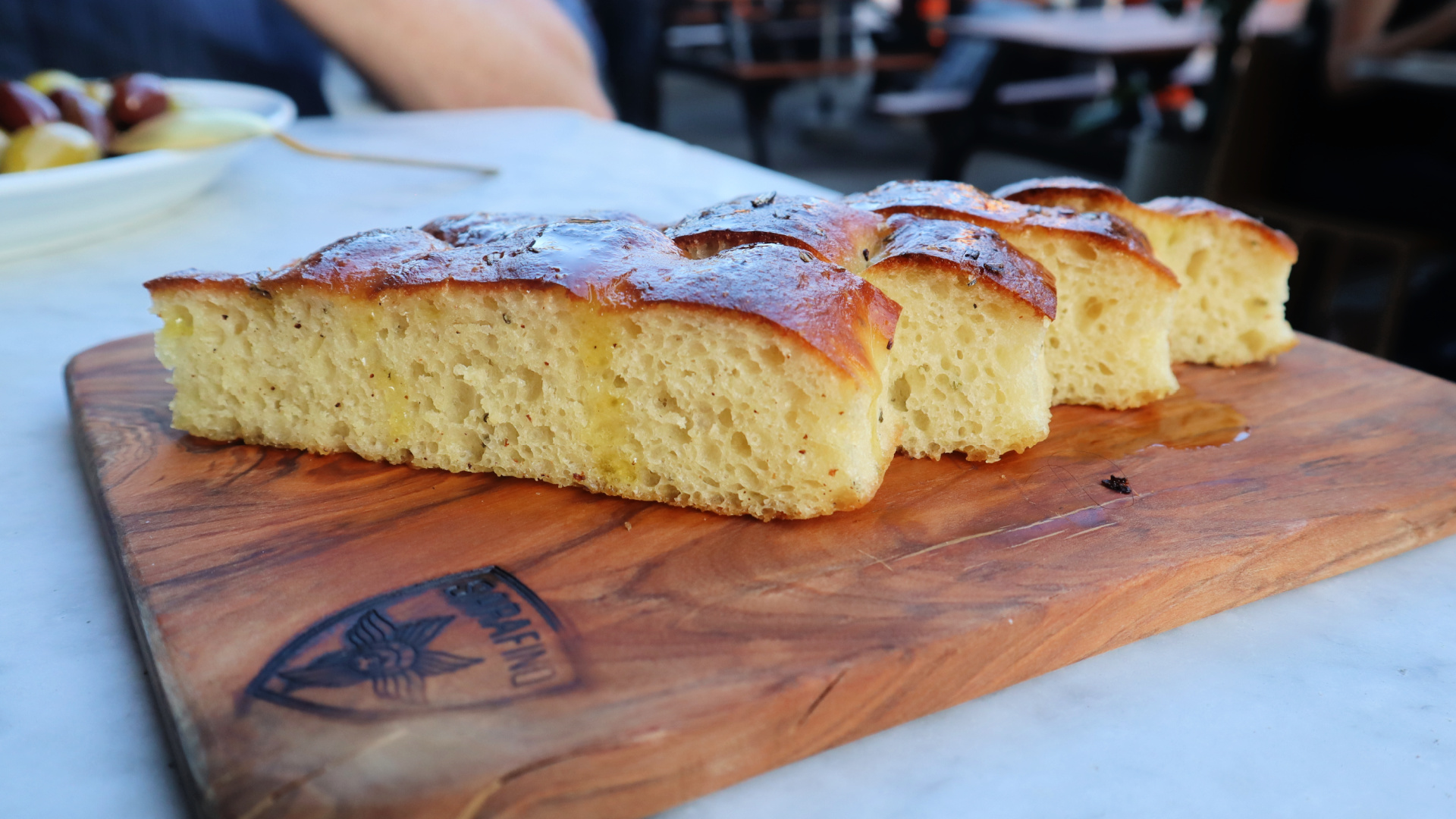 Buttery (but without the actual butter!) focaccia is finished with rosemary garlic oil. 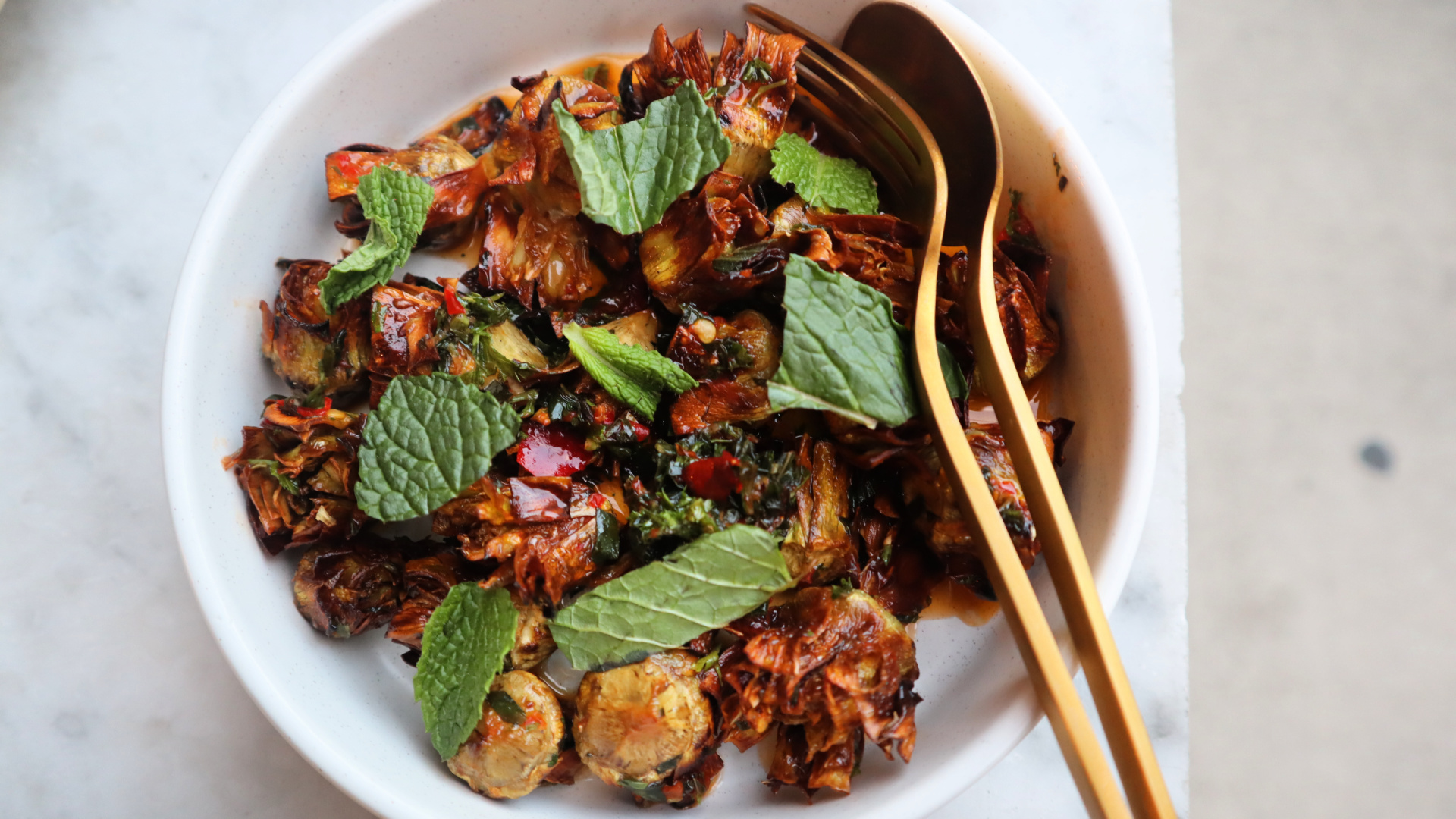 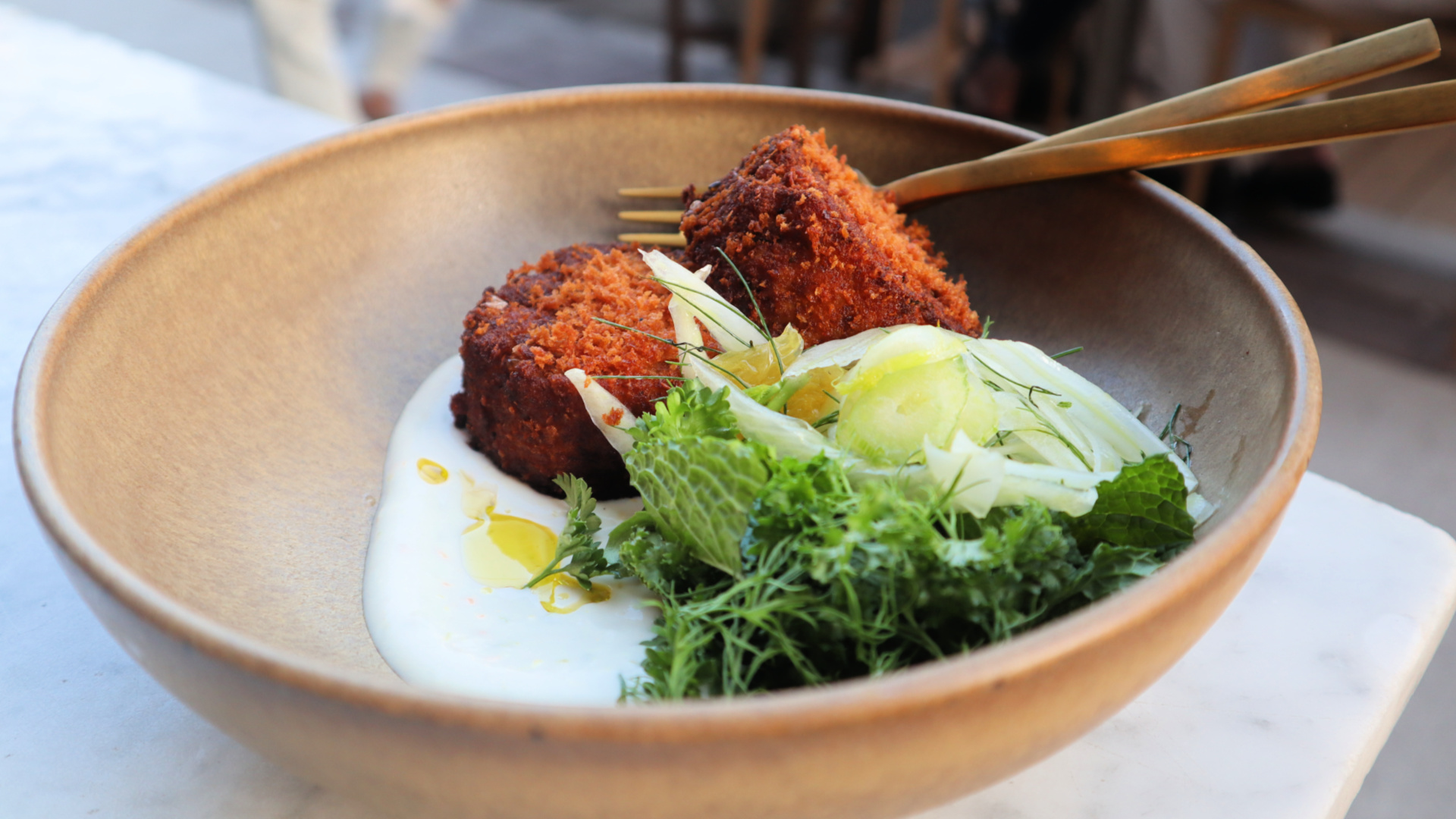 Vegan crab cakes made from okara and quinoa come with a dollop of citrus aioli and a zingy orange fennel salad. 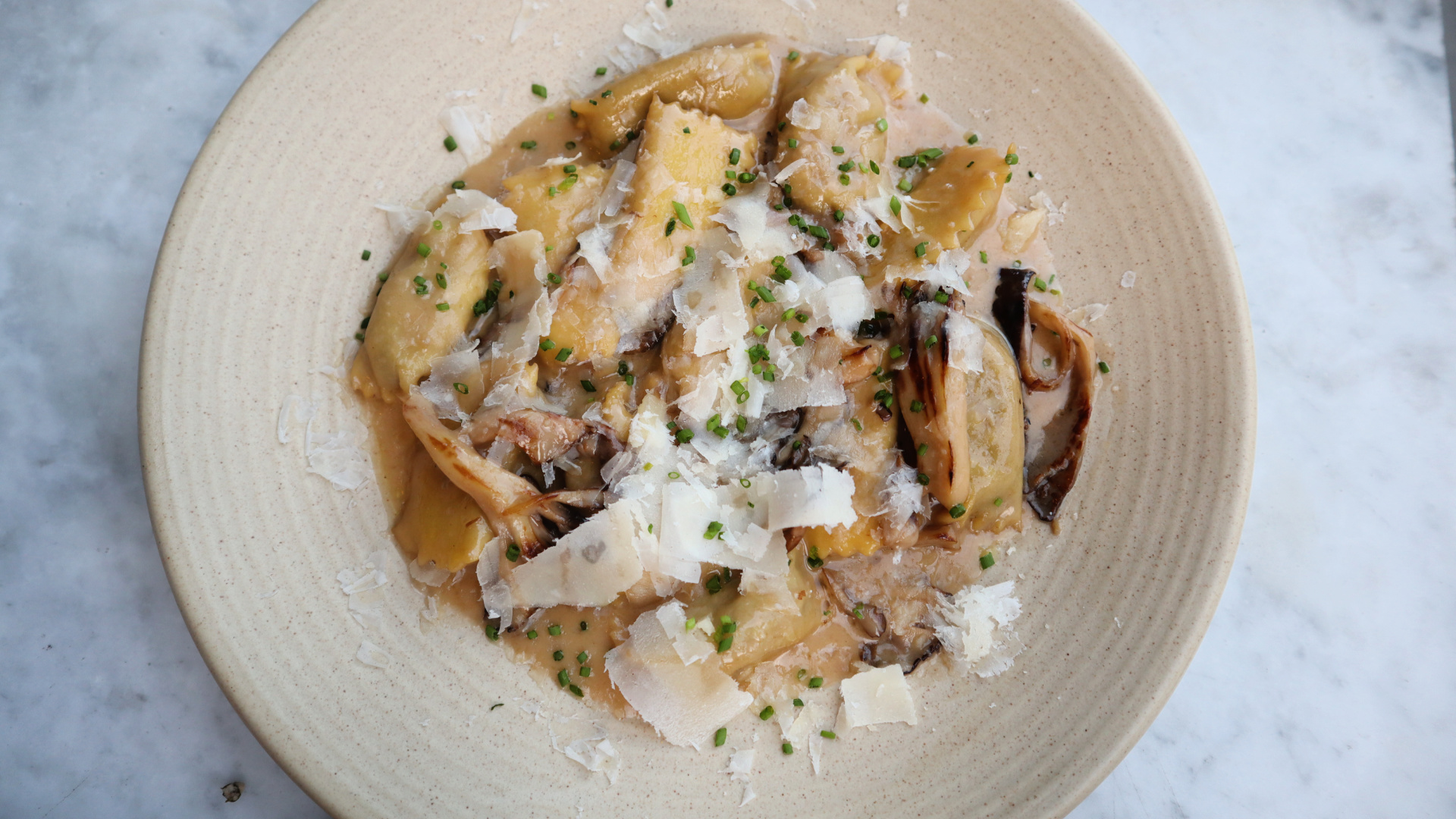 The porcini agnolotti is a fan-favourite carry-over from Ufficio that sees egg-based pasta filled with roasted porcini and shiitake mushrooms, doused in a creamy sauce of butter, Parmigiano-Reggiano and chives. 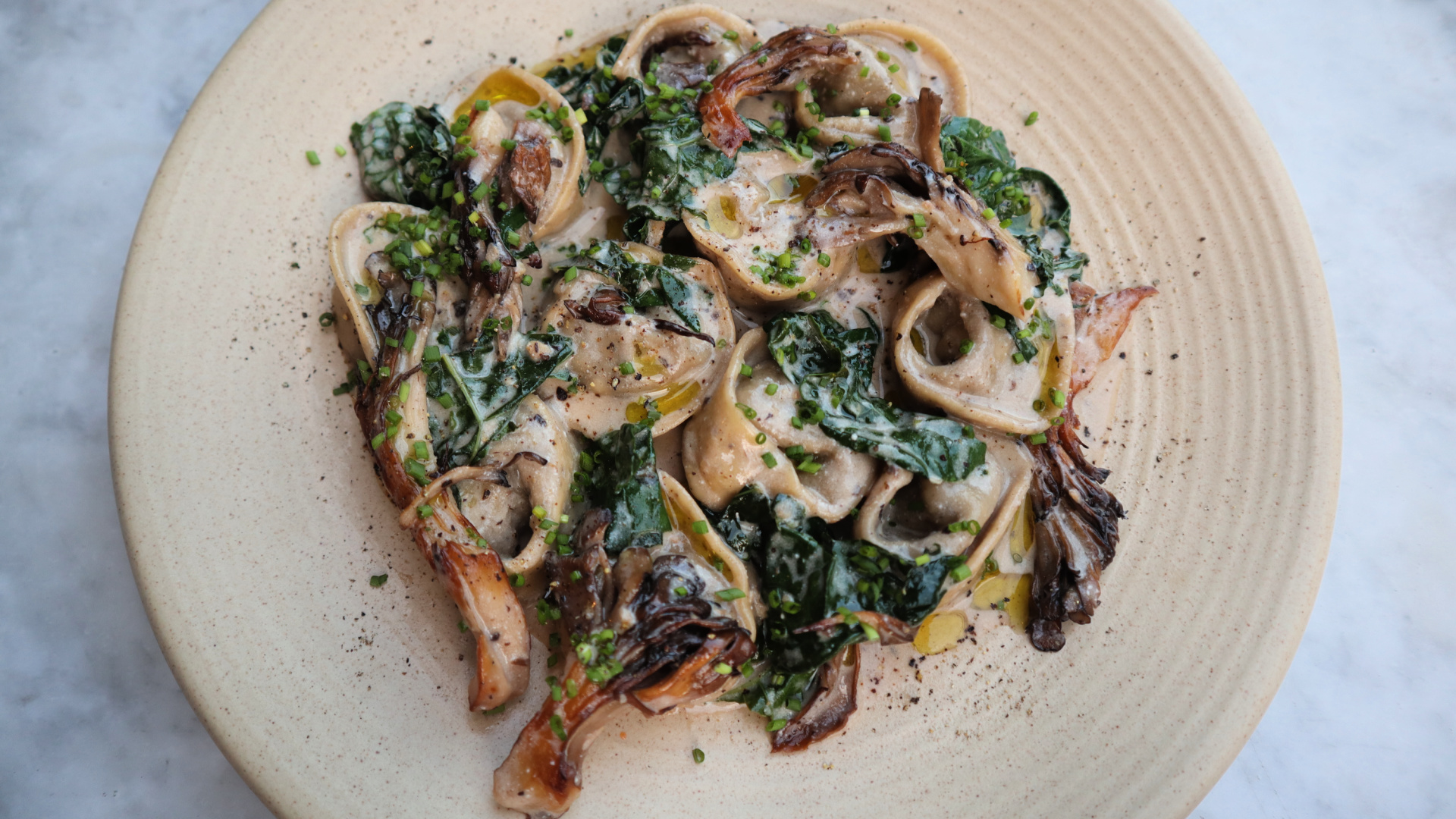 The porcini tortelli is a vegan reinterpretation of the classic agnolotti dish that features nut-based ricotta, truffle butter, wild mushrooms and Tuscan kale mixed with a semolina-based pasta. 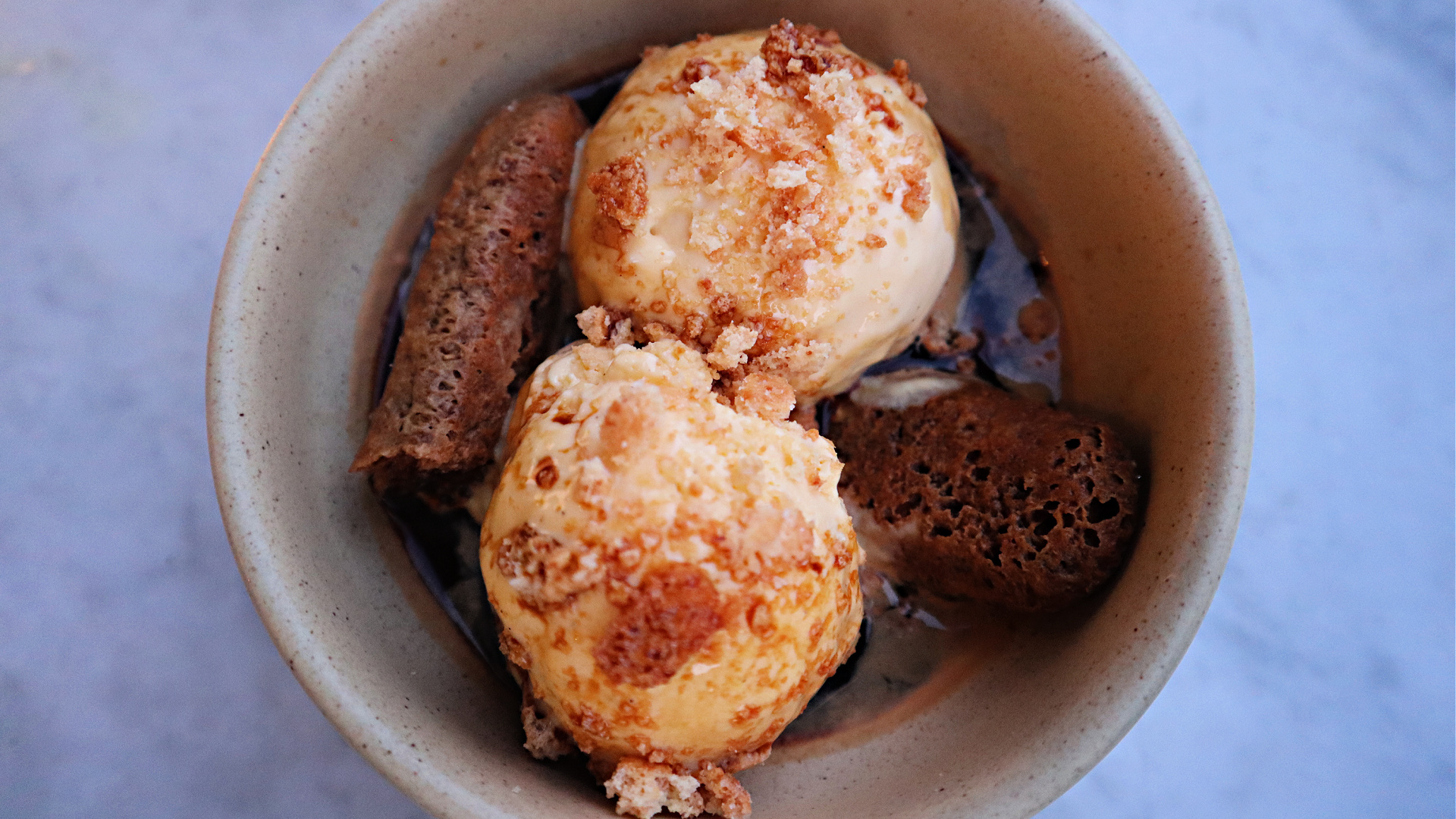 The affogatto al tiramisu is a perk-you-up dessert that sees rich, housemade mascarpone gelato crowed with amaretti cookies and a generous pour of espresso.

Gia has also relaunched its pandemic pivot concept, Stefano Sandwiches, with vegan sandwiches available for Sunday brunch. More new menu additions are in the works, including a dessert partnership with the New Pie Company, high-protein grain dishes and a line of cold-pressed juices. 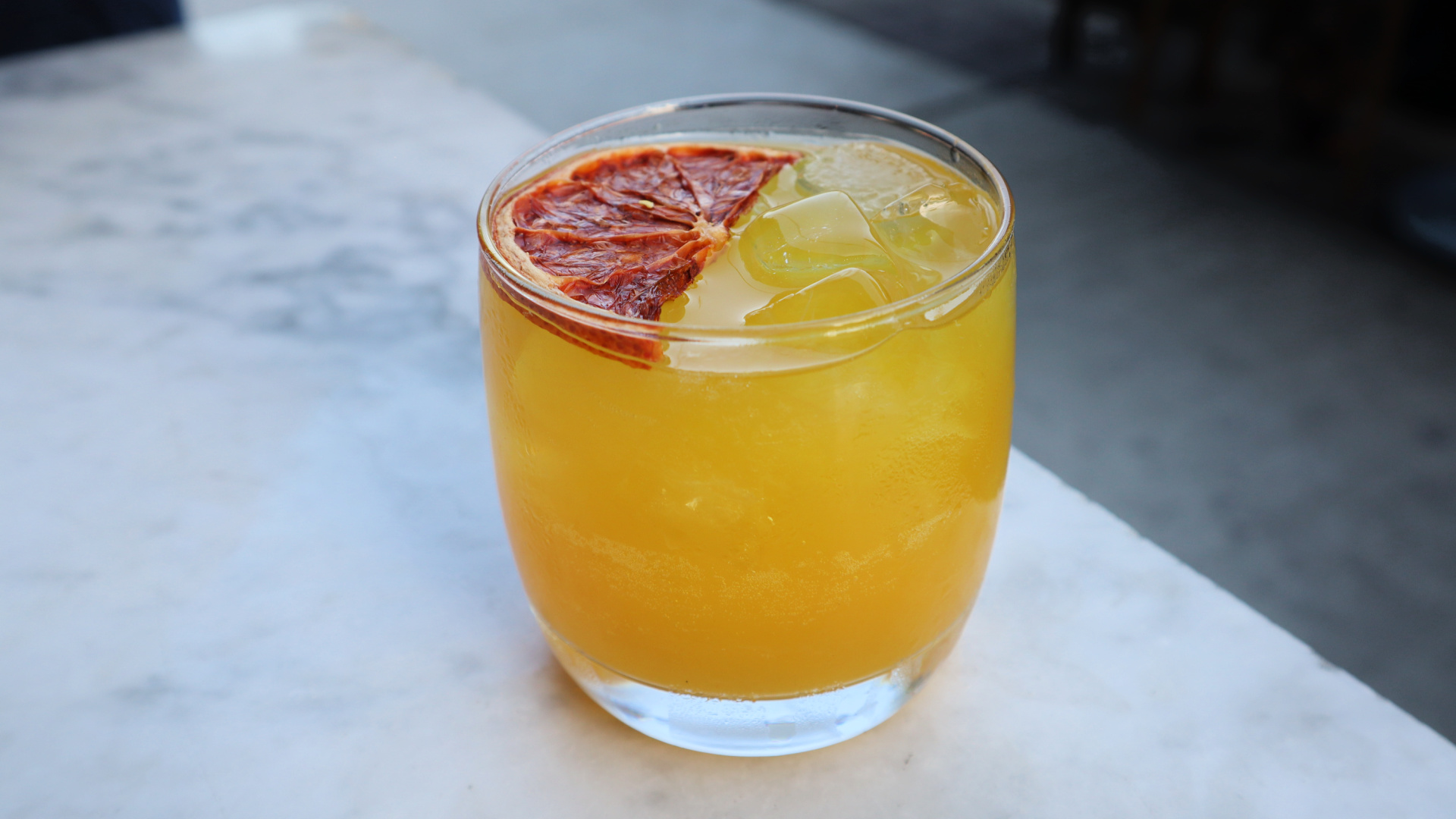 The La Famiglia, for example, is a riff on Penicillin cocktail featuring smoky mezcal, agave, fino, Lillet and a chilli tincture. Ginger and turmeric add a burst of tangy, better-for-you flavour. 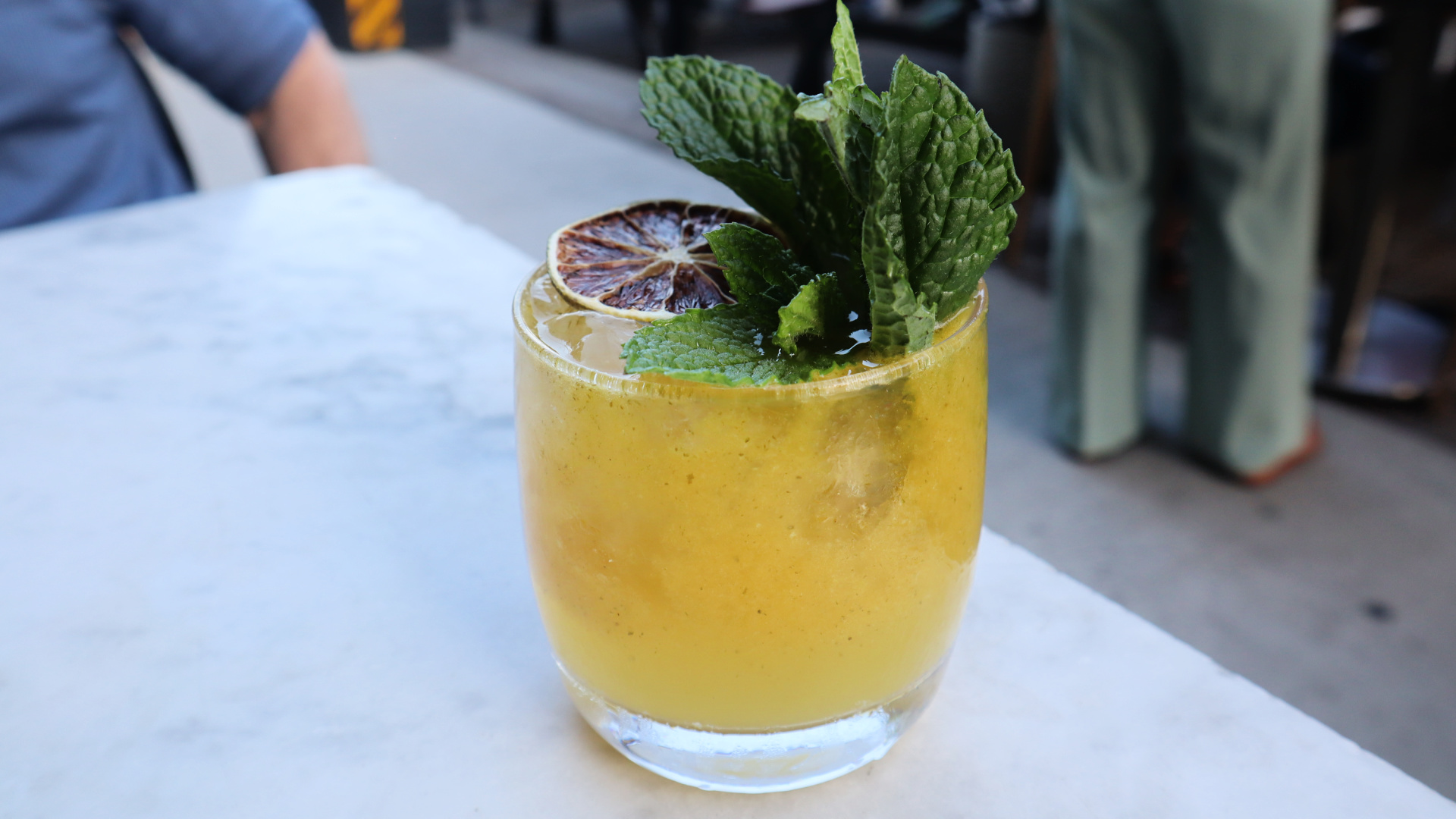 The Fluent Padre is a spin on a Caipirinha cocktail that uses Leblon Cachaca as its spirit base. Cachaca is a Brazilian spirit made from fermented sugarcane juice. “You don't get the same sweetness as you do with a traditional rum, which is usually made with fermented molasses,” says Harbury. “You get grassy notes, something funky.” 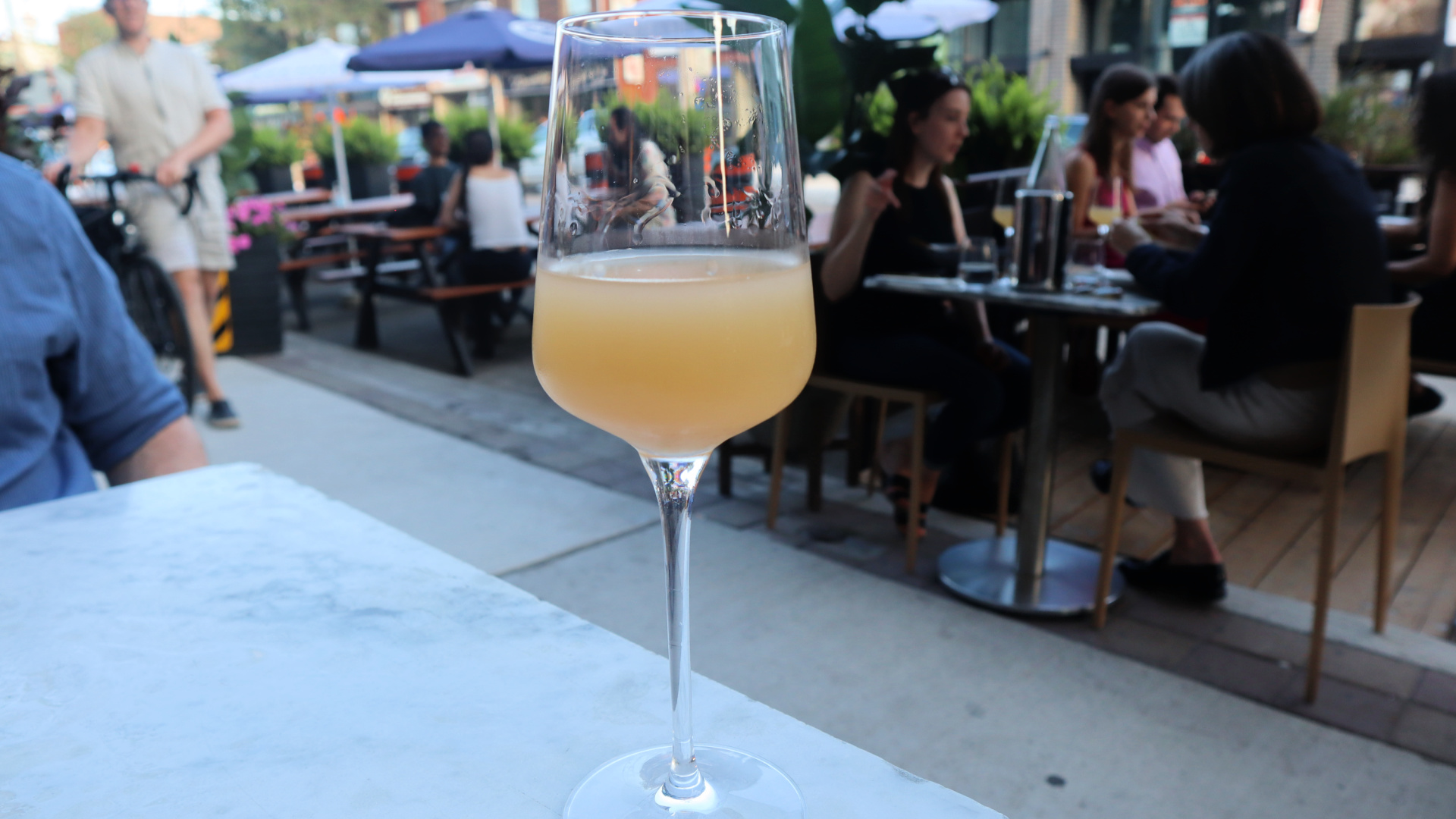 Curated by sommelier Matthew DeGasperis, the wine list offers mainly Italian bottles with an emphasis on organic, biodynamic and skin contact wines, such as this Poderi Cellario e Orange from Piedmont.

Gia takes over the former Ufficio space, offering seats for 32 inside and 30 more outside on an elegant CafeTO patio that stretches along Dundas West. Aside from a subtle refresh of the bar area, little about Ufficio’s bright, modern aesthetic has been altered but Coburn says a more extensive interior redesign is in the works. “We’re big on vibe in this restaurant,” she says of the relaxed yet sophisticated space. 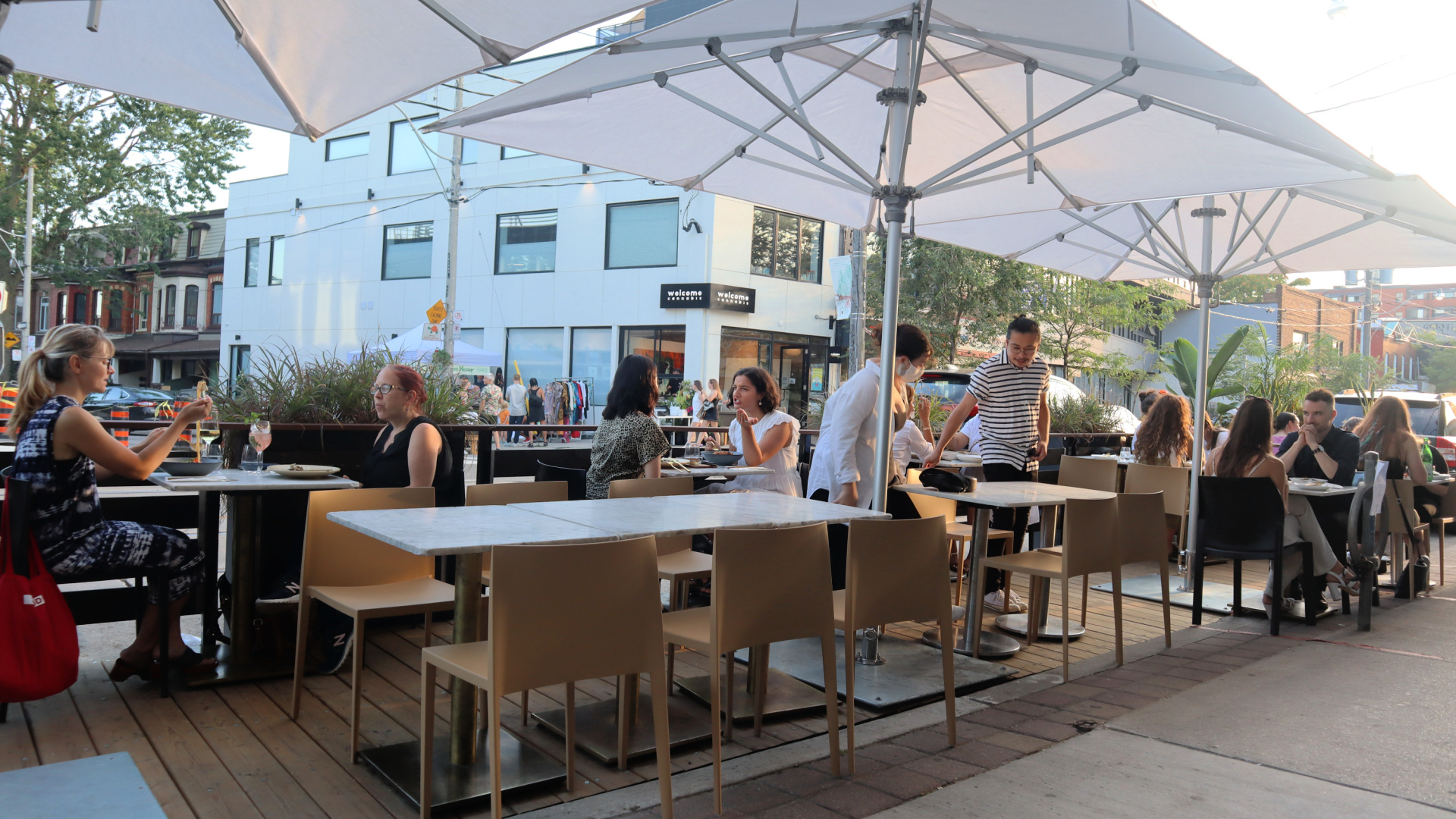 “We want this place to be: Just as you would have taco night, you might have vegan night. You can come and have vegan and vegetarian food and not have it be this departure,” says Coburn. “Once people understand that it can be just as good, I think it'll be way more normal to go to a vegan restaurant if you're not vegan.”