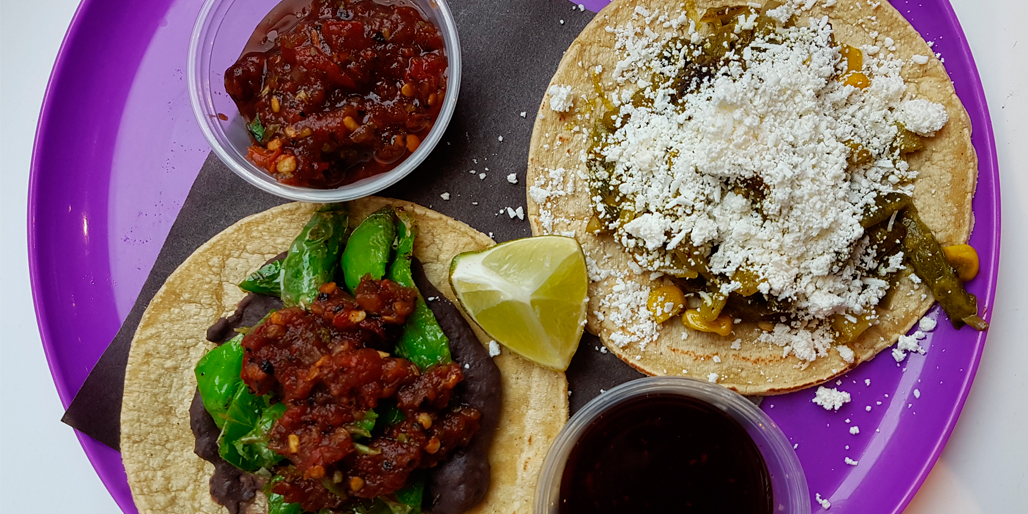 Good Hombres, the "little brother" taqueria and torilleria from the team behind Campechano Taqueria is now open at Bathurst and Dundas, in the former Starbucks space across from Toronto Western Hospital.

The new spot is a hybrid production facility, where a Mexico-imported machine cranks out tortillas, which Good Hombres produces for both its own restaurants and others in Toronto.

Those looking to host legit taco parties can also purchase tortillas by pound, though Daniel Roe-Cortes, one of the owners, suggests that tortillas are really meant to be eaten fresh and shouldn’t be kept any longer than one to two days in the fridge. Still, there is a way to “salvage” them if they sit longer than the suggested time — nachos anyone?

Luis Guerra putting the finishing touches on some tacos

On the other side of the space is the taqueria, where Luis Guerra, Marliy Salinas and Benito Yado dish out a short menu of tacos, all priced at $3.75 a piece. The opening roster includes handhelds of the Carne Asada, Tinga de Pollo and Pescado variety which will be familiar to lovers of Mexican cuisine. The Chuleta Ahumada is a taco of smoked and grilled pork chop and salsa macha de guajillo (like a spicy chili oil). With a flat top grill, Guerra is also dishing up a Costillitas de Res, an Arbol and Morita-braised short rib with avocado puree and salsa roja.

Good Hombres is still awaiting their liquor license and will likely offer up a list of Mexican beers.

“In most taco joints in Mexico, you don’t really see cocktails, it’s mostly beer,” says Guerra. For now you can get cans of Jumex in all the usual flavours from Guava to Pineapple.

The space features a “taco bar” with a few bar stools where you can watch as your food goes from kitchen to table. Black and white photos of Mexican street vendors and cityscapes adorn the walls.

Delivery is in the works, but since “tacos don’t really travel well” the team will put together a sort of DIY-taco kit where all the components will be packed separately so that you can assemble and enjoy at its best.

Good Hombres is open from Tuesday to Saturday between 11:30AM - 9PM at 374 Bathurst St.