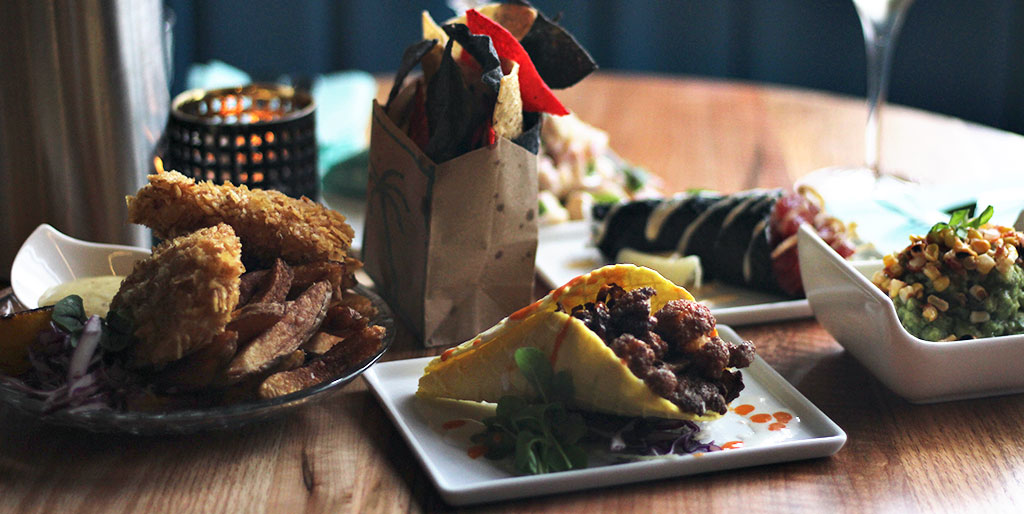 The latest destination to hit the buzzy intersection of Gerrard and Jones in Toronto's east end is Hotel Delilah — a tropical themed restaurant and future Airbnb inspired by the beaches of Costa Rica.

The restaurant and hotel concept is designed to conjure feelings of the tropics, with curved wood-panelled walls, tiled floors, and snake plants tucked away behind deep blue vinyl banquettes. Sunlight streams in through the large window at the front of the restaurant, casting its glow on a large mural by Valmor Garcia (an interpretation of the biblical Delilah). The back bar is a little more pared down and intimate, with slate bar-top tables and industrial-style custom stools offsetting cabana-like turquoise accents.

Hotel Delilah was founded by Ryan Boudah, Marcus Monteiro, Damon Snider and Joshua Seaton, whose backgrounds range from nightlife to design. Snider, who designs and builds restaurants, previously worked with the Food Dudes on OMAW and RASA, and Monteiro is a partner of Melrose on Adelaide and previously worked as executive chef at Brasaii. Seaton and Boudah were the owners of Nightowl and the beloved bar and venue Brooklynn in Parkdale before opening Hotel Delilah.

Hotel Delilah is this team’s first foray into hospitality. The plan is to create a full dining and overnight experience, with a two-bedroom unit upstairs and the opportunity for guests to rent out the restaurant and bar for special events. (When asked about whether the team were concerned about the city setting more stringent regulations on Airbnb, Seaton shrugs, “Not really”).

The menu, too, is designed with escapism in mind, eschewing meat but offering seafaring delights, ranging from oysters, seafood rolls of many kinds, and fresh bowls.

“Basically, we live in Toronto, and 10 months of the year, it’s not nice to go out,” says Monteiro. “We try to push the vibes of vacation and the tropics into this space. We don’t want to go for dungeony or dark, we’d rather go for light and bright and colourful and give you more of a warm feeling rather than a hidden feeling.”

The menu is broken up into three parts, assertively titled Munchies, Roll One Up, and Pack A Bowl (while there are no concrete plans to get into the cannabis market for now, co-owner Josh Seaton says that they’re toying with the idea of throwing community events and workshops in their upstairs space related to cannabis).

Munchies refers to smaller shareable bites. This menu is virtually all vegetarian or vegan and mostly gluten free — the only items that aren’t are their east coast oysters ($18 - $36) ,and their delectably snackable and portable Salt and Vinegar Miss Vickies’-encrusted fish and chips ($14.50), served alongside a malt aioli.

Their Roll One Up category is further broken into sushi rolls, taco rolls (made with tortillas) and waffle rolls. While some of the sauces make these seemingly handheld treats a little complicated to eat, the snack-sized rolls are vibrant, fresh and whimsical.

For example, Hotel Delilah’s take on the classic lobster waffle roll ($9) features a traditional filling of chunks of lobster, lime crema and celery, topped with baby sorrel, but stuffed into a sweet, seafoam green-hued waffle cone, brighten up the decadent and creamy chunks of lobster.

The tropicality is infused in many levels of Hotel Delilah’s offerings, from fresh tuna rolls ($8) packed with seaweed, pickled ginger and avocado, to the east coast oysters served alongside a coconut water mignonette sauce.

“The whole point of it is to stretch your culinary experience to go with your cocktail experience,” says Monteiro. “Rather than one big dinner with a glass of red wine, where all of a sudden you’re tired and you want to go home and sleep, we want you to pick at things slowly and have more conversation and add more community to the whole thing. And you can only do that if the food is light.”

The menu is largely influenced by the time Monteiro spent in Costa Rica and the Dominican Republic, Nicaragua and Bali. All the seafood is Ocean Wise-certified, with sustainability in mind, and Hotel Delilah have partnered with 100km Foods to ensure that their produce and other ingredients have been sourced within 100 kilometres of the city.

“We try to make it a seamless energy where you respond to the food and the energy and vibrations that you get here,” says Monteiro.

The menu will change according to seasonality (Monteiro envisions it changing every six months or so), while certain items, like the oysters and the vegetables in their Gnocchi Stir Fry will continue to keep up with what’s available.

The cocktail menu ranges from $12 to $14. The tight specialty cocktails list keep things light and frothy, favouring citrus, ginger and coconut over intense bitters, and swapping out traditional egg white for aqua faba, a light foam whipped up from chickpea water. The Honey Bee ($14) is as sweet as its name implies and made with Aquamiel Tequila, agave syrup, lemon juice, aqua faba and bitters.

In the long-term, they hope to buy up or take up tenancy in the units above other bars and restaurants dotting this rapidly gentrifying neighbourhood (other hotspots in the area include the Vatican Gift Shop and Pinkerton) and turning it into a full-scale Airbnb or hotel operation. But until then, the restaurant will simply remain a neighbourhood destination, serving up fun snacks and drinks with a side of tropical whimsy.