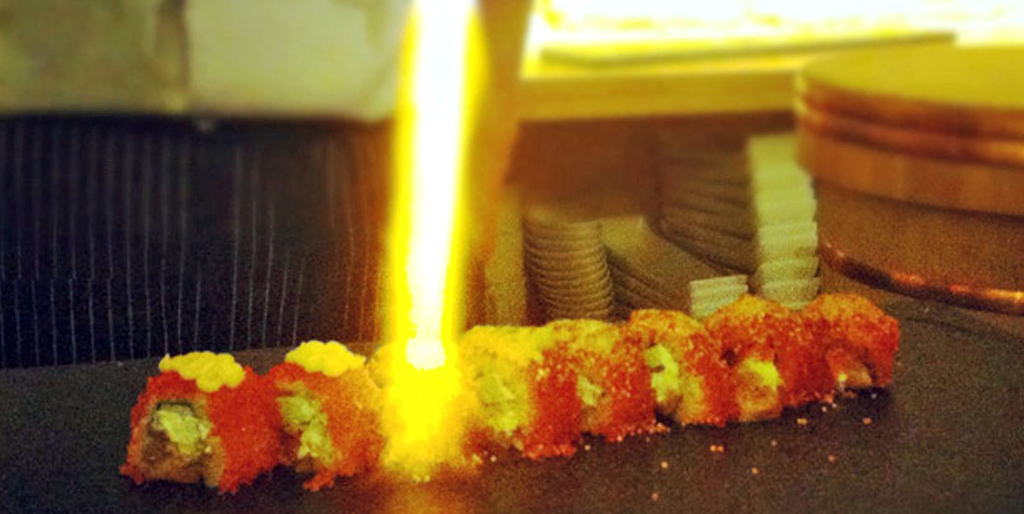 Koji Tashiro, the head chef of JaBistro, the new modern Japanese restaurant at Richmond and Simcoe, does more than make food. Watching him cook is like watching a performance.

Working behind the counter, Tashiro quickly, skillfully slices fish and then grabs steamed rice from a traditional bamboo container. He’s making oshizushi, a sushi that’s pressed into rectangles. He puts the fish and rice into a special white mould, then reveals perfectly shaped pieces.

Then he takes out his blowtorch. This style of sushi — which features prominently on JaBistro’s menu — is known as aburi. The blowtorch adds just a hint of char. Watching the process is absolutely engrossing.

“In Japan, people like authenticity,” says Tashiro. “This is Canada, so I get to do this.”

Tashiro has a long history with sushi. His resume includes Tokyo’s Tsukiji Fish Market — one of the biggest fish markets in the world — as well as Guu SakaBar (JaBistro’s owner, James Hyunsoo Kim, is the man behind Toronto’s Guu locations).

The JaBistroll ($22) is a blowtorched roll of tobiko (flying fish roe), uni (sea urchin), salmon and B.C. snow crab. The topping is a secret sauce, which Tashiro says many people find similar to hollandaise.

Another choice is the aburi ($27), featuring seven pieces of blowtorched sushi. Fish selections could include B.C. salmon, New Zealand sea bream and bluefin tuna, depending on what’s available.

Nearly everything is made in house: wasabi is grated fresh, and the soy sauce is made with fish broth, which adds extra (non-fishy) flavour to the sauce. Bae tells us that lemon and salt are also excellent with sushi.

“All the sushi is seasoned the perfect way, so you don’t need to season it — that’s Tashiro’s job,” Bae says.

Suppliers, and fish, vary according to season. Tashiro searches for the freshest fish he can find. He gets some items, such as sea urchin, from B.C., but other fish is sourced from Nova Scotia, Boston or even Japan. JaBistro’s menu will reflect the seasonal nature of seafood.

JaBistro is comfortably decorated; it’s a small space that’s roomy enough to be restful, yet sleek enough to feel exciting. The idea is for a hideout that customers can seek out after slogging at work all day.

“JaBistro is an oasis for Torontonians who live in the big city. A place to come and enjoy good food and drinks,” Bae says.