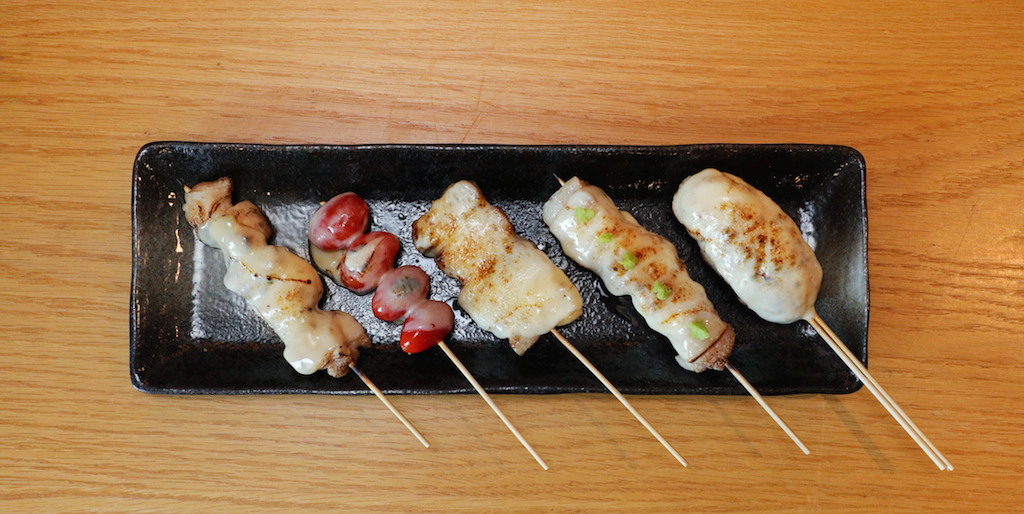 Hidden up and away from bustling Bloor Street West is Kintori Yakitori. This dimly lit restaurant is positioned atop one of the Kinka Family’s 10 Kinton Ramen locations in the GTA and is the first yakitori concept from the Japanese restaurant group. When you walk up the stairs you’re immediately met with aromas of charcoal barbecue and an eruption of Japanese greetings from their welcoming staff.

“Ramen and izakaya are very Japanese local. Ramen is Japanese soul food and izakaya are pubs for us, yakitori is kind of in between,” says assistant marketing manager Yutaka Tokuda. Open from 6 p.m. until 2 a.m., the concept was developed from traditional Japanese yakitori which are usually cosier spots designed for a crowd who has been out all night and in need of a pick-me-up and a hot plate of food. The small, yet well crafted menu is full of various skewer sets, small plates and late night specials that make for the perfect midnight snack.

Yakitori, which translates to a Japanese dish of chicken pieces grilled on a skewer, is the starting point for this fusion menu. With an array of skewer sets or moriawase, the menu was built with influences from not only traditional yakitori, but also the diversity infused in our city’s cuisine. Toronto has influenced the cheesier moriawase, while others are noted as "for the fearless." Here, Torontonians are encouraged to try grilled chicken innards, something commonly found in zero-waste restaurants in Japan. With a late night menu, a collection of boozy cocktails and a myriad of specials, there is something on the menu for the adventurous, the cautious and everyone in between.

The Don’t Be Cheesy, inspired by Toronto’s love for everything cheese, is a set of five skewers (chicken, pork and vegetable) coated in a layer of melted cheese and grilled to perfection ($15).

The Kintori classics are the largest moriawase with eight skewers in total, including the most popular Japanese yakitori, the tsukune or chicken meatball ($22).

The Kintori don is a spin on the traditional donburi, made with a soft-boiled egg, chicken and pork chashu on a bed of rice ($15.50).

To make sure this spot was in line with true yakitori culture, Tokuda created a booze-fuelled cocktail list full of Japanese-inspired drinks. The extensive cocktail list was also inspired by the Kinka crew in Japan who developed a couple cocktails of their own. “Izakaya tends to have more mixed drinks which are a little lighter in alcohol content, but if you’re out for a beer and come in here and want some boozier options that’s what we focus on,” says Tokuda.

Matcha No. 7 is a green tea cocktail with Jack Daniels, triple sec, simple syrup and matcha shaken over ice ($9.50).

The Sansho tonic was created by the Kinka Japan crew and is infused with sansho peppercorns, which numb your tongue and add a peppery kick ($7.50).

The sake caesar is Kintori Yakitori’s take on Toronto’s favourite savoury cocktail. Swapping vodka for sake and spicing things up with Sriracha, this is what we call fusion ($8.50).

Similar to the other Kinka Family locations, this spot is built from mostly wood and stone interiors, akin to yakitori found in Japan. This space was also designed to be more intimate than the Kinka Family's other locations. “Because this place is open late night we wanted to keep it a little more cosy. We still wanted to keep that energy of Kinka Izakaya and Kinton Ramen but not to the hype that we have at the izakayas,” said Tokuda. The exposed kitchen adds to the drama of the space and the small dimmed booths are perfect for gathering with friends and relaxing at the end of a long night.