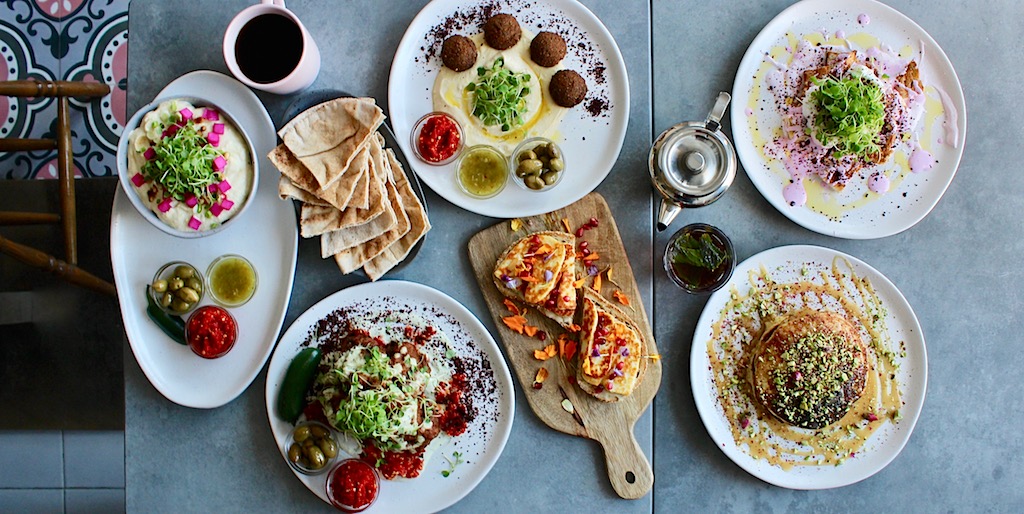 Chef Himi Hunaidi has been cooking up her concept for modern Levantine eats for years now, and after studying in the south of France, running a farm-to-stroller cooking class in Los Angeles, and catering events in Toronto, her restaurant Madame Levant has opened in Leslieville.

Each menu item is tied to a piece of Hunaidi’s heart, and with several generations supporting her vision, Madame Levant is a family affair. Her father is one of her biggest fans, and Hunaidi oscillates between laughter and a few affectionate tears when describing their countless rounds of research, cooking, and taste-testing. The olive oil comes straight from their family farm in Jordan, gluten-free mains abound so celiacs like Hunaidi’s husband never have to sacrifice taste, and a kid’s menu featuring $4-$6 mini-meals honours their two young daughters who’ve taste-tested each item.

Hunaidi has also crafted a tight-knit community in just under two years of living in Leslieville. Neighbours began to request her Levantine creations to the point where she was cooking weekly dishes for an ever-growing list of excited patrons.

“The group just kept getting bigger and bigger,” recounts Hunaidi. “It taught me that Canadians aren’t afraid to try things. I decided then that I’m not going to be shy about it anymore. I’m going to cook my cuisine, and I’m going to do it here.” 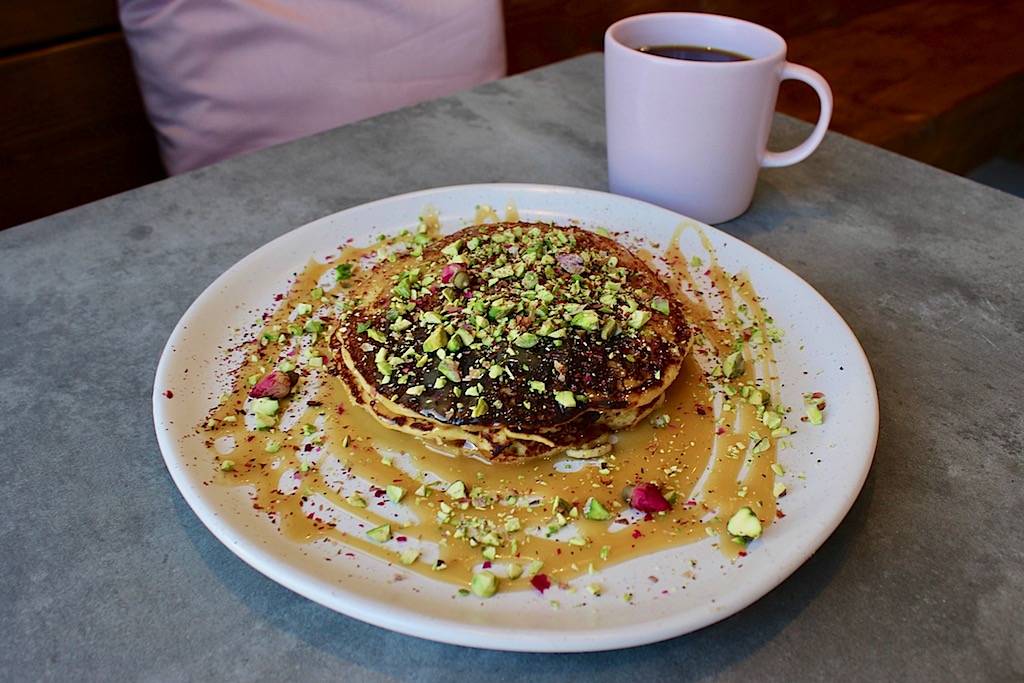 The halawa pancakes ($14) are fluffy, gluten-free and downright scrumptious. Maple syrup is infused with tahini and orange blossom to create a delicate and utterly addictive sweetness. The stack is finished off with ground pistachios and dried ward (roses). 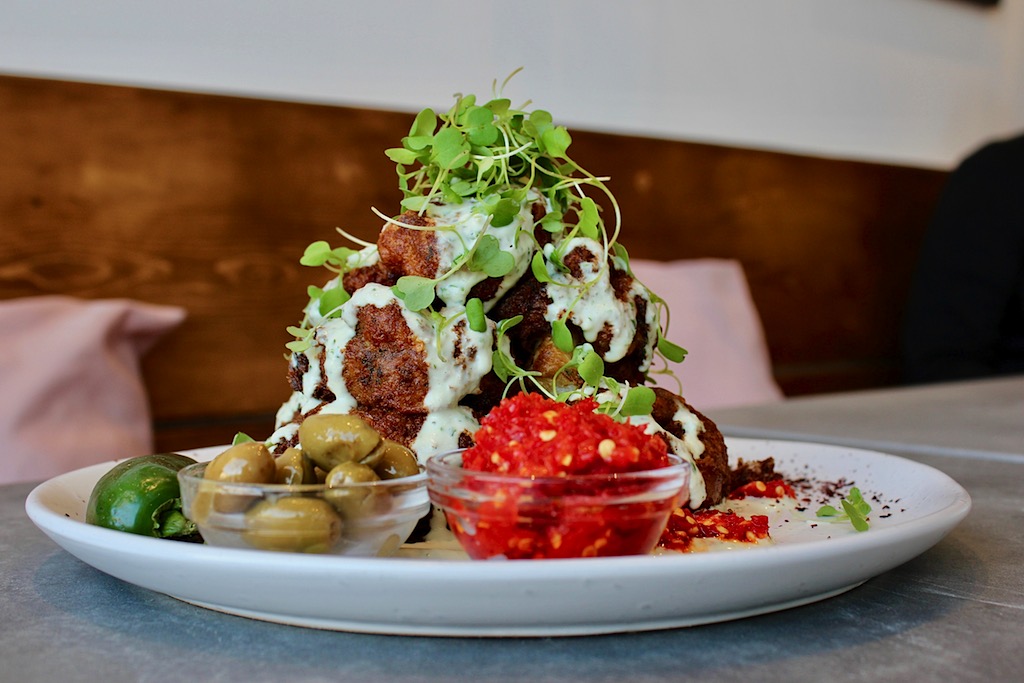 Hunaidi visited her 87-year-old aunt in Jordan to learn how to perfect this lesser-known Levantine favourite, m'shaut fritters ($14.50). Cauliflower, parsley, onions, garlic and in-house spices are fried up and served with tahini sauce and shutta (chili pepper paste made in house). You won’t believe it once you taste them, but yes, these are also 100 per cent gluten-free. 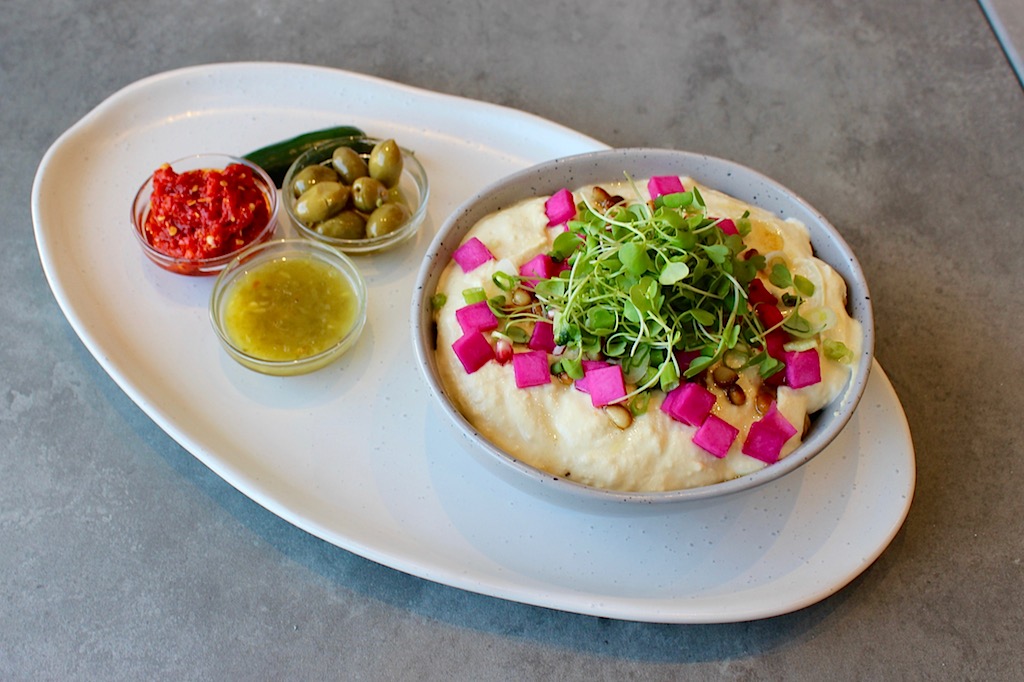 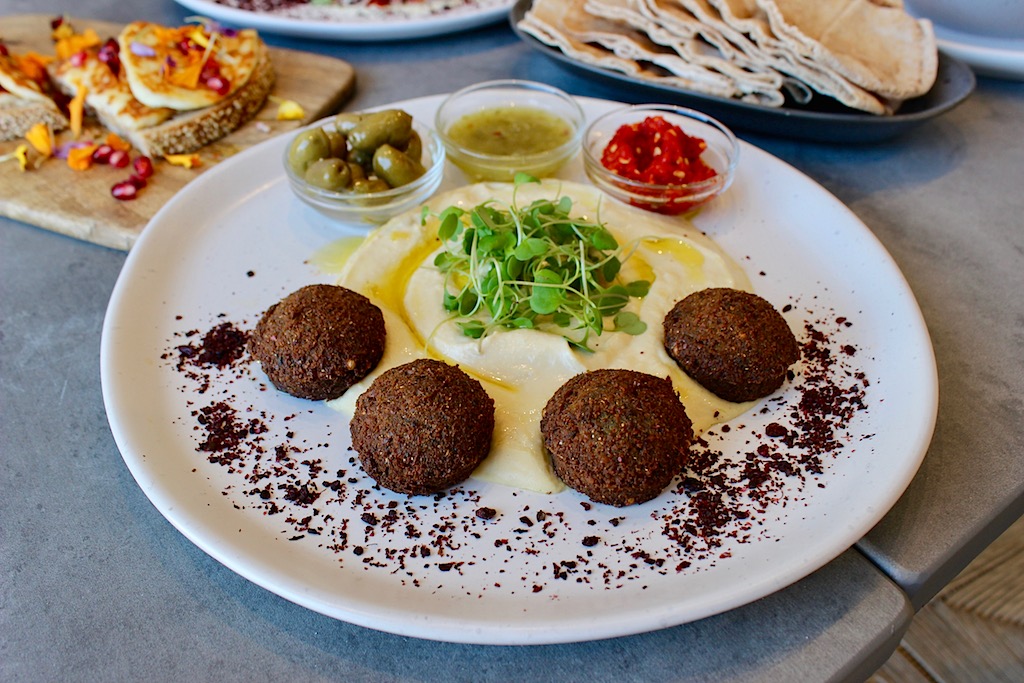 Madame Levant's hummus and falafel plate ($12) brings two of Toronto’s favourite snacks together on one platter. Creamy hummus is served with house-made falafel that uses a secret Jordanian spice blend of Hunaidi’s own making. 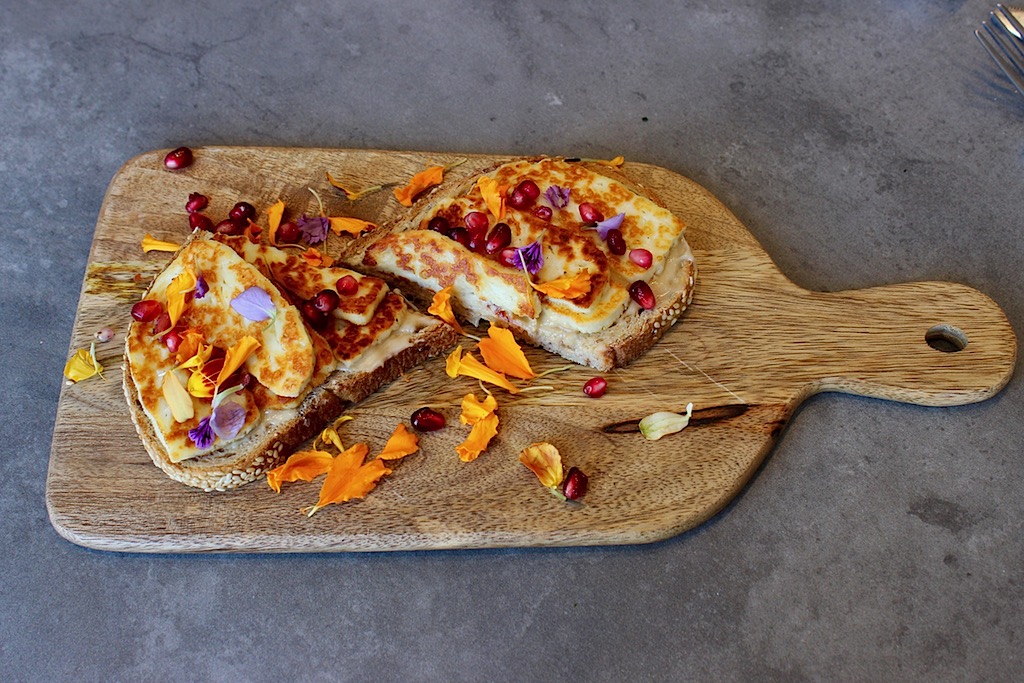 According to Hunaidi, the halloum and maple butter toast ($11) is where the Levantine really meets Canada on her menu. After tasting maple butter from Spade & Spoon at the Leslieville Farmer’s Market, Hunaidi now serves the Guelph company’s product on a bed of gluten-free toast topped with grilled halloumi cheese from Montreal, pomegranate seeds, and edible flowers. 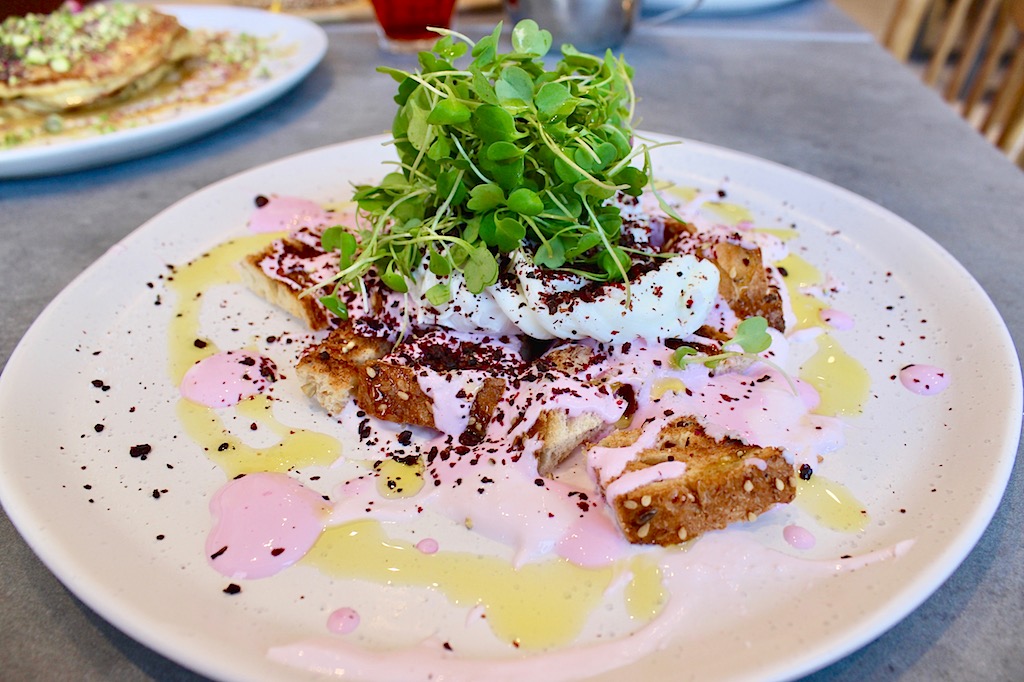 Cold poached eggs, you say? Actually, yes please. After finding that she could mix her house-made lebneh with a bit of pickle juice to get the sour punch Jordanian lebneh is known for, Hunaidi crafted this dish to stand out from the usual eggs-for-breakfast. Two poached eggs are served on toast with pickled lebneh dyed pink from beetroot. The perfectly runny eggs are then topped with crushed sumac berries and seasonal greens ($12.50). 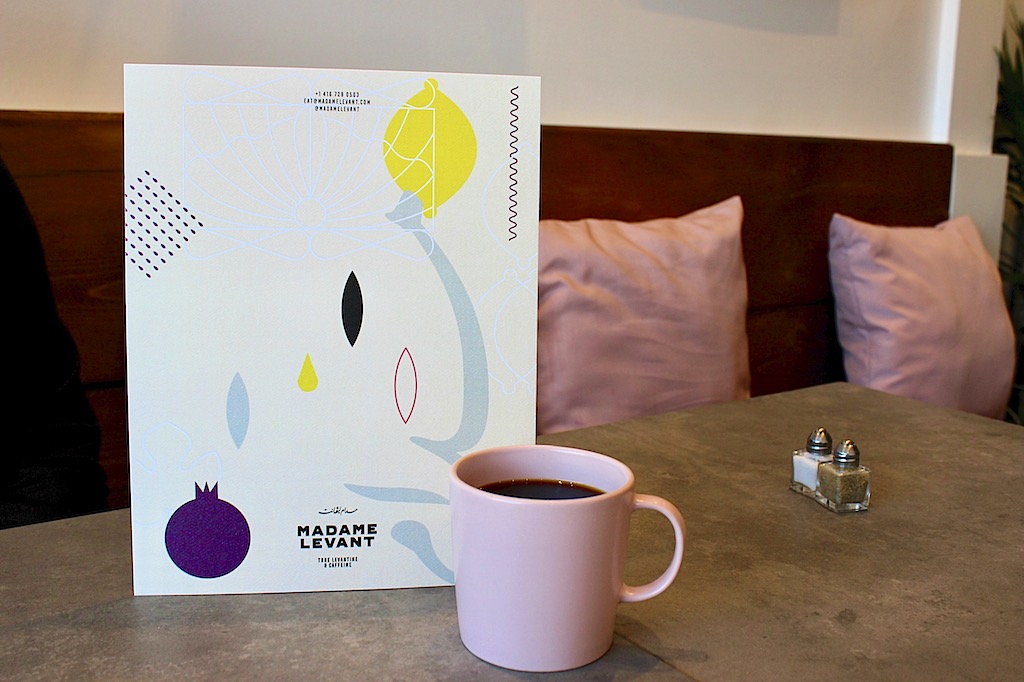 Like all great brunch spots should (but precious few in Toronto ever do), Madame Levant serves bottomless Hale coffee for just $3. Patrons can also opt for mint tea, orange blossom tea, kombucha, or San Pellegrino.

The restaurant is intimate and chic, with pastel pinks mingling with woods and metals for a comfortable, stylish ambiance. Hunaidi’s family built everything in the restaurant except for the designer tile floors, and the culinary team works in an exposed kitchen tucked at the back of the restaurant. Half-booth tables flank one side of the restaurant while bar stools and high tables fill the rest of the space. 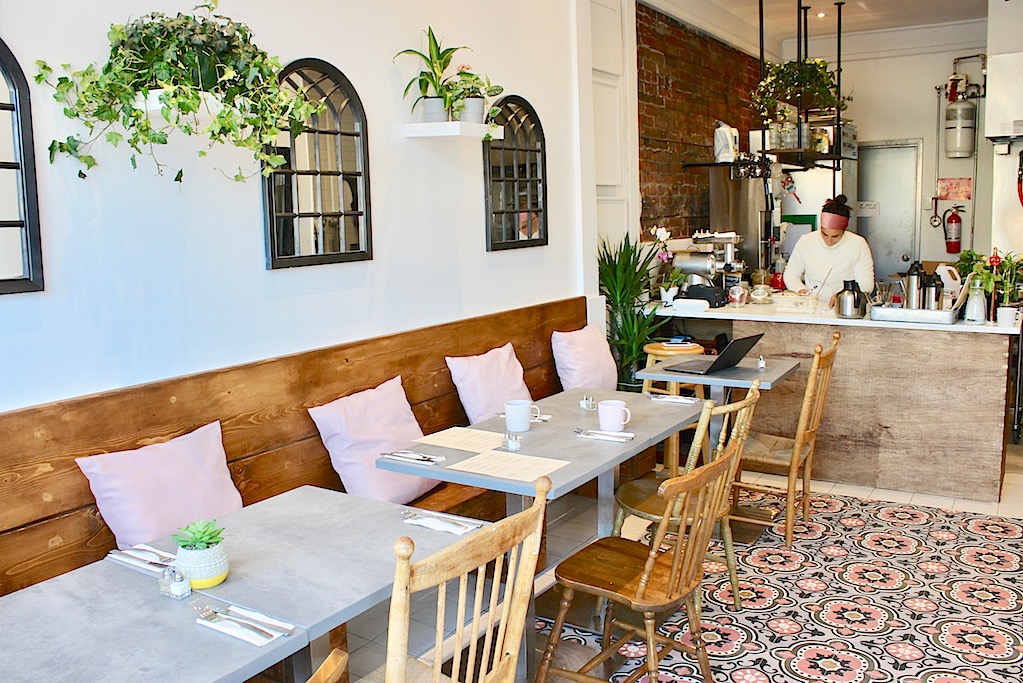 While everything about Madame Levant is inspired by the region from which the recipes originate, the name itself isn’t a reference to the powerhouse young Jordanian-Canadian woman behind it all.

“She’s someone, but she’s not me,” says Hunaidi with a smile. “She’s someone who controls all her sons, everyone obeys her, she makes the best food ever. When she speaks, everyone stops talking. The neighbours are always waiting for her to give them the update. She’s that person. She’s the boss lady.” 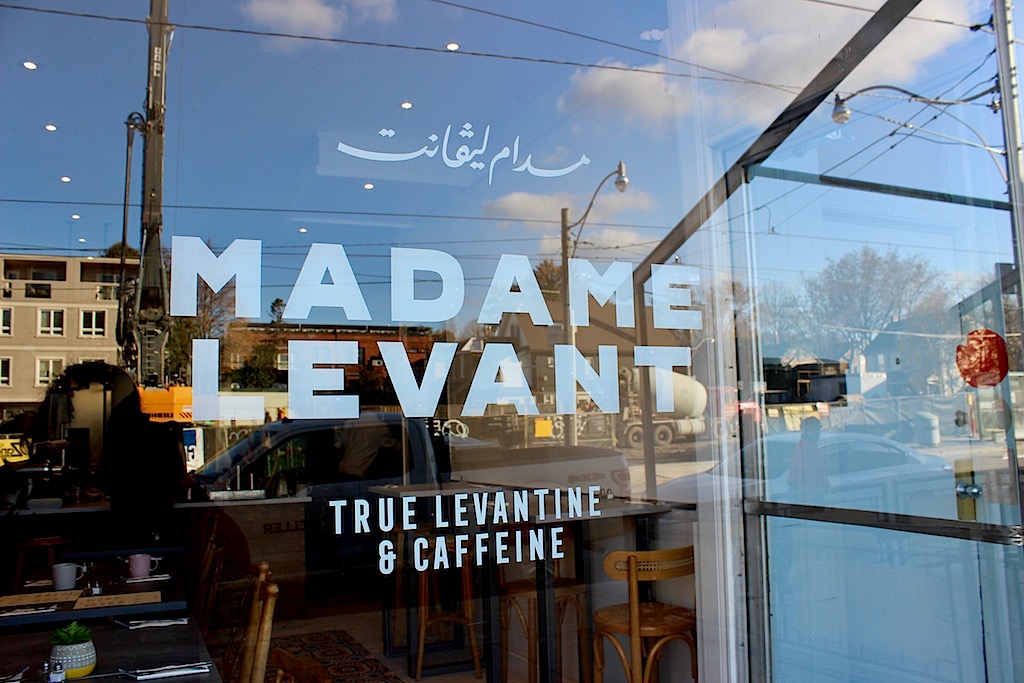 By: Saliha Chattoo Published on: Nov. 15