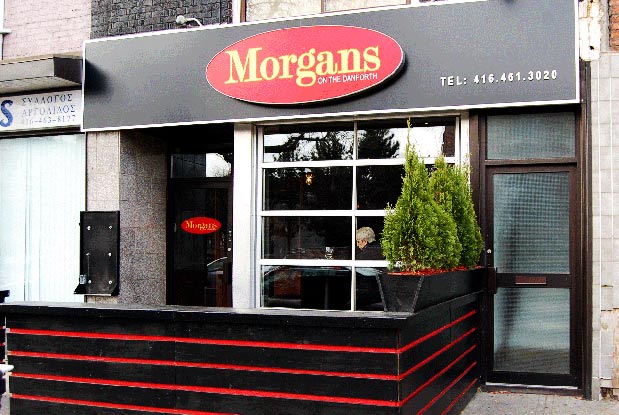 Morgans on the Danforth

It’s three days after the opening of Morgans, the new gastropub that’s taken over the old Taps and Tales spot at Danforth and Greenwood, and sleep-deprived chef Anne Sorrenti is glowing. She says she wants to watch us try the polenta appetizer ($9), which is crispy on the outside, soft on the inside and sitting in a bed of rich tomato sauce, topped with taleggio cheese and triple a mushroom sauté (crimini, shitake and portobello.)

We admit we’re not polenta people, but in the interest of journalistic integrity, we give it a go. Turns out, the polenta rocks. As in, it has flavour, and a tasty one at that. 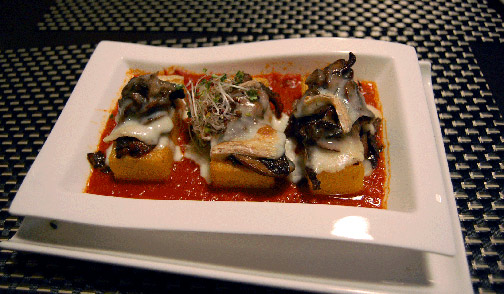 Turns out, Toronto’s happiest chef makes darn good food. Already popular is Morgans “double smoke” ($16), a burger made of ground chuck and angus brisket. It’s topped with double-smoked bacon and apple wood smoked cheddar, and tastes like a happy, fine meat explosion in your mouth. The hand-cut frites as a side are thin, not too salty, and a perfect companion to meat burger champion on your plate. The soft bun, and all of Morgans’ bread, is from Ace Bakery. 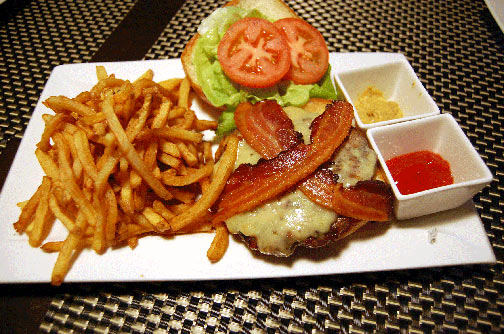 Despite her happiness, Sorrenti is hardly wet behind her chef’s ears. Before coming to Morgans, she was the volunteer chef at Wychwood Barns Farmers’ Market, and in her spare time, also worked for the Hot House Cafe, where some of the Morgans team hails from. Co-owners Peter Crabbe, Curt Hospedales, Andrew Laffey and Kevin Smith have all been invloved with Hot House, and are all scrambling to put the finishing touches on Morgans.

“The tables aren’t our’s,” Smith says. “We just needed to put something up [in time for opening].”

We can’t tell. Walking in, Morgans has the comfort of a long-time neighbourhood pub. Smith, equally sleep deprived, is calm, welcoming and friendly. He says they worked with the original wood décor, and added some mirrors for a funky, modern touch.

“We’re trying to provide the neighbourhood with good food, good beer and good wine,” Smith says. “There’s a need for that here.”

Meanwhile, Sorrenti says she is still sorting out her suppliers. She has good relationships with the farmers at Wychwood, and is using those contacts for Morgans. Whenever possible, smoked fish comes from the Georgian Bay’s Akiwenzie’s Fish (when we were there, a snow issue had interrupted the stock). 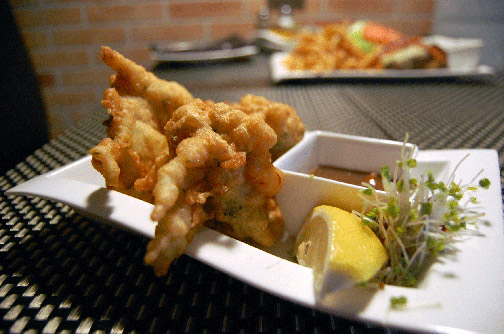 “Local, sustainable food is more of an issue for me,” Sorrenti says. “I would rather have local pears than organic ones from Australia.”

The beer and wine menu is creative and enticing. There are 14 beers on tap (including a cask and a cider), and most, such as Muskoka Brewery's Mad Tom IPA and Flying Monkeys Hoptical Illusion, are Ontario craft brews. Smith says they have wines by the glass that aren’t available at the LCBO.

And for Taps and Tales fans, bartender Anthony , who knows “everybody,” is still serving drinks at Morgans, making it feel more like home.

“We really like the idea of a neighbourhood bar,” Smith says. “And Anthony is a real asset.”