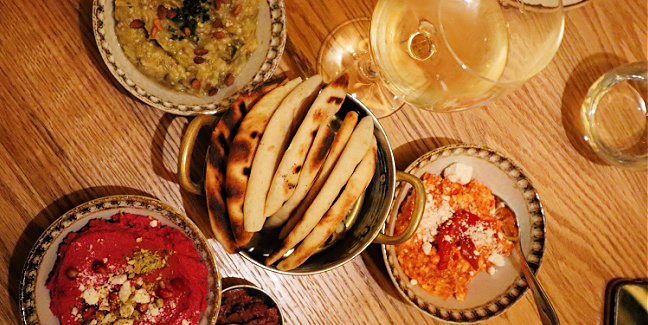 Myth restaurant is a dazzling Greek restaurant, from UNIQ Hospitality Group. It takes over the Citizen, a now-closed nightclub that previously occupied the space.

The restaurant is a personal project for the family-owned group, according to co-owner Matty Tsoumaris. Myth is a reincarnation of the hospitality group’s erstwhile first restaurant, also dubbed Myth, which opened on the Danforth in 1994. “That was the first restaurant we got into as a family,” explains Tsoumaris. “It's a project that's close to us because we're all Greek, so we’re very familiar with the culture and the cuisine.” 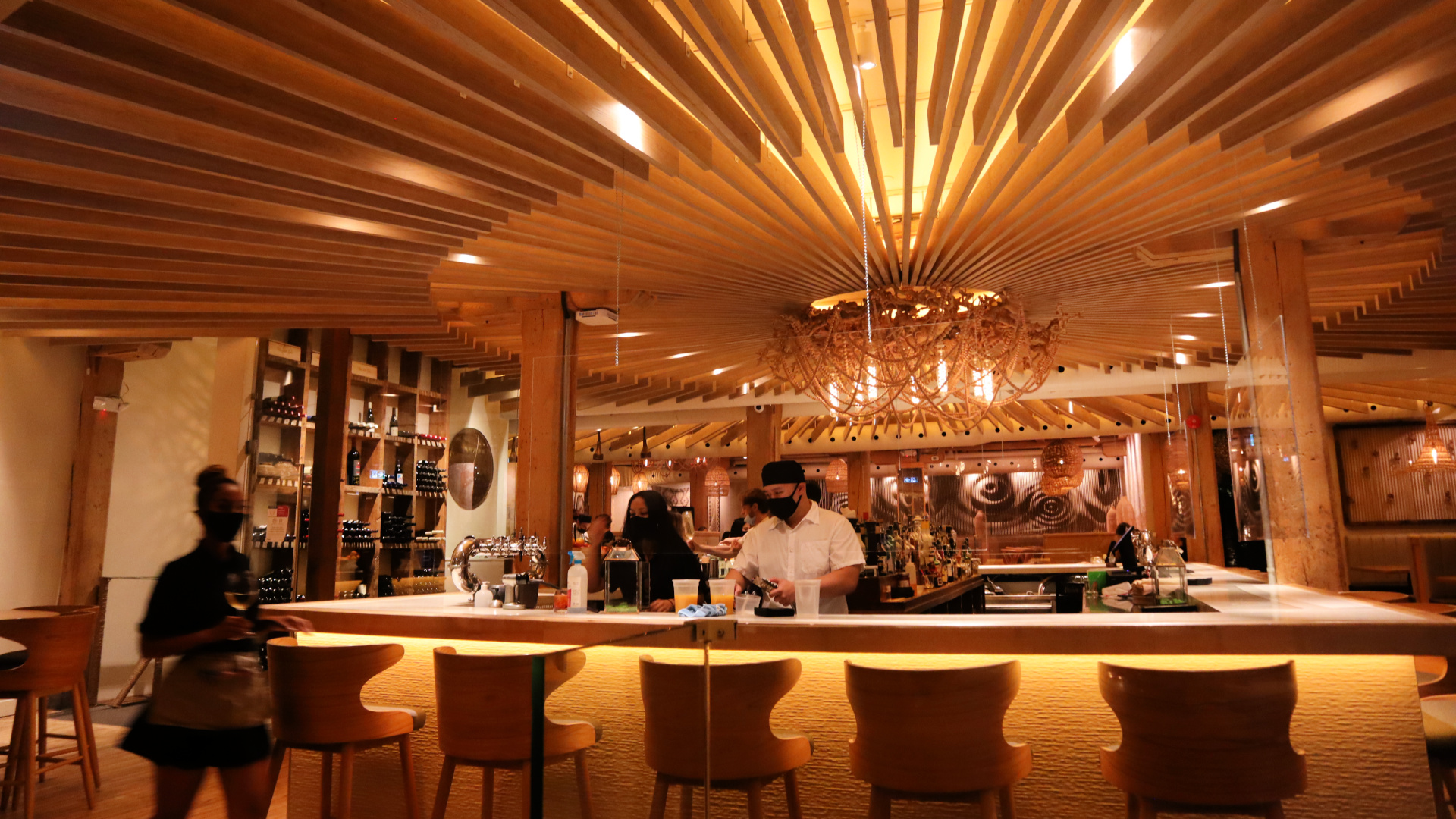 The new Myth draws inspiration from the island of Mykonos for its upscale, Mediterranean seaside vibes. With lounge-like music, well-heeled diners and flashy presentations like dishes lit aflame tableside, Myth has plenty of panache but offers as much substance as style with its refined approach to classic Greek dishes.

Myth’s menu features expertly executed iterations of traditional Greek fare, with a focus on seafood and sharing-style platters. “We want people in groups to order a little bit for the table and kind of nibble and make your own bites as you go,” explains Tsoumaris. 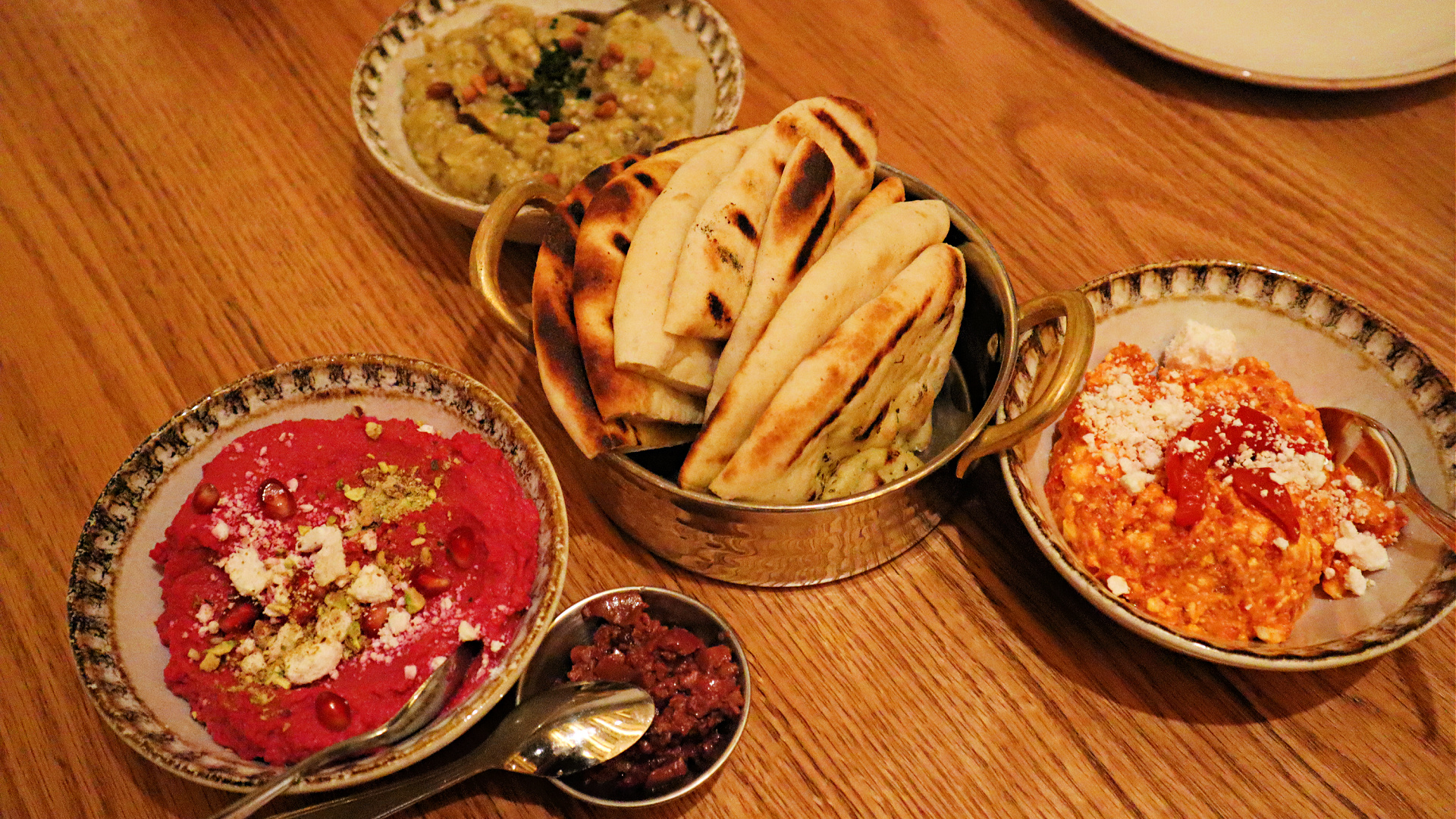 The tirokafteri, a spicy feta dip, is the standout of this meze spread, which is served alongside delicately charred pita. It also includes beet hummus with pomegranate and pistachio; melitzanosalata (eggplant dip); and olive tapenade. 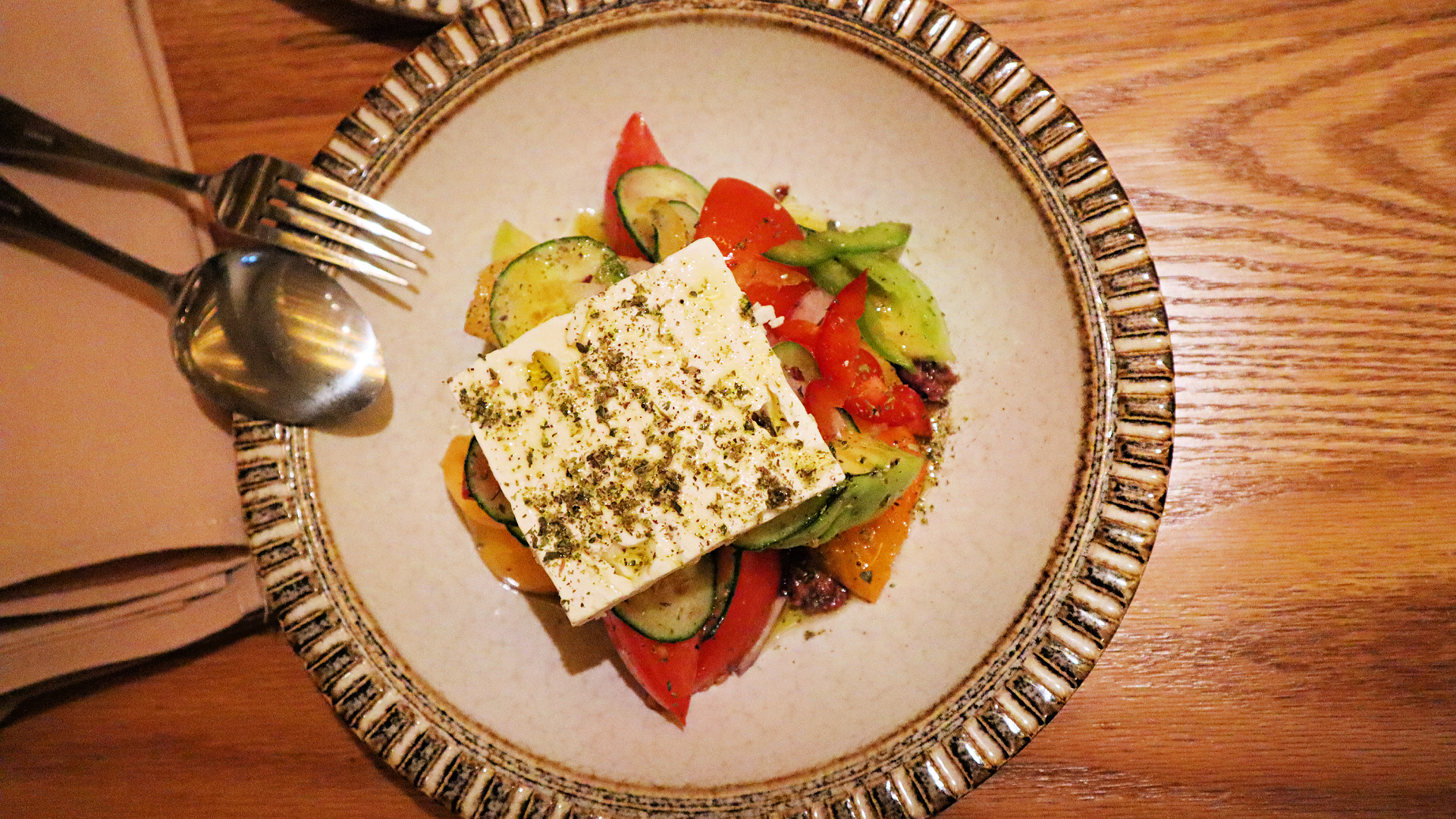 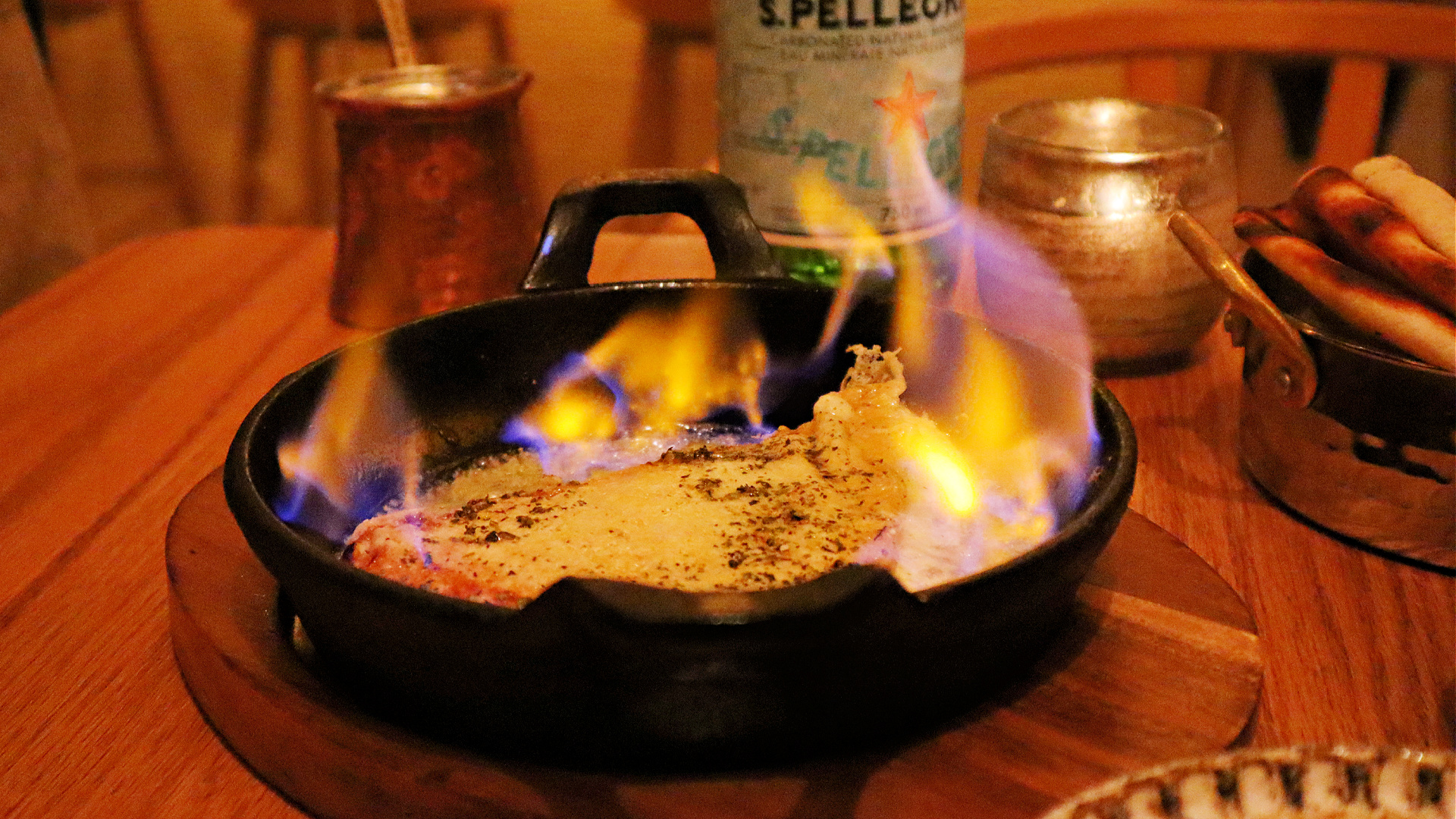 The saganaki is dramatically lit on fire tableside using a shot of ouzo, before being quenched with fresh lemon juice. The sizzling result is an indulgent triangle of kefalograviera cheese that’s warm and creamy on the inside, crispy on the outside and perfect for slicing off in thick slabs to sandwich into toasty pita. 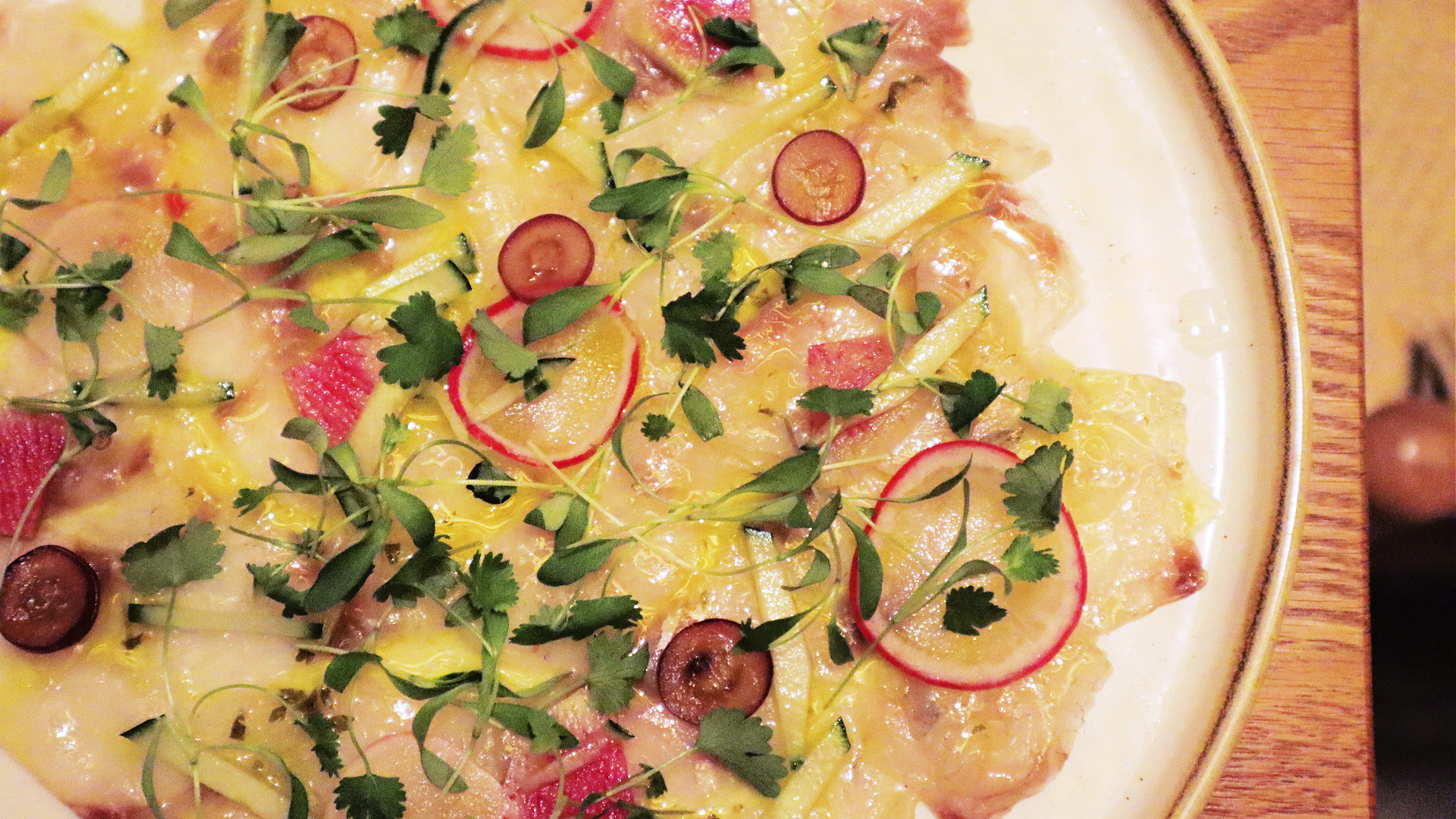 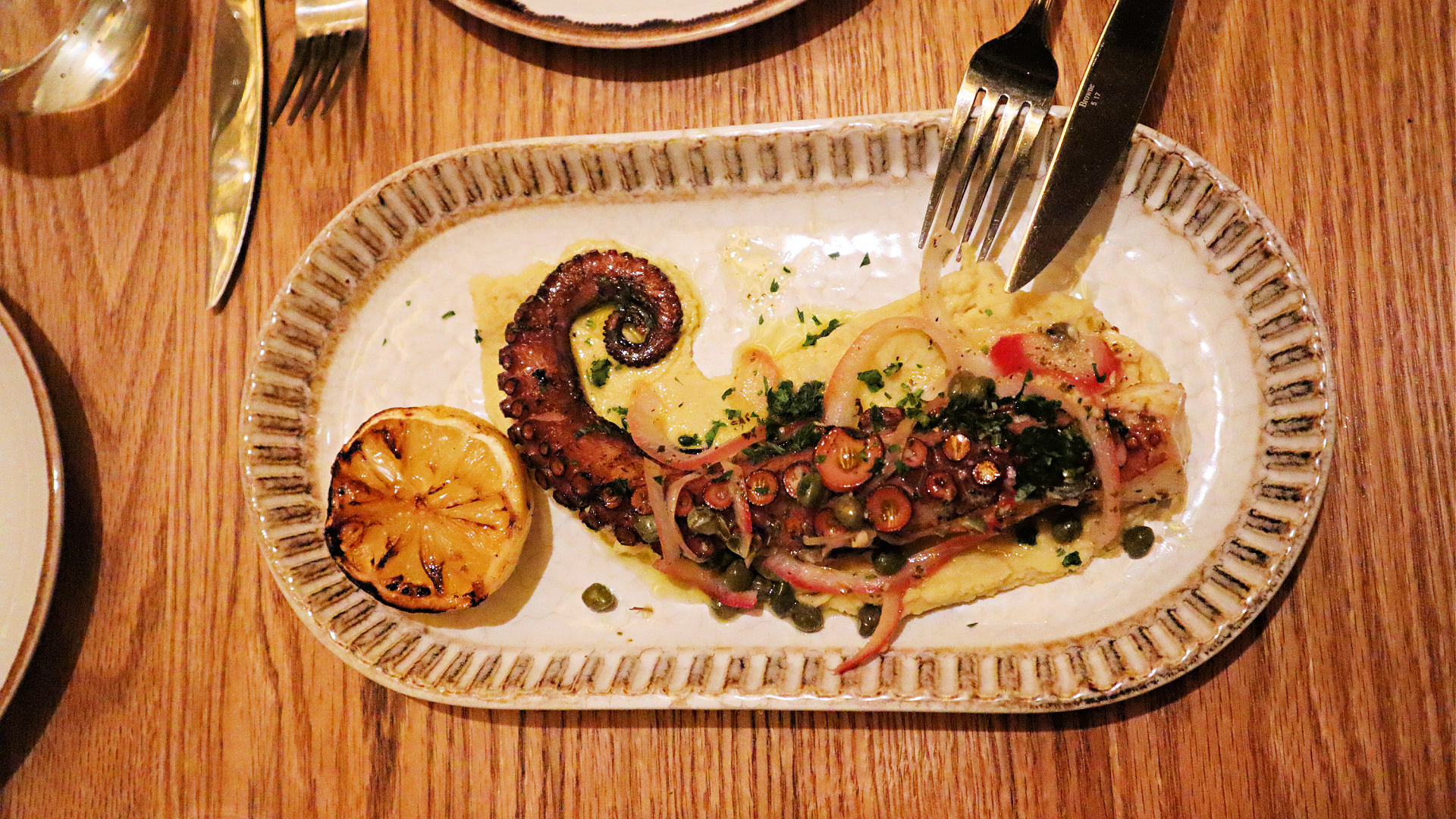 The xtapodi sti skara sees a beautifully-grilled octopus tentacle served over a bed of puréed fava beans and topped with a glug of extra virgin olive oil. 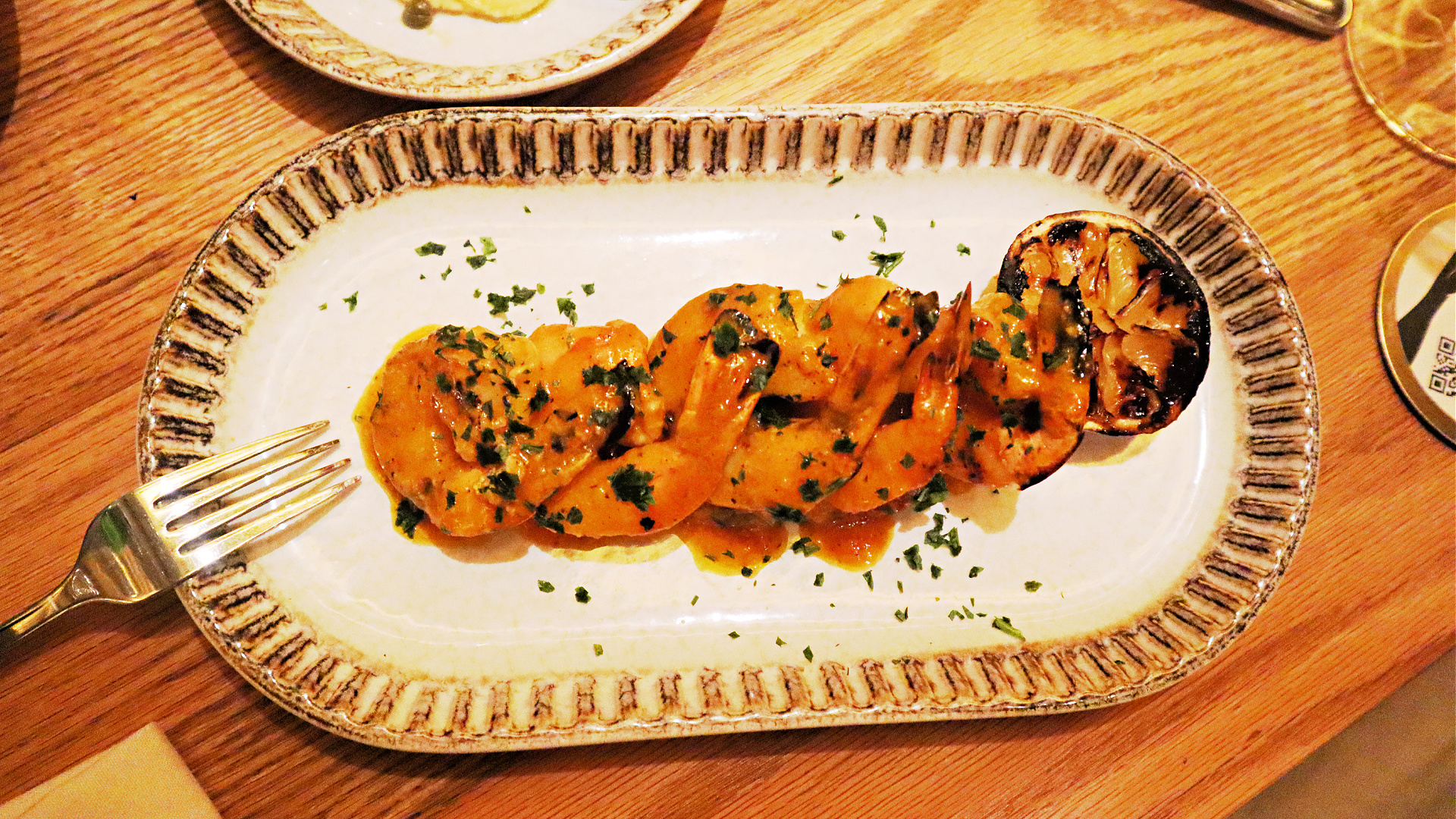 The shrimp sti skara is a slight departure from the restaurant's Greek menu that draws on chef Sergio Abrunho's Portuguese heritage. The grilled tiger shrimp are dressed in a spicy romesco sauce made from a recipe so secret, supposedly Abrunho is the only one in the kitchen who knows it. 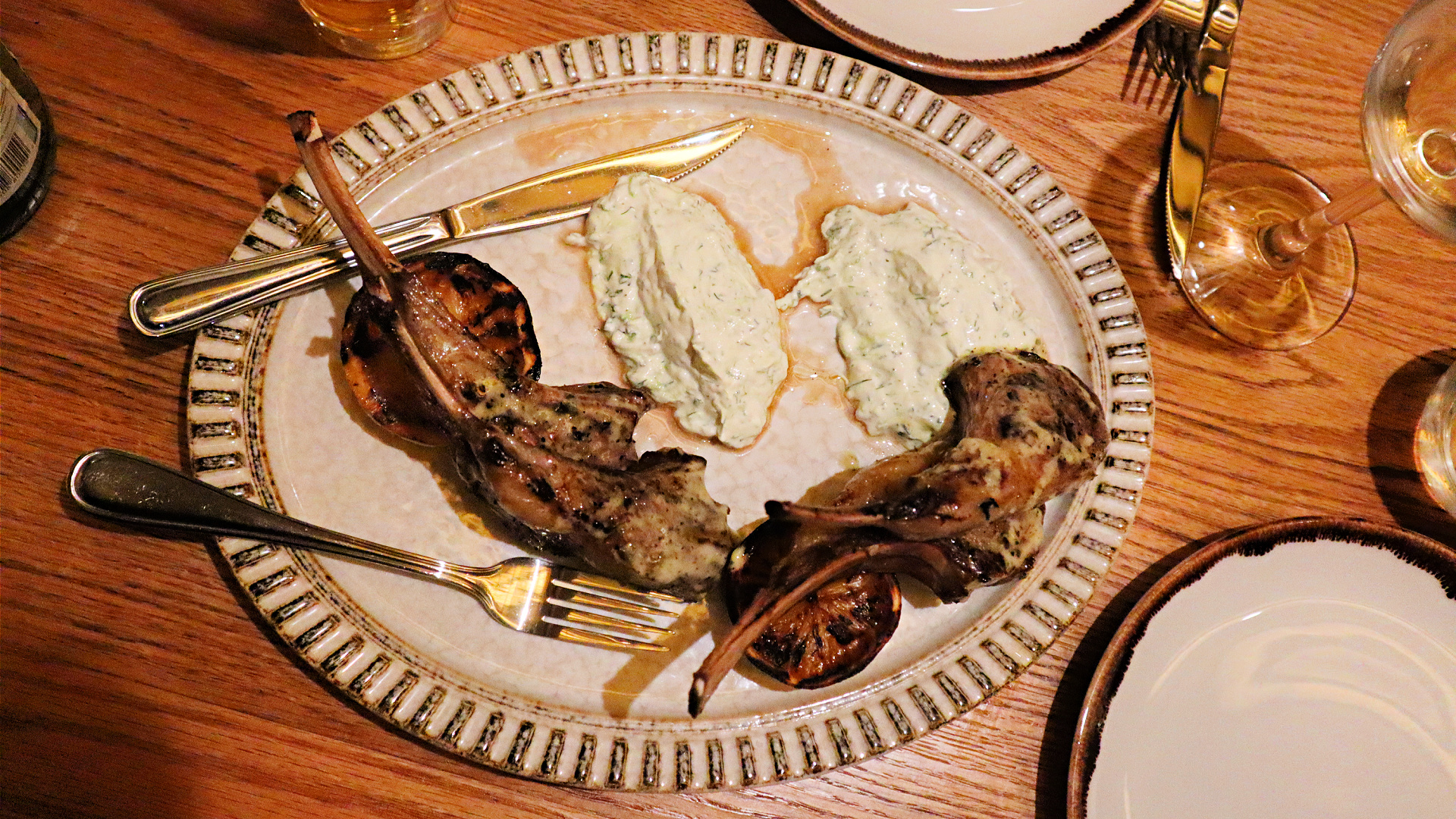 The paidakia is a simple but flavourful dish featuring tender, grass-fed Australian lamb chops served with a side of velvety tzatziki. 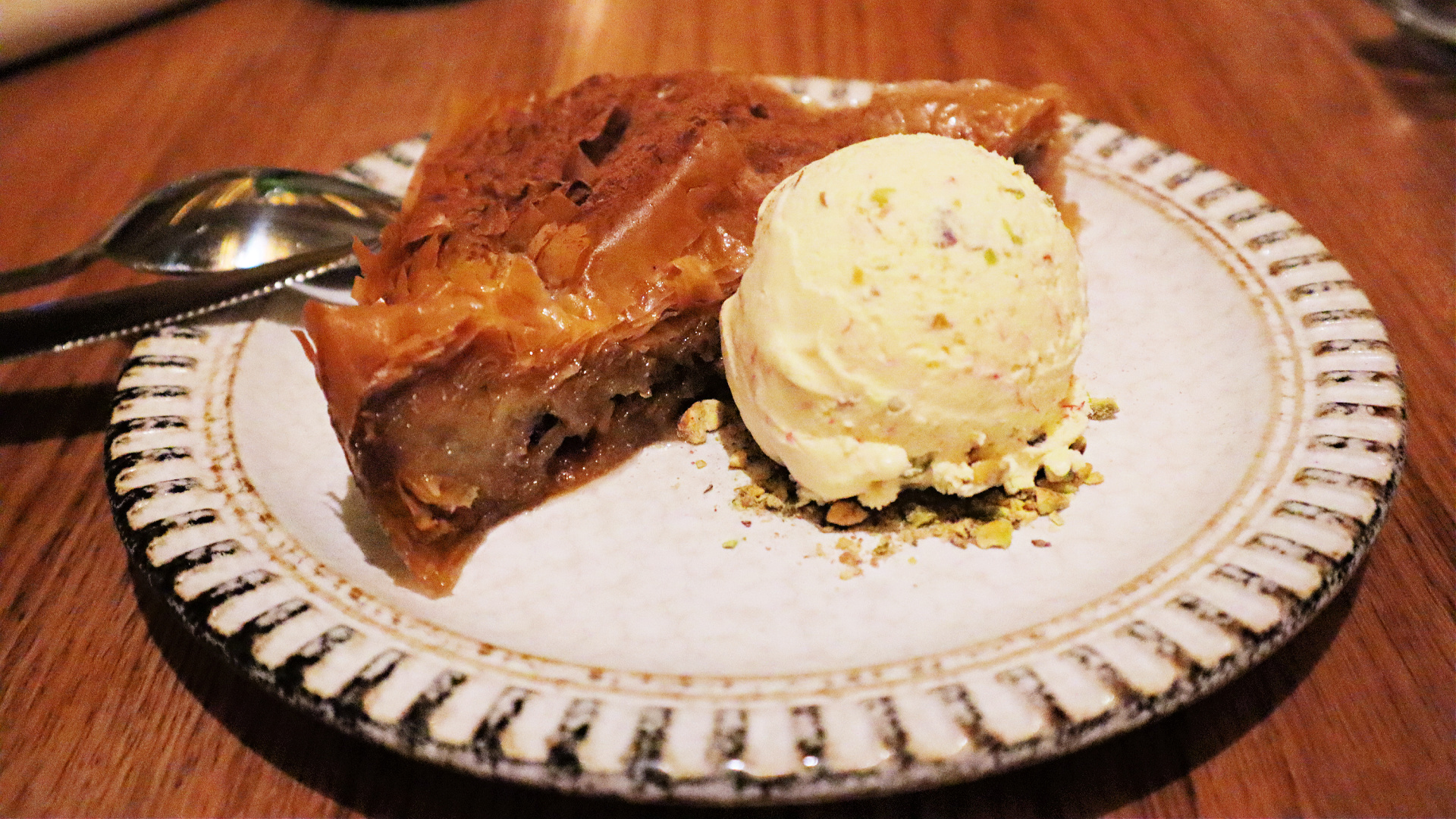 Dessert is the hugely-portioned, honey-soaked baklava of our dreams (putting the typical, snack-sized version of the pastry to shame), served with an addictively creamy burnt honey gelato.

The cocktail menu also pays homage to Greece, with many drinks featuring Greek liqueurs like ouzo, metaxa and mastiha. 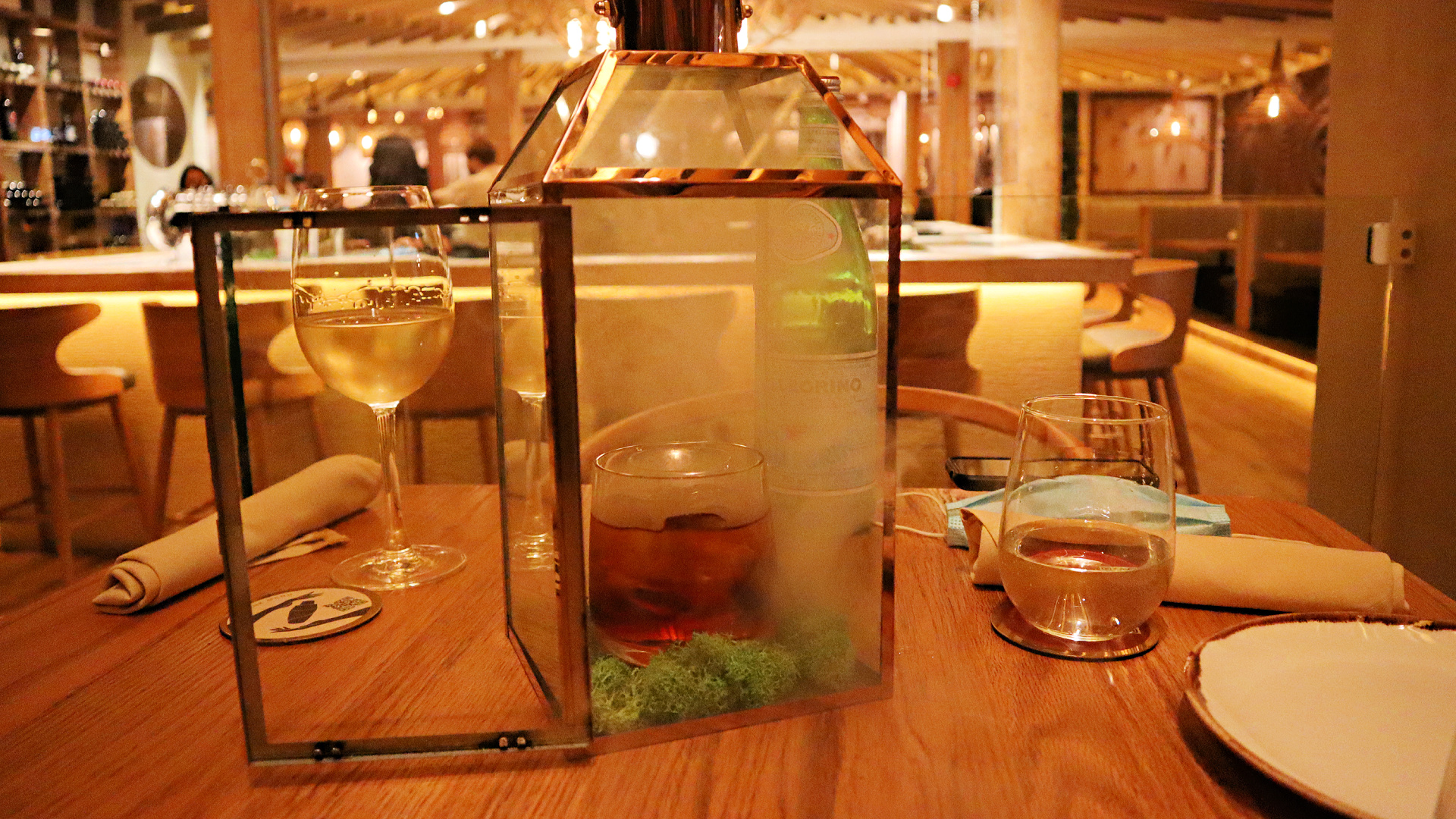 Some cocktails, like the Destino, highlight the restaurant’s penchant for drama. Featuring Dewars 12, Metaxa 7 Star, Aperol and Martini Rosso vermouth, it arrives at the table contained in a glass lantern filled with smoke. 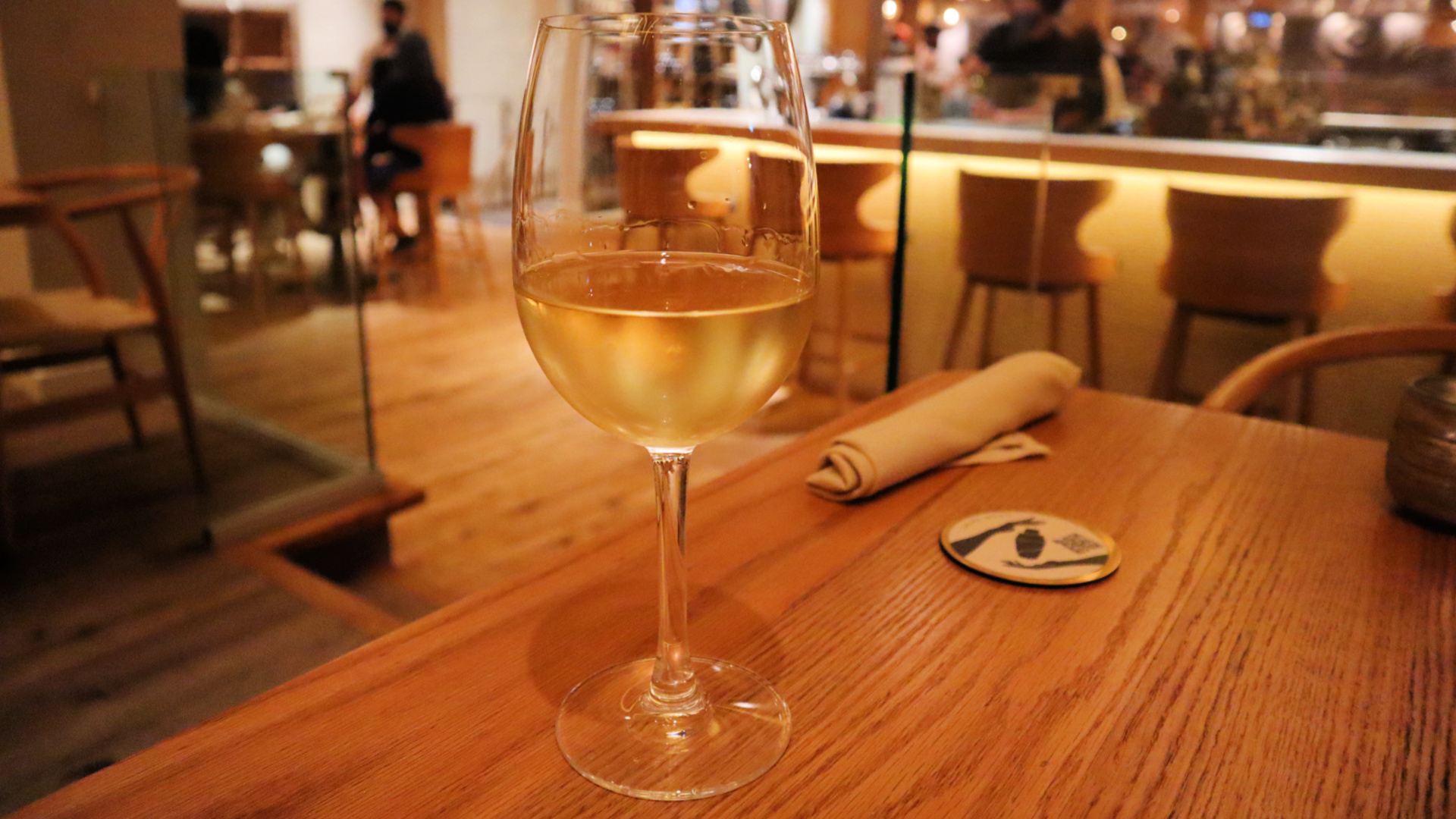 The wine list emphasizes Greek and Mediterranean bottles. “We wanted to work with Greek vineyards — they’re really good, even though they’re not really known for their wine like other areas of Europe,” says Tsoumaris. “You can’t find them on too many menus in the city, so it gives people a chance to come to us and try them.” He adds that he hopes to soon offer Greek beers as well.

Myth’s beautiful, 5,000 square-foot space draws on Mykonos’ sandy, rocky terrain for its earthy colour palette. The restaurant’s show-stopping entrance is framed by stone imported from the Greek city of Thessaloniki. “These types of stones were used back in the day to divide land in Greece," says Tsoumaris. “You still see them everywhere.”

One wall features a huge mural depicting the 'Akrotiri Boxer' fresco, the original of which dates back to 1700 BCE. Tsoumaris remembers having a replica of the fresco in his room when he was growing up. The main bar is dominated by a sun-beam-like wood ceiling installation, while another wall displays classic pottery imported from Greece. Myth also has a lovely patio set along Brant Street, which evokes the same beachy vibes with handwoven lamp fixtures and leafy accents. 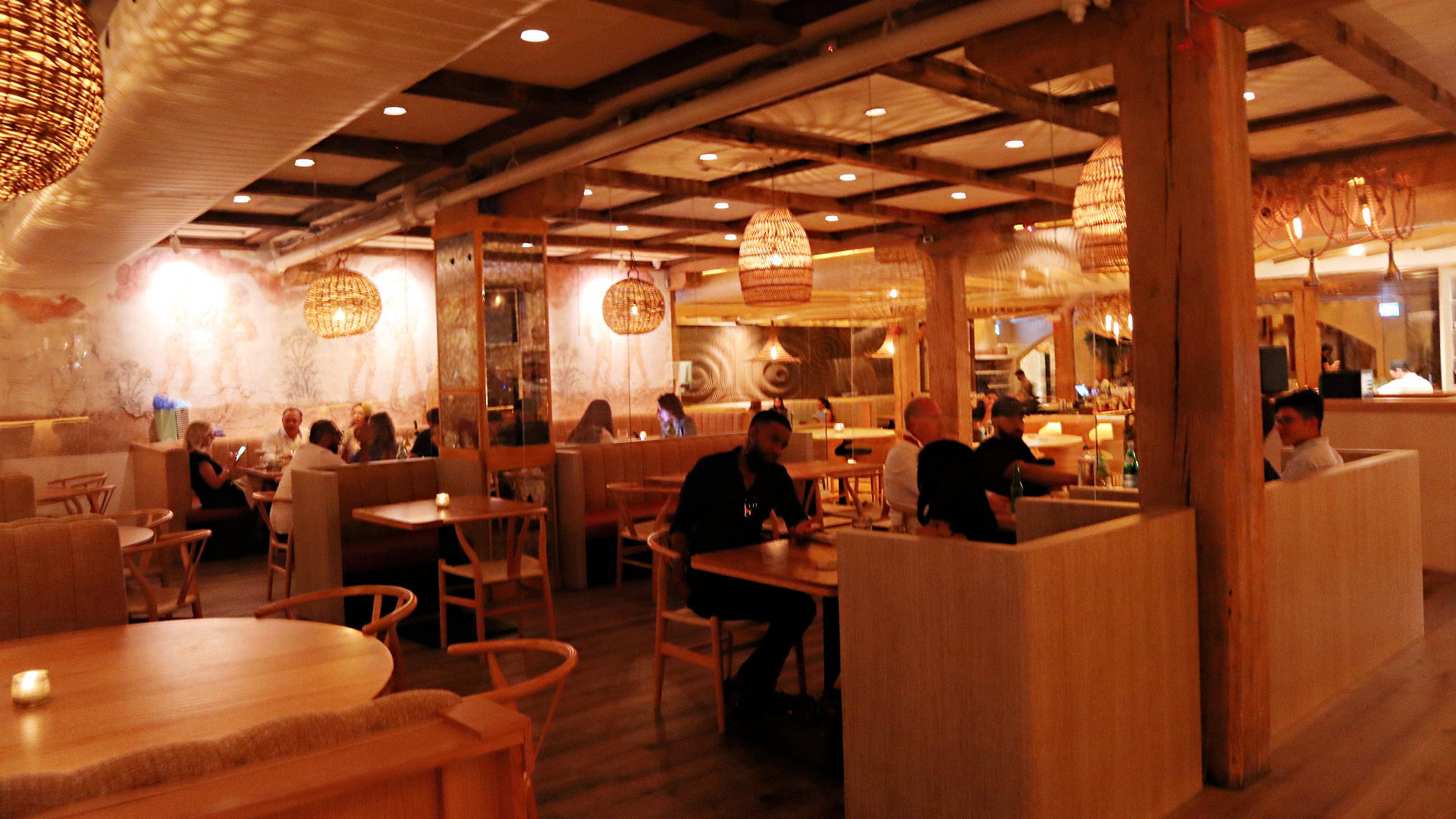 “In Greek culture, food is a celebration — even a family dinner at home with everyone dining together and sharing stories, it’s a celebration,” says Tsoumaris. “It’s not just about the food and drinks — the ambiance, the music, everything combined is what makes the full Greek experience. That’s what we wanted to bring here.”

Words and photos by Jessica Huras; Posted on September 14, 2021