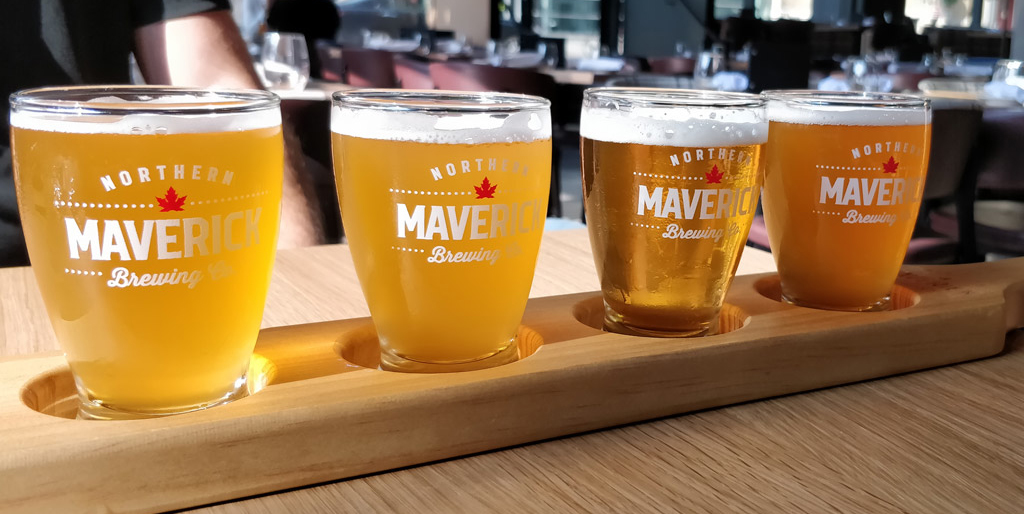 Toronto’s east side has spent most of 2017 playing catch up in the new brewery department with a flurry that includes Godspeed, Saulter Street and Eastbound. In late September, the west side counted a tick in their column when Northern Maverick Brewing Co. opened its doors at Bathurst and Adelaide.

Right out of the gate they are brewing on site with their 10-hectoliter system and brewing team led by Andrew Crowder. He comes off a recent stint as brewing operations manager at Muskoka Brewery.

“We have the ability to brew up to 3,000 hL a year, depending on ale/lager mix,” says owner Jason Kaptyn by way of explaining his brewery’s scale. “What we end up brewing will depend on what our guests want to drink.”

That should be plenty to keep their house taps and retail shop (open 11 a.m. to 11 p.m. every day) well supplied.

Their Handcrafted Lager was the first on the market last fall and has been brewed under contract at Brunswick Bierworks in Scarborough. For the late-summer opening it was joined in the lineup by a series of seasonally appropriate offerings like their First Day IPA and a gose called, what else, Gosezilla. Despite the evocative names, the beers at Northern Maverick Brewing Co. seem designed with steady and solid in mind rather than wacky and different.

At any time three beers will be available directly from 10-hL holding tanks that are connected to their respective taps by champagne-grade piping. The idea here is that these high-turnover beers will taste fresher because they haven’t been packaged into kegs.

According to Kaptyn, he “got into craft beer through food. I was always the guy saying, ‘put down that chicken finger and let me make you some real food.’ ”

So, it makes sense that he went out and hired Mark Cutrara (Bar Hop Brewco) to helm the kitchen. They serve a burger and a 30-day striploin but Cutrara hopes diners will also explore the seafood side of the menu with options like a house-smoked trout dish and one featuring octopus finished on a blazing-hot grill.

Speaking of pescetarian indulgence, they have set aside the first 15 seats at the bar for a front-row view of the oyster-shucking operation.

Kaptyn has fond memories of eating at Cowbell, Cutrara’s Queen West restaurant that was one of the first in Toronto to focus on farm-to-table sourcing and charcuterie. Naturally, that means house-cured meats have their own aging space with a window offering a view for passing pedestrians.

Cutrara’s cooking will also be in the spotlight at the chef’s table where guests will be served a six-course tasting menu ($58) paired with a matching beer flight ($20).

The impressive space combines a dining room, private space upstairs and plenty of room on the streetside patio for a total seat count around 400.

Even though beer is the main focus, cocktails have not been left behind. Lead bartender Japhet Bower was hired to design an inventive list of drinks,  many of which feature beer-related concoctions like hop extractions.

Just as the east-side openings have depended on denizens from the semis in Riverdale and Leslieville, Northern Maverick Brewing Co. will need to connect with those in creative offices and condos on King West. Toronto is still in a craft beer expansion and it’s still an open question where the winners will shake out.