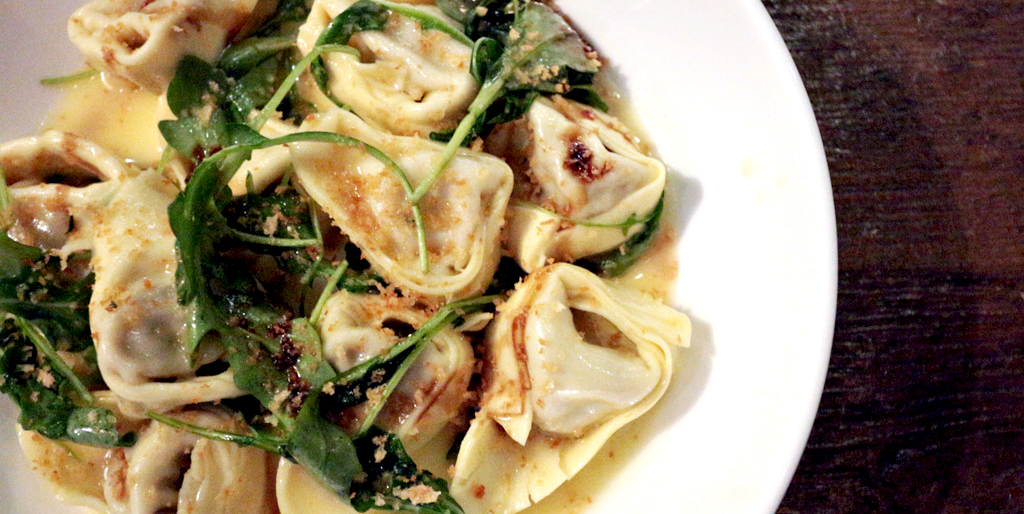 Oretta, “is the name of a young, urban Italian woman who has style but is grounded in her Italian roots,” says Mele. The space, he adds, is meant to reflect that and be “contemporary but approachable.”

The multi-functional restaurant has a quick-service counter and café that is accessed through a separate side entrance from 8 a.m. to 5 p.m. that offers pizzas, paninis, frittatas and an assortment of pastries created by their in-house pastry chef.

The soaring, ground-flour dining room is built around a centrepiece bar, which is the focal point of the room. Rich colour tones, textures and accents of brass, wood and marble highlight the large communal tables and banquettes. The room is a relaxing and casual space “designed as an any-time-of-day spot,” says Mele.

The upstairs will serve as a private events space, complete with a kitchen studio where David Rocco may or may not be seen from time to time. The wrap-around counter creates an intimate feeling, as if you were at someone’s house. The room can be divided into two private rooms or booked as a whole.

The bar features a cocktail list of “twists on some classics while keeping Italian influence,” says Jenn Boose, the bar manager at Oretta.

The exclusively Italian wine list is brimming with chiantis, pinot grigios and amarones; though there is the added surprise of an Italian chardonnay for those looking for something rare.

On tap are Peroni and Pilsner Urquell with a short offering of beers by the bottle such as Kronenbourg Blanc, Mad Tom IPA and Liberty Ale. On the flip side, the amaro list is extensive including a Limoncello amaro, which is fairly unusual for Toronto. Amaro is a family of bitter digestifs commonly consumed in Italy and “helps you digest so you can eat more,” says Boose.

To lead their kitchen, Oretta has recruited Christian Fontolan, who was nudged into culinary school by his parents. “Cooking allowed me to travel,” he says, of his kitchen jobs in restaurants from the Amalfi Coast to England to Mexico.

He was lured to Toronto to help open a restaurant, a project that never came to fruition. He decided to stay, met a Canadian woman and the rest, as they say, is history. When asked about his approach to the menu at Oretta, he states “I cook from my heart; what I like to eat.” At the base of the menu are traditional flavours but this isn’t your nonna’s Italian. Fontolan says his mother was never a traditional Italian cook, she would flip through recipes and experiment, something she still does to this day.

The menu is divided into plates for sharing, appetizers, pizzas and pasta (which are a staple at Oretta) and a small list of mains. The Frito Misto ($14) is a popular dish that features smelts, calamari, bay scallops and scallops lightly coated in a gluten-free batter (tapioca flour and cornstarch) and served with a wedge of lemon and beet chips.

Burrata ($14) is served atop a mixture of pickled banana peppers, agrodolce carrots, pistachios and herbs. Agrodolce is an Italian sweet-and- sour dressing, the tartness and sweetness cuts through an otherwise rich and creamy burrata.

A daily bread basket is also available featuring an assortment creations from the bakery. On the night I’m there it includes a rye filoncino (akin to a baguette) and a spinach-and-parmesan bun served with an olive oil spread.

There are two pages of pizza offerings, red and white pizzas with an assortment of toppings. The dough is made in Romagna style. Fontolan says that while Toronto seems to have an abundance of Neopolitan pizza joints, that style really isn't widely popular in Italy outside of Naples.

The Parmigiana ($18), a pizza that his father used to make at their family bowling alley (which also had a small kitchen that served pastas and pizzas) is topped with cherry tomato, fior di latte, eggplant, sausage, Parmigiana and basil.

Pastas are made in-house and stretch from traditional ravioli to a “purple pasta” which sees red cabbage as the natural coloring agent as the dough goes through an extruder. A pasta of the day will slowly make its way onto the menu.

You should definitely save room for dessert — $16 will get you the chef’s assortment of daily pastries.  Canoli, almond-ricotta cake, toffee and bocconotti (shortcake with Clementine marmalade) gives you a taste of everything. It’s best accompanied by an Americano, beans which come from Barocco Coffee.