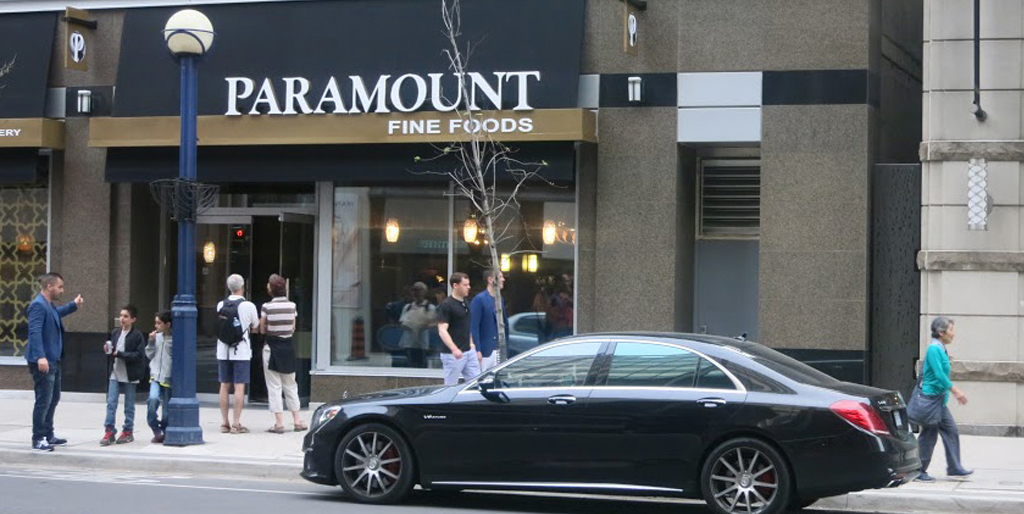 The Middle Eastern food craze took Toronto by storm last year and is still going strong. Luckily for us, this brought us the likes of Fat Pasha, Byblos and Essen.

Paramount Fine Foods is capitalizing on that trend with a bold expansion. The chain first opened its doors in 2007 with their flagship location in Mississauga at Crestlawn.  Its empire currently includes 15 locations; with two in Mississauga and a third is in the works.  The owners are also expanding into international territory with plans for New York, Pakistan and Dubai.

The Yorkville location opened this past Monday and is the first full-service location at 1250 Bay St., where the Perry’s Mens Clothing used to be. The design is minimalist with a mostly wood interior designed by Jump Branding and Design. Large murals showcasing Lebanese cuisine and Arabic quotes span the walls on one side. Towards the rear is where you’ll find a bountiful display of sweets which open up to the adjacent open kitchen.

“We want to be transparent about our food” says Hady Al-Haidari, the manager of the Yorkville location who happens to be sitting at a table nearby, grabbing a bite to eat. He states that future locations will be adopting open kitchens. The restaurant receives three shipments a week from the commissary and everything is prepared in-house.

Regardless of the location, Paramount will always hold its values as a priority — a family-friendly environment serving fresh halal food and authentic Lebanese cuisine. The restaurant is halal-certified and adhering to those guidelines means the absence of alcohol, a bold move for the high rollers in Yorkville. But Paramount maintains that the quality, freshness and taste of their food will win their customers over.  And with so many options in the area for drinks, they’re not worried.

In case you’re unfamiliar with the cuisine, there is a digital menu that showcases the options in images and the staff are quick to offer up suggestions.

Regardless of what you order, a basket of pita bread out of their “brick” oven will arrive at your table.  It goes with just about anything on the menu from hummus to labneh.

You will definitely want to grab a drink to quench your thirst as most of their offerings skew to the side of salty. The Paramount Special is a meal in and of itself; a blend of fresh strawberry and mango juice mixed with fruits, nuts, ashta cream and honey. It looks like a Lebanese halo-halo.

For a good sampling, their mixed platters are plentiful. The mixed BBQ family platter includes BBQ beef and shish tawouk chicken skewers and kafta (meatballs) with your choice of rice or fries.

Manakeesh, which is akin to pizza is devoid of processed cheese and overly salted meats.  Instead, you’ll find melted Accawi cheese (similar in texture to Feta) with Zaatar, an herb paste mixed with sesame seeds and other spices.

If you somehow muster up the room for dessert, an assortment of baklawa stuffed with pistachio or cashew nuts awaits.  Or for the adventurous, opt for the kinafe, which I can only describe as melted cheese with a layer of fried vermicelli on top that is drizzled with syrup.