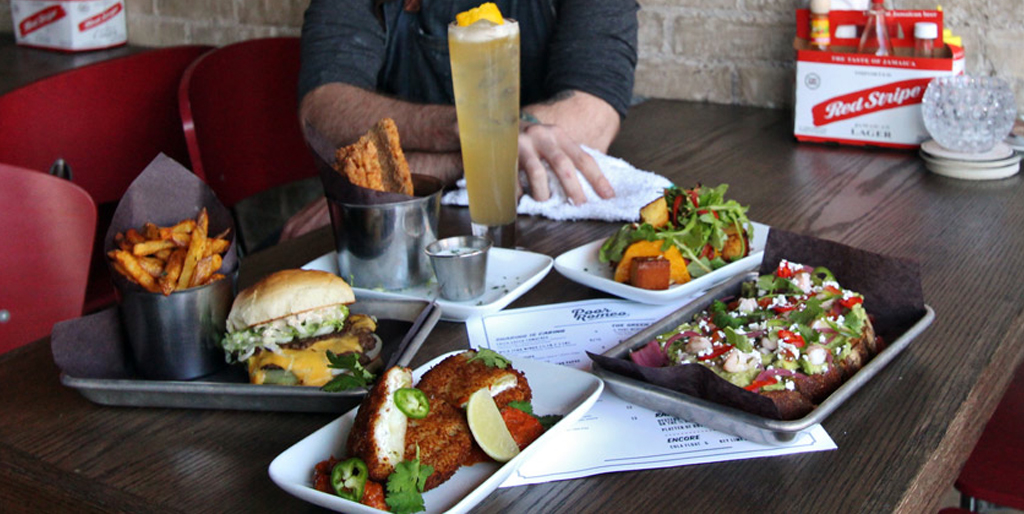 Gerrard East has become a hot spot in the east end for new restaurants with up-and-coming chefs. Andy Wilson, executive chef of Pinkerton’s Snack Bar (an anchor on the strip) is now a first-time restaurateur with Poor Romeo, just across the street.

Teaming up with Pinkerton’s owner Marc Baglio and long-time industry veteran, Adam Graham (formerly with the King Street Food Company for 17 years and a bartender by training), the trio hopes to make their dive bar a neighbourhood staple.

As with Pinkerton’s, Poor Romeo is a spot that marries music with great drinks and food. Its moniker is a nod to a Thin Lizzy song from their Jailbreak album.

Beer is a big part of the beverage program at Poor Romeo. “We have a mix of hyperlocal craft and grandpa beers, a nod to old Gerrard,” says Wilson, who is a “big beer nerd” and whose girlfriend is a cicerone and Prud’homme sommelier.

Indeed you’ll find Molson Stock Ale and Hofbrau Original Munich Lager on draught next to “stuff you’ve never heard of” such as Halo Tokyo Rose Saison and Blood Brothers Shumei IPA. The by-the-bottle beer is stubbies-focused with local brews such as Beau’s Lug Tread, Woodhouse IPA along with the old-timer beers, like Coors Banquet and Red Stripe.

“We’ve all done cocktail culture; we’re familiar with tinctures but we’re a local bar and we’re here to sling some pints,” says Graham. The cocktail menu is a smaller list of signature creations by Graham and it’s definitely a “whiskey-focused kind of bar.”

There’s even a cocktail named after local “rock and roll star” and whiskey ambassador David Mitton, made with Lot 40, maple syrup, Fernet and Angostura. The Beast of Bourbon, Graham’s take on a shandy is also a nod to the famed Rolling Stones song, made with Four Roses, Spicebox, simple syrup, lemon, and stock ale float.

Charlie Lamont (formerly DaiLo) has created piña colada slushies that are “fun, cheerful and reminiscent of high school,” made from coconut milk, a trio of rums and pineapple juice.

The space formerly housed Chinese restaurant Ruyi, a place that Wilson’s girlfriend frequented in her 20 years of growing up in the neighbourhood. “We definitely want to open up to that happy hour crowd because people are kind of coming home to this neighbourhood,” says Graham about the demographic of young families and young workers who live nearby.

Poor Romeo's décor continues to riff on the whiskey and music themes. There’s a wall of vinyl records, a Schenley Whiskey sign that the team scored from Kijiji that was a quarter of a 3-piece billboard panel in the days where it was the ration whiskey of choice for soldiers. “Schenley’s was called black death because it was so awful.”

Lining the stairway down to the bathrooms are throwbacks to pixel-game era days of Pac Man and Alien Invaders. It’s a throwback to the times 80s kids spent in their parents’ basements.  There’s also a sketch drawing of Phil Lynott, the singer and bassist of Thin Lizzy by Greg Court. The bar was designed by George Taxidis (Pizzeria Libretto, Enoteca Sociale) and features lampshades from the Kliegl Bros., said to be the first to create prop camera lighting.

Wilson’s approach to the Poor Romeo's menu is that of a “fast-food eating mentality in America with quality ingredients and chef-driven; it’s all about the pickles and special sauce,” he says. The menu fuses a lot of Latin influences with ingredients like queso fresco, which Wilson makes in-house, chorizo and chimichurri, like “Southern states intersecting California baja.”

The PR Smash Patty Burger, however, is Wilson’s pride and joy. It sees a pair of three-ounce patties sandwiched around cheese and some “good old-fashioned pickles” and a side of thyme-tossed fries.

There’s also the Fried Green Tomatoes, panko-fried with cream cheese and smoked peperonata – a riff on a jalapeño popper.

As Gerrard East continues to grow as a restaurant neighbourhood, more establishments like Pinkerton’s and Poor Romeo are bound to open.