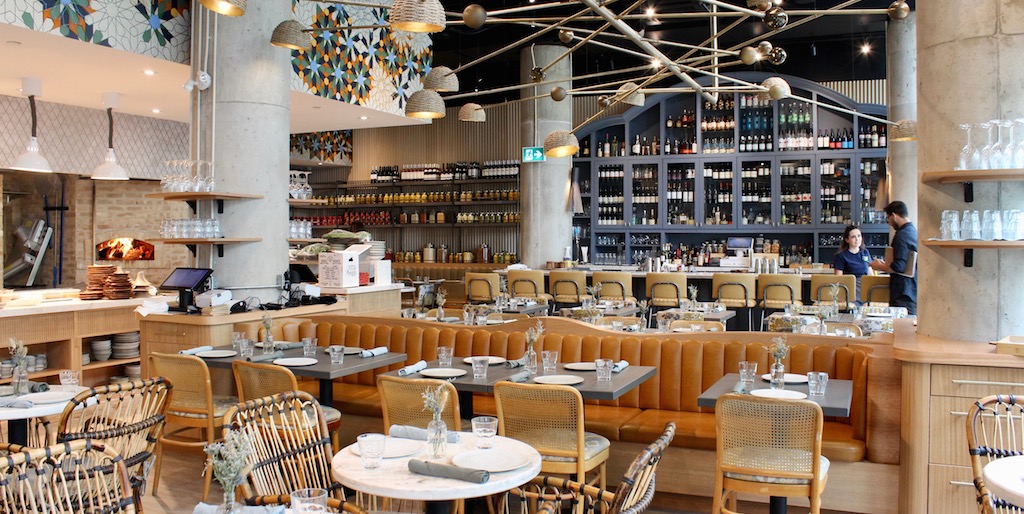 The Iconink empire has added another jewel to its crown as of this June, with the opening of Shook Kitchen on Portland Street. The company has taken a global approach for its restaurants, having launched restaurants that range from Japanese to Mediterranean. This time, the concept for Shook is modelled after the flavours and complex cultural matrix of the open-air markets of Israel (the name “Shook” is a play on the word “Souk” or “Shooq," which refers to a marketplace in Arabic-speaking countries).

“Building up to this menu involved a lot of research and travel,” says executive chef Ben Heaton. “I really jumped into the cuisine of Israel, which is a multitude of other cuisines. There’s a lot of Palestinian food, Lebanese, Turkish, Greek, Syrian, European—and that’s great for me as a palette. It allows me to do so many different things.”

Shook’s menu is completely vegetarian, and Heaton’s team is pickling, jarring, baking, and blending everything possible in-house. The intention to craft the ultimate artisanal and homemade vibe stretches from the food to the décor, as well as to every single hand-laid brick that makes up the wood-burning oven at the heart of the space.

“It was very important to us when we were building this restaurant that it felt like you walked into somebody’s home,” says Iconink’s CEO Hanif Harji. “From the food to the locally handmade plates to the way we train our staff, our core philosophy is we’re in the business of creating emotion. We want you to feel it.”

There’s a lovely symmetry between the warm chaos of an open-air market and the way Shook’s menu is designed, which encourages sharing as the multitude of dips, mains, and perfect red fife pita land on your table. The Shook hummus ($14) is one dish Heaton is particularly keen to have Toronto patrons taste.

“Hummus is one of those dishes that everybody knows,” says Heaton. “It’s like the spaghetti pomodoro of the Italian world, so to me that was the one we really had to nail. We actually ferment our hummus a little bit and use a locally-made tahini from Parallel Brothers. We use sumac onions, Turkish peppers that I import and pickle, and za’atar leaves from the sandy hills of Northern Israel.”

In keeping with the outdoor market vibe, the restaurant also has a small retail component where patrons can buy the same products Heaton’s team jars for the restaurant.

Heaton’s fiery kitchen-scape is flanked by the exposed pantry of pickled everythings which are part of the restaurant’s décor, and the overall design by Model Ctzn is bright, airy, and stylish.

The food is just as eye-catching as the décor, and the Tah Dig ($26)is perhaps the best example of this. The traditional Persian celebratory dish is served as a dome of basmati rice that’s fried in an oil made from turmeric root. Once you crack the dome open, a delicious medley of smoked wild mushrooms and creamed kale spills out, and the entire dish is accented by pickled onions and delicate flower petals.

The labneh ($10) is made from cow’s and sheep’s milk in order to take the dish’s creamy texture to its apex, and it’s topped with honey, sumac, and olive oil.

The olives ($8) are stuffed with feta, za’atar, and preserved lemons. The cauliflower tabbouleh ($14) is beautifully presented with bulgur, tomato, cucumber, walnut, and a preserved lemon dressing.

Once the patio opens in mid-July, patrons will be able to enjoy the bar’s impressive roster of cocktails outdoors. Their cocktail list includes the 100% vegan Tropical Fizz ($15), which includes carrot juice, lime, bourbon, sherry, Jamaican ginger beer, tamarind, and maple syrup. A fast favourite for the summer will surely be the Arak & Roll ($14), an anise-based spirit mixed with aromatized wine, pomegranate molasses, and a strawberry rhubarb syrup that the team makes in-house.

Until then, diners can at least enjoy their interpretation of a bustling marketplace from the 78 indoor seats, including the bar.

“When you’re eating at Shook,” says Harji, “every table is a chef’s table. You’re in [Heaton’s] kitchen.”