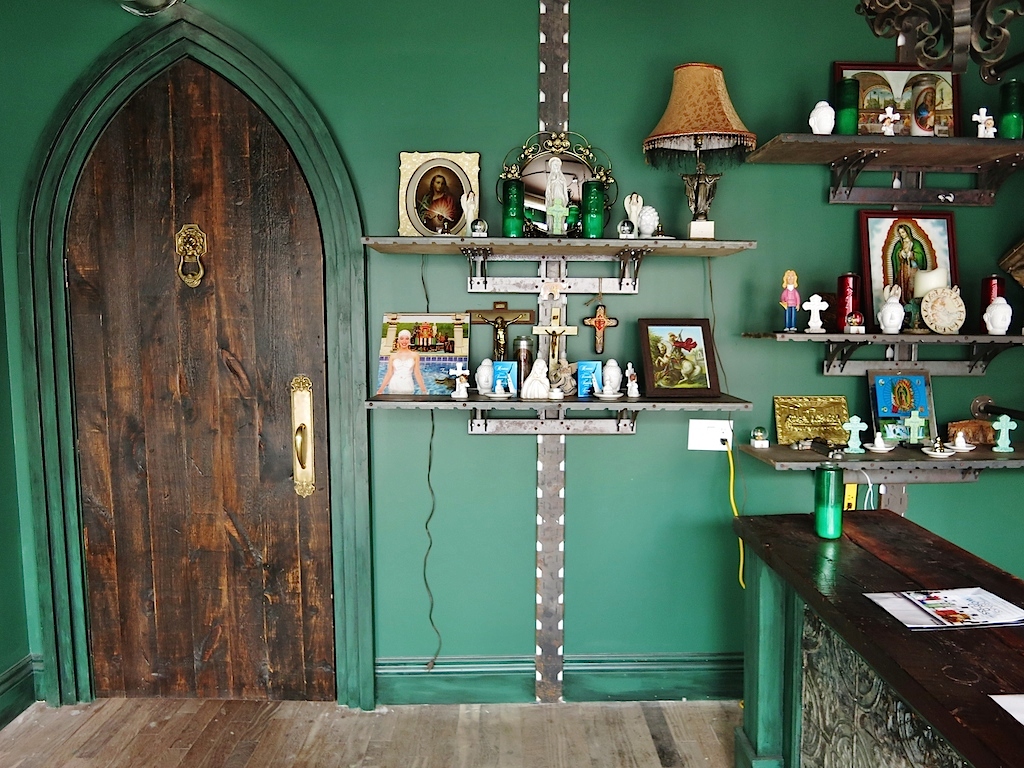 The Vatican Gift Shop is part speakeasy, beer hall and live music venue rolled into one in Toronto. The new space comes from the team behind Leslieville’s beloved Pinkerton’s Snack Bar and Poor Romeo.

As you might've guessed from the name, the bar's owners have adopted all the classic Catholic motifs to create a unique take on a local watering hole.

“The drink, Ride the Cliché, which is also one of our signature cocktails really, encapsulates what Vatican Gift Shop is all about. The façade front, modern beer hall, live music venue, pizza game — these are all kind of trends that are happening in Toronto at the moment," says Marc Baglio, one of the co-owners. "It’s all been done, but never in a collective kind of way. We’re talking all the hits and the trends and doing it our own way.”

Appearances can be deceiving outside the new establishment

When you enter the front, you will see a collection of religious knickknacks as well as branded merchandise hanging along the walls. But step through the custom-made arched door and you’re immediately greeted by a confessional to your right, before the room opens up to the expansive bar that wraps around to the kitchen nook, with the “stage” breaking up the two rooms. Wooden communal tables as well as booth seating pay homage to the Goodfellas, a throwback to Italian mafia and gangster bars.

When designing the space, Baglio asked, “Do we wanna go all out and over the top or pull back?” The answer was clearly to go all out. The design was done in-house and was a joint effort between Baglio and his partners Adam Kelly, Luke McCulloch and executive chef Andy Wilson. Lighting was sourced from Pennsylvania and the antique liquor cabinet from Elbers Antique & Refinishing in Leslieville. There’s even a pew and church façade from the set of the Stephen King movie In the Tall Grass that was gifted by a local producer for throwing a rap party pre-opening at the new space.

If you look up at the bar, you’ll recognize the Creation of Adam fresco by Michelangelo from the Sistine Chapel. This is actually wallpaper that the team sourced from the UK. The tin that makes up the bottom of the wraparound bar is from a 100-year old building in Hamilton. “It’s got this Italian, gaudy vibe but more of an old English or Irish pub feel. The gold trim kind of brings it all together,” says Baglio.

The cocktail menu is short, with only four offerings that will rotate seasonally. In comparison, the extensive beer list is divided into Old World (think Bavarian and European beers) and a heavy selection of East end, local brews. “We want people from the west side to come out and see what the East Side has to offer,” says Baglio and the best way to showcase one of its best exports. Beer, of course.

Here, the list of beers the restaurant has on tap

The opening menu features a selection of pizzas from $14 - $16. Wilson says that in the coming days the menu will expand to offer his riff of Roman street food. “Some of it is pretty decadent, I want to go for more westernized street food, snacky aspects,” he says. Expect to find things like cheese and salumi, polpettes, chopped kale salad and some cicchetti, Italy’s answer to Spanish tapas. “Things on focaccia as well,” says Wilson which is a good repurposing of their sourdough pizza crust recipe, loosely based on the Roman-style pies versus the blistered, thin crust Neopolitan counterpart. “Roman style pizza is thicker and always served in squares,” Wilson adds.

For future live events, expect to grab pizza squares for $5 a slice, a throwback to Wilson’s days playing in a band, where in between sets they’d all, “run across the street, grab a square slice for $0.99, washed back with a forty in the back alleyway.”

In terms of what to expect when it comes to live music, it’s anyone’s guess. “You can walk in one night to a DJ playing a set, a playlist streaming from Spotify and then suddenly a live act comes on,” says Baglio. In keeping with the sort of “secret vibe” of the Vatican G​ift Shop, you can always say a Hail Mary and hope that you’re there on an evening with live music. Though here, a Hail Mary is a shot of Cappo Cappo and Fernet Menta — their house shot. Amen to that.

The Ride the Cliché cocktail