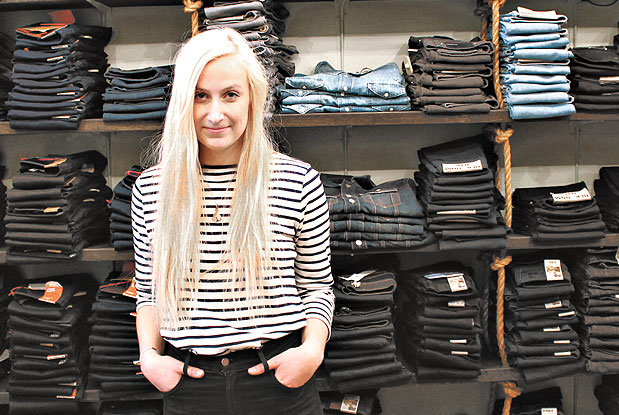 What makes dutil. a force to be reckoned with in the denim arena? Simple: supreme selection. There are 25 different brands of denim available at the company’s Toronto location (the first dutil. shop opened in Vancouver in 2006). Said jeans line the store’s walls and are organized by brand (then by fit within those brands, from super skinny cuts to relaxed ones). If you’re overwhelmed — which, you know, would be totally understandable — just give the staff a hint about what you like. They’re used to it (plus they’ll suggest some great deals).

“We like to be very accessible to everyone out there because denim transcends a lot of socio-economic boundaries,” says Kaitlin Churcher, manager at the shop. “Denim is cool without being pretentious.”

The shop stocks some fantastic brands exclusive to Toronto, like Pure Blue Japan and Momotaro Jeans (both from Japan), as well as Canada’s own Naked & Famous and Sweden’s Acne. You'll also find Imogene + Willie, a Nashville brand featuring attention to detail such as a logo on the rivets and two-toned stitching. Behind the cash register is dutil.'s own brand of jeans called the Quintessential Collection ($238 for men, $228 for women). The wall is really a timeline of how jeans distress. From right to left, the three jeans are shown first unworn and raw, then how they would look after nine months, and finally, after 14 months.

dutil. encourages personal distressing rather than manufactured washes. As Churcher explains, "When you do a natural wear and tear of the jean, it's always personalized to your own movements […] and makes it personal to you."