Revenge of the nerds: four reasons your non-dweeb self wants to be at Fan Expo | TRNTO.com
Skip to content 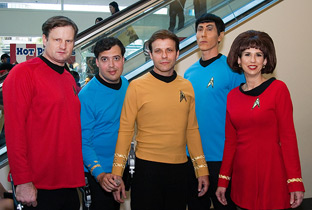 Anthony Daniels, Star Wars’ man-in-the-golden-mask, was kind enough to answer our Fan Expo questions last week. Now, we’d never want to offend the legions of hard-working, hard-gaming trekkies, comic fans and anime aficionados (we’ve got a few D&D manuals in our closet as well), but it goes without saying that conventions are widely regarded as geek-only dungeons into which “normies” shall not pass.

1. William Shatner. Bill Shatner doesn’t need our affirmation. Scientists have proven that, at any given second, Captain Kirk is doing something at least 6.7 per cent cooler than what you’re doing. Remember when Ben Folds produced Shatner’s second spoken-word album, Has Been, and people laughed (recalling, rightfully, his absurd parodic version of “Mr. Tambourine Man”) — but then it turned out to be, like, really kind of good? Or, remember the unmitigated genius in his interpretation of Sarah Palin’s language-mangling during the 2008 elections? Or his slew of post-slump roles that reinvented him as television’s coolest ironic self-aware dad? Never mind meeting him: writing this, we increasingly wish that we were William Shatner.

2. Hayden Panettiere. We say this with the utmost respect for the genuine acting chops demonstrated in Ms. Panettiere’s star-making turn as Claire Bennet on Heroes, but one need not be acquainted with the intricate mythology of the series to appreciate her charms. One does, though, need a pulse, a Y chromosome and functioning optical nerves. Please, feminists and fans, in the name of all that’s good, you’ve got to give us a break for thinking a woman is hot just this once.

3. Gaming galore. In the not-too-distant past, video gaming was second only to elaborate orthodontics as a calling card of the uncool. Nowadays, not being able to handle yourself through an in-depth discourse on Call of Duty tactics is more likely to earn you bewildered looks from your friends. The EB Games Gaming Expo will offer gamers the chance to sample the hottest demos of unreleased PS3 and Wii games. Dedicated fraggers with thumbs capable of bench-pressing, meanwhile, might want to give the LG Electronics Gaming Championship a try. Winners will take home a 55” LG Cinema 3D TV — so you can almost feel the blood splatter and the bullet shells ricochet while in the comfort of your air conditioned home.

4. John Waters. If ever there was a filmmaker who personified the “cult movie,” it’s John Waters. His gory, gender-bending oeuvre might be too weird for you — it certainly is too weird for us (we’re squeamish) — but he’s definitely an interesting and charismatic figure who holds a lot of esteem outside the horror genre. In addition to directing, he’s also an extraordinarily well-read writer and acclaimed performer whose work has garnered interest from artists, literary blogs and (obviously) film buffs. And, just to keep this from getting too highbrow, he’s also made appearances on The Simpsons and creepily introduced “The Creep” on The Lonely Island’s second CD.