Review: The Meme-ing of Life | TRNTO.com
Skip to content 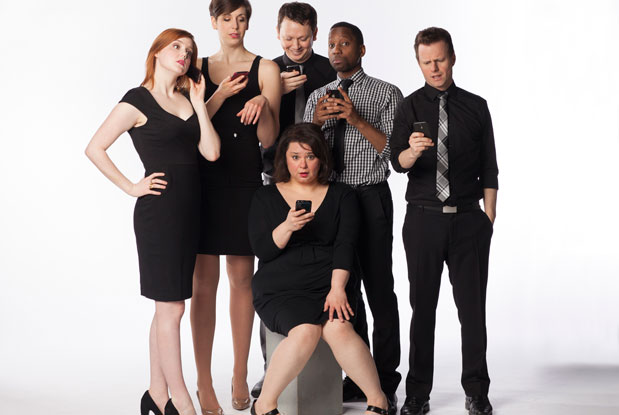 In the ’80s we had the classic musical-sketch comedy film, Monty Python’s The Meaning of Life, to hilariously parody the various stages of life: birth, middle age, death. Flash forward thirty years into the future, and now we have The Second City’s The Meme-ing of Life to mock the various stages of the digital age: YouTube, “legitimate rape” and TTC woes. And just like Meaning, Meme-ing is as edgy as it is funny.

As its blogspeak-of-a-title implies, Meme-ing touches on what many millennial navel-gazers have been pondering since phone calls were replaced with FaceTime and basic human contact was replaced with Facebook: the Internet’s detrimental effect on personal relationships.

The theme is sprinkled throughout the show in funny but touching ways: at the beginning of the show, the six-member cast (which features three newbies, Jan Caruana, Allison Price and Craig Brown, alongside veterans Nigel Downer, Jason DeRosse and Stacey McGunnigle) asks the audience to say “hello” to their neighbours; cast members reveal how they want to make a difference to others (Price, who stands at 6’2”, says she now wears flats to make her shorter male cast members feel like men) and towards the end of the show, audience members are given Starbucks gift cards or money (donated by the audience) for new shoes.

But The Second City hasn’t gotten soft in its old age (this is their 71st production). Under Kerry Griffin’s direction, the show successfully — and smartly — teeters between life’s dark moments (one sketch features teachers armed with guns) and sweeter moments (another sketch is about teenage boy — righteously played by McGunnigle — bonding with his deadbeat stepfather).

My favourite sketches of the night included the most politically-charged one, wherein the three female cast members play cheerleaders with some pretty inappropriate-but-pointed cheers (one of them includes the meme-ful phrase “legitimate rape”) — and the most physical one, with Brown and Price performing a Charlie Chaplin-esque sketch on TTC etiquette.

With a mix of the mellifluous and the macabre, this latest Second City installment is not to be missed — even if most of us still don’t know what exactly a meme is.