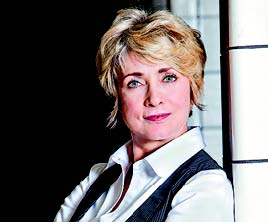 AT 3:30 A.M., Ann Rohmer wakes up. By 5:30 a.m., she’s live to air, as news anchor for CP24 Breakfast, alongside Melissa Grelo and former MuchMusic VJ Matte Babel. Later, Rohmer will anchor CP24 Live at Noon and, depending on the day, any of three other CityPulse shows: Animal House Calls, Hot Property, and On the Quarter.

Rohmer brings 30 years of experience to CP24 Breakfast, including a 12-year stint as the original host of Breakfast Television, which only recently was updated and given its current name.

Before getting her start in the television industry, Rohmer attended Branksome Hall where she learned to love the English language, with the influence of her favourite teacher, Miss Zimmerman.

“She was young, cool and hip, [which was] unusual at a private girls’ school,” says Rohmer. “She really sparked something in me that made me want to embrace the written word.”

In her final year of high school, Rohmer made the switch to coed education, transferring to Northern Secondary School.

“I had very smart and passionate teachers when it came to English, and they perhaps saw in me my love of the English language and of books. They were really helpful and influential, particularly at Northern,” she says.

“All the planets aligned, and I had great teachers who took the extra time to help me, work with me, answer my questions, encourage me, and I learned because they led by example."

In university, Rohmer was in a long-distance relationship and as a means of paying for flights and phone bills, she began acting in television commercials. While she enjoyed being onscreen, she found herself wanting to edit and improve the scripts.

“So I thought: ‘Where could I go with this thirst for knowledge and desire to write, but also to present?’” she says.

In 1979, she landed her first gig as the host of Show Biz. She then went on to work for Global Television before making her way to CBC as the network’s first female sports anchor. In 1989, she started at Breakfast Television where she remained until moving to CP24 in 2001.

“I’m just so lucky to have these opportunities, and CP24 is just phenomenal. We are in everyone’s homes, bedrooms, doctors’ offices, bars, gyms — it’s just amazing.”