Rise in Toronto bike deaths cause for concern | TRNTO.com
Skip to content 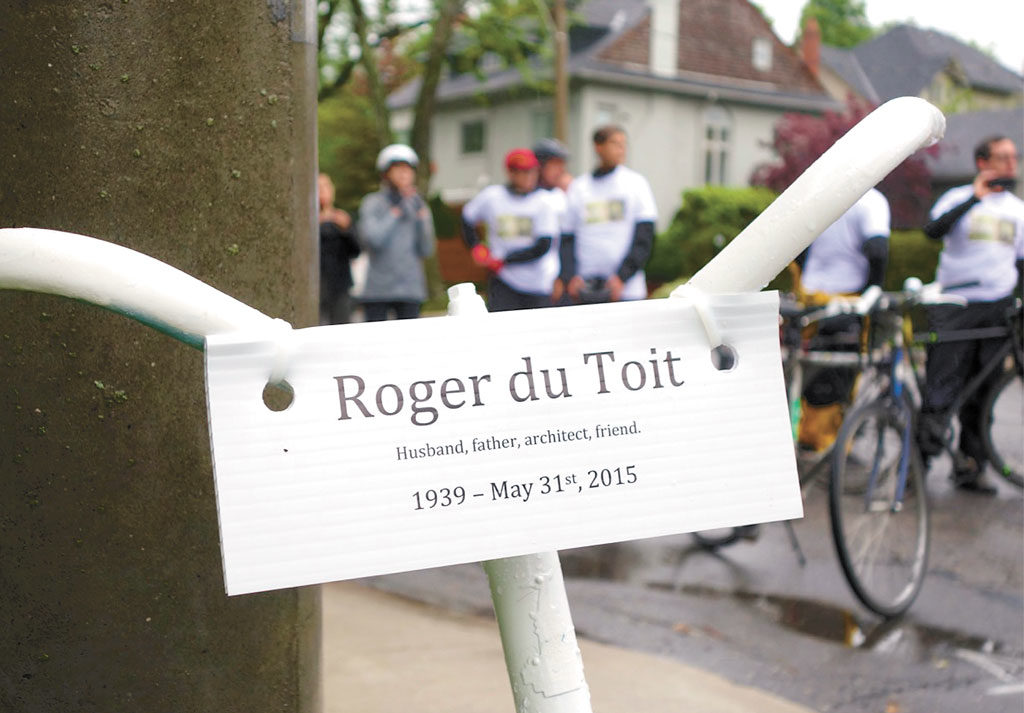 It happened to 26-year-old Adam Excell when he was biking home one Saturday night in Yorkville. It happened again to a 44-year-old resident in North York. And it happened in Rosedale to 75-year-old Roger du Toit, a Toronto-based architect who played a pivotal role in the design of the CN Tower.

Three cycling fatalities in the first six months of this year — the same number of cyclists that died in all of 2014. And while the conditions that cost the lives of each of these men may vary, one thing can’t be denied: these deaths were preventable.

For Megan Torza, one of these fatalities meant losing a personal friend. A partner at the architecture firm DTAH in Toronto, she was a colleague of Roger du Toit, one of the three founding partners of the studio.

She recalled the memorial bike ride she and her colleagues did before visiting the white “ghost bike” installed by Advocacy for Respect for Cyclists at the site of the accident.

“It was a really nice gesture, I think. And I think a number of people who knew him felt that the exercise of participating in the memorial bike ride was a very helpful thing to do with respect to the process of mourning,” said Torza. “He was an avid cyclist.… And certainly as someone who knew him, [I know] he was very full of life.”

Creating a safe system for cyclists is much needed in a city where 54 per cent of residents are choosing to cycle. And the number of cyclists in our city streets is only expected to go up. After all, between 2001 and 2006 alone, the number of people biking to work went up 30 per cent, according to Canada Census data.

“It’s very concerning to us and to everyone that with the increased cyclists on the road we’re seeing these kinds of terrible tragedies,” said Robert Tarantino, chairperson of the board of directors of Cycle Toronto. “For us, it’s just part of a larger concern to do everything we can and ensure that the city and province are doing everything they can to improve safety for cyclists and everyone.”

Although the City of Toronto made a number of changes to improve cycling safety in 2014 — such as adding cycle tracks, bike lanes and sharrows — many of these changes occurred in the downtown core on streets like Adelaide Street, Simcoe Street and Wellesley Street.

With each of the three cycling fatalities occurring outside of Toronto’s core, the question begs to be asked: Is midtown Toronto simply not equipped to handle our city’s cyclists? Or, were these three fatalities just a coincidence?

According to Tarantino, the lack of cyclists in the midtown area could have been a contributing factor to the fatalities. “In terms of increasing safety, more cyclists on the road is a big help,” said Tarantino. “If there are drivers who aren’t downtown a lot, for example … they might be less used to sharing the road with cyclists.”

To help increase this cycling visibility, Cycle Toronto has been campaigning to ensure the Eglinton Crosstown LRT will include separated cycle tracks along Eglinton Avenue.

“I think that [separated cycle lanes] will be the catalyst to bringing riders out in midtown [and] for drivers seeing them,” said Tarantino. “That’s the crucial piece.”

Nonetheless, he acknowledged the lack of cycling infrastructure in the area, a sentiment echoed by Yvonne Bambrick, author of The Urban Cycling Survival Guide and executive director of the Forest Hill Business Improvement Area.

“For years, residents in [Rosedale] had been requesting stop signs and a correction to that intersection because they saw it as hazardous,” said Bambrick, referring to Roxborough Street East and Wrentham Place where one of the life-taking collisions took place.

Although the city had approved additional stop signs and signage changes at the intersection in February, such improvements hadn’t been put in place at the time of the accident, said Bambrick.

“The week we put up a memorial, the city finally got the infrastructure in place. That’s a real problem,” she said. “Anything that’s related to safety I think can’t just sit around in a queue of things that needs to be done.”

And yet, according to Jacquelyn Hayward Gulati, manager of City of Toronto, Cycling Infrastructure and Programs, exclusively blaming these deaths on a lack of infrastructure excludes a big part of the picture: human error.

After all, a 22-year-old now faces a slew of charges after the incident in North York, including impaired driving.

“When we look at cases [with an] impaired driver, that’s an enforcement and a driver behaviour issue. That’s not because of the infrastructure there,” said Gulati. “We find that 80 to 90 per cent of collisions are taking place because of human error.… The driver or the cyclist is making an error in judgment by either not following the rules or speeding or not being aware.”

Statistically speaking, she added, these deaths shouldn’t be a cause for concern. Although there are about 55,000 collisions per year in Toronto, approximately 1,200 of those involved cyclists. In other words, cycling collisions only account for two per cent of all accidents.

The number of cycling fatalities has also remained quite stable given the increase in cyclists. Between 1999 and 2009, North York saw 25 per cent more cyclists on the road, said Gulati.

But for Robert Tarantino, three deaths is still “three too many,” which is precisely why Cycle Toronto held a demonstration at city hall on June 19.

“We were calling for what’s called a Vision Zero Policy,” said Tarantino. “It’s a policy that’s geared toward cities aiming to reduce road fatalities to zero — and that could be cyclists or transit users or pedestrians — and to do everything that needs to be done to get to that goal.”

With a similar target in mind, the City of Toronto is creating a 10-year cycling network plan that will provide a road map of what can be built to improve cycling safety, said Gulati.

“It’s got to be safe for a 10-year-old and a 75-year-old to be able to ride on a street, not just a physically fit 30-year-old who’s used to riding,” said Tarantino. “And as long as we keep those in mind and build infrastructure around that idea, then I think it will work for everyone.”

31
The percentage of residents in the Netherlands who list the bike as their main mode of transportation.

6
The width, in feet, of a new bike lane cutting through the middle of downtown Los Angeles.

600
The number of kilometres of bike lanes in Montreal, compared to around 400 in Toronto.

500,000
​The number of New Yorkers who use a bicycle at least once per month.

122
The percentage increase in the number of Calgary residents commuting to work by bicycle.