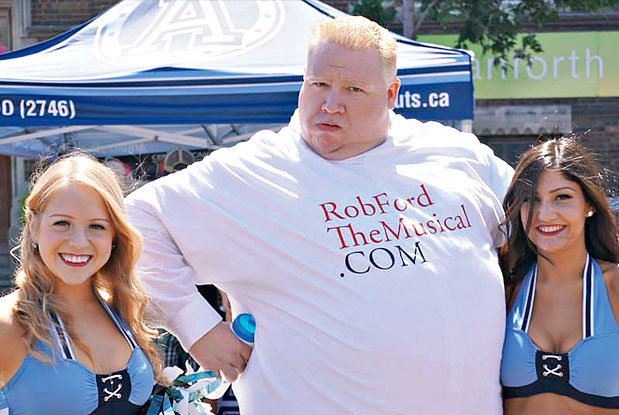 Rarely is the source material for a new musical so completely familiar to every potential ticket buyer. Rob Ford the Musical is a title that says it all.

According to writer Brett McCaig, this “urban satire” isn’t malicious Ford bashing; it is the classic story of a hero who brings about his own undoing (falls from greatness). With 10 songs (music by Anthony Bastian), the 90-minute show pokes fun at everyone involved in the RoFo saga. Along with the laughs, the creators aim to humanize Ford.

The play “has a conscience,” says director Liz Gilroy, and uses humour “to help us make sense out of an insane situation.” Saskatchewan actor and comedian Sheldon Bergstrom was chosen out of nearly 100 actors to play the title role.

Gilroy says, “Bergstrom stood out from the rest due to his extensive repertoire, phenomenal voice and the comedic chops needed to walk the fine line that is the ‘Rob Ford’ character.”

Our notorious mayor has repeatedly opened himself up to ridicule. Although late night comics were grateful for the material, some of them eventually concluded their bits by saying, “This isn’t funny anymore. Rob Ford needs help.” Bergstrom is happy the script gives Ford “a fair shake.”

Although it sounds as if the humour will be no more vicious than This Hour Has 22 Minutes or Stephen Colbert, this is emphatically not a kid-friendly show.

One song is called “Ford Nation F* You.” Other songs (pop, rock and country) will surely feature titles and lyrics lifted from Ford sound bites, like “gravy train,” “drunken stupor,” “all I can do is apologize,” “ask the right questions,” “enough to eat at home” and “business as usual.”

As McCaig says, the comedy wrote itself, they just added music. He adds, they are leaving room in the script for fresh Fordisms. The mayor has also been invited to attend or even participate in the show, but so far, no response.