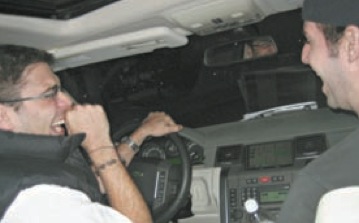 A CHILLING PHOTOGRAPH, taken a mere three minutes before two Rosedale residents were shot and killed one year ago, was released by Toronto Police Services at a news conference on June 10.

Dylan Ellis and Oliver Martin, both 25, were shot and killed just after midnight on June 13, 2008. Det. Sgt. Gary Giroux said he hopes the photograph will convince witnesses to come forward with information about the seemingly random murders.

“[The photo] shows Dylan Ellis and Oliver Martin laughing in the front seat of the SUV, best friends. They’re on top of the world, they have their whole lives ahead of them, and they’re out for an evening with their friends, and they don’t have a care in the world,” Giroux said. “That’s exactly what the photograph depicts to us, and three minutes later, they were deceased.”

The photo was taken by Martin’s girlfriend, who was sitting in the back seat of a Range Rover SUV that was parked on Richmond Street, Giroux said. The group had left their friend’s house after watching a basketball game when their friend called to ask that they return to the home to return a set of keys that had been borrowed earlier. They had circled back and parked the car when an individual approached Ellis.

“[He] looked out the driver’s side window, by turning his head to the left, and acknowledged this person with a greeting that was something consistent with,

Shots were then fired into the SUV, hitting Ellis. Martin then told his girlfriend in the back to get down. The shooter repositioned himself and fired through the front windshield, striking Martin in the chest. Martin’s girlfriend called police immediately, but both men died at St. Michael’s Hospital.

Giroux stressed that no one, except for their friends, would have known the car would be returning to the scene of the shooting.

“It’s the lack of motive that I find challenging in this investigation,” he said. “I have not been able to find another case that is similar to this one in regards to the lack of motive, which I find troubling.”

The Ellis family issued a statement.

“We are doing the best we can and are trying very hard with a lot of love and support to live the way Dylan would want us to,” they wrote. “He lived in a very joyful, loving and sharing way. We think he would be proud of his family and all of his friends for the way we are managing our lives without him.”