Sarah Gadon on her new film American Woman and spending time in T.O.
Skip to content 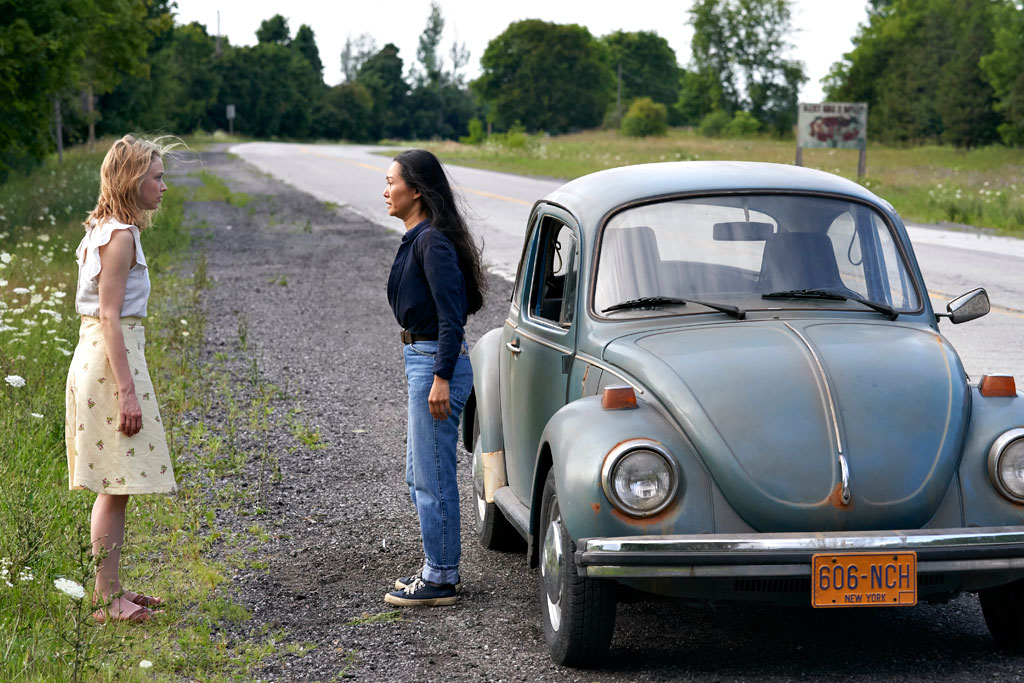 In a world of protests and pandemics, the question of how far people are willing to go in pursuit of the right outcome has never been more relevant. Is an action, no matter how immoral, justified if the desired result is achieved? And what parts of the story are we losing as time marches on? These questions are central to the movie American Woman, starring Toronto actor Sarah Gadon.

The film, which was just released across all digital and on-demand platforms today (June 30), reimagines the story of the headline-dominating kidnapping of heiress Patty Hearst in 1974. It is told from the perspective of a political activist named Jenny, portrayed wonderfully by actor Hong Chau, who is assigned to protect Hearst.

“What I value about the potential of mediums like books and film is that they allow us to look back at the stories that were never told,” Gadon says. “I want the audience to immerse themselves in the dream of what might have happened to these women. I want the audience to think about how misguided and messed up movements can get when people hijack them for their narcissistic pursuits.”

As the world speaks up about the systemic racism in our society, it of course is demonstrated in this film where Jenny is a forgotten character in a story that dominated the news. She’s forgotten because she wasn’t what some thought an American looked like.

“In this famous story at the heart of those sensational events, was the story of another woman, Jenny or in real life, Wendy Yoshimura. Her story was marginalized because she wasn’t the prototypical ‘American woman,’ ” explains Gadon.

It’s the relationship between Jenny and the Patty Hearst–inspired character Pauline, played by Sarah Gadon, that is so central to the film and provides audiences with some very special moments.

“Pauline and Jenny are naturally drawn to each other,” Gadon says. “They are two women who otherwise never would have crossed paths if it weren’t for the radical intervention of the SLA [Symbionese Liberation Army]. Part of the journey of the film is to watch these two women discover one another and get lost in each other along the way.”

The film also stars Ellen Burstyn, David Cubbit and John Gallagher Jr. and is directed by Semi Challas. But Gadon says she had a natural curiosity in Chau from the moment they met.

“She’s a very compelling woman,” Gadon says. “Often when you are acting in a close relationship with an actor, you spend a significant amount of time getting to know them. Since we basically had no prep time together before we started shooting, I brought that curiosity into the process of shooting the film.

Sarah Gadon began acting at a young age in Toronto appearing in TV shows such as CBC’s Being Erica. She made the transition to film thanks to filmmaker David Cronenberg, who cast the young actor in a series of films such as A Dangerous Method and Cosmopolis, which put her on the proverbial map. In 2018, Gadon won a Best Lead Actress Canadian Screen Award for her work in the CBC mini-series Alias Grace. But, it has always been movies that she’s loved. And it’s movies that have given her some solace while quarantining at her Toronto home during the pandemic.

“Since the pandemic started, they seem to be the only real constant in my life,” she says. “I’ve revisited some films like old friends. I’ve spent time watching a lot of films from the ’60s and ’70s, their slow pace grounding me during a time of total uncertainty. Films make me feel like I’ve travelled to distant cities, make me feel like I’ve fallen in love. They challenge me. It makes me happy that I can put something out into the landscape of cinema that is both out of the box and completely relevant to the current movement that we are all witnessing.”

Gadon was at the premiere of American Woman at the Toronto International Film Festival last fall before the pandemic hit.

“I feel lucky to have been able to premiere the film at a festival in my hometown before we all dispersed into our individual bubbles,” Gadon says. “But it’s bittersweet because I also miss making movies. It’s summer, and I’m usually lucky enough to be working, waking with the sun in the early hours of the day, collaborating with a bunch of different people from different walks of life to make something we all collectively believe in. I miss that a lot.”

Currently, Sarah Gadon is doing voice work and working on other projects she has in development but makes time for a weekly movie screening with fellow Toronto film types Jacob Tierney and Matt Hannam.

“We rotate between who chooses the film each week and FaceTime each other before and after the movie with our thoughts and reviews,” she says. “It’s been fun because I’m an actor, Jacob is a writer and director, and Matt’s an editor, so we each approach things from our individual backgrounds.”

As a busy actor, Gadon rarely spends extended periods at home. Her quarantine has been the longest stretch in years, she says. And it does have its silver linings, as many have found.

“At first, it was hard to be home and not see my friends and catch up with loved ones, but I have been spending a lot of time with my parents,” she says. “I’ll go up to their house once a week after I’ve done their grocery shopping and have tea with them in the garden. I love my parents. It has been nice to be a part of their weekly routine and to luxuriate in conversation. In that way, this time is unique and precious.”