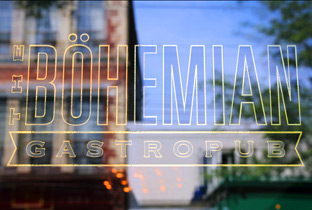 If you've recently wandered by Queen and Portland in search of schnitzel and cheap shots of Jameson, it may have come as a surprise to find papered-up windows and a nameless facade where The Bohemian Gastropub once was. The good news is that the space is being transformed into Lucid Cocktail and Kitchen, fronted by Moses McIntee, one of the city's most lauded artisanal cocktailians.

Having done time behind the stick at some of the city's top restaurants, including Ame, Nota Bene, Spoke Club and TOCA at the Ritz-Carlton, McIntee is foraying into restaurant management at Lucid, which is backed by the same group that's behind Ossington’s Boehmer restaurant and the former Bohemian.

McIntee’s vision for Lucid Cocktail and Kitchen was inspired by a trip to France, where he spent his time eating and imbibing at brasseries where food and cocktails were elevated to the same level of sophistication and served side-by-side late into the night.

“I really wanted to bring that notion back to Toronto, to sell the same artisanal cocktails I've been selling over the years and adding a little molecular flair and table-side service,” McIntee says.

Lucid Cocktail and Kitchen, set to open on Jan. 20, will offer a full Mediterranean-inspired menu from executive chef Robert Richardson, whose culinary alma mater includes Divino, Paese and Queen Street's Peter Pan. Lucid's offerings will focus on wholesome cuisine made with local ingredients, actively veering away from the take-out joints and deep-fried continental cuisine that predominate the neighbourhood.

Brasserie classics like tartare and fresh pasta will complement McIntee's famed cocktails until 2 a.m. The comfortable atmosphere will seek to squash the intimidation factor that mainstream diners and drinkers may feel when confronted with intricate and esoteric quaffs. After working at a fistful of high-end Toronto restaurants over the years, McIntee is no stranger to the importance of customer satisfaction.

“I want to bring people into my world and create a very inclusive experience,” he says.