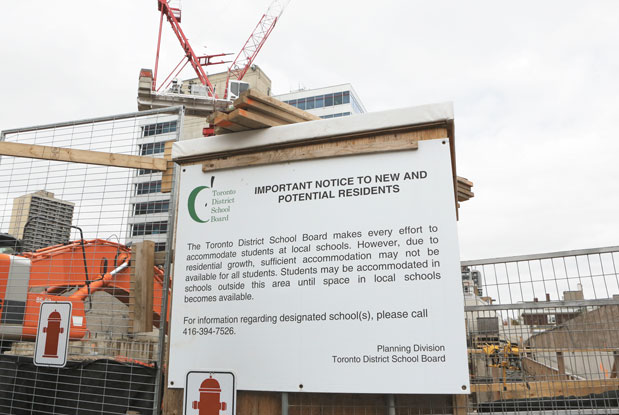 The Toronto District School Board (TDSB) recently posted a notice on the fence surrounding the construction for a new condo development on Roehampton Avenue, just to the north of Eglinton, warning future residents it can’t guarantee space will be immediately available at a school in the neighbourhood. Instead, parents moving into the area might find that their children have to be bussed to less crowded schools elsewhere in the city.

The boom in condo construction around Yonge Street and Eglinton Avenue is transforming a once humdrum midtown intersection into an increasingly energetic neighbourhood. Storefronts that a decade ago were vacated now play host to coffee shops and bars, and rents are going up as ever more young professional types move in.

Rising with the condo towers are concerns in some quarters about the pressure increased density will place on municipal facilities. So far, most of the concern has focused on services such as the already crowded subway and local green spaces, but there is another significant drawback looming into view. If the area’s new residents have kids, there may be nowhere nearby to send them to school.

Josh Matlow, one of the councillors for the Yonge-Eglinton area, said infrastructure is not keeping pace with the rapid development in that part of the city and he puts much of the blame on complicated government structures that aren’t working well together. “You have a school boards and the city which, unlike in many other areas of the world where they are the same level of government, in Ontario they are different levels of government and therefore they are making decisions that sometimes work well together but at many times they conflict or don’t even consider each other’s decisions,” he said.

Matlow is pushing for a working group between the city and school boards to improve lines of communication, but that can’t address interference at the provincial level from bodies such as the Ontario Municipal Board. “We have too many cooks in the kitchen and the stove doesn’t work,” said Matlow. Despite the rapid pace of development in the area, local TDSB trustee Shelley Laskin said the board’s warnings were largely precautionary, and so far, it has not had to bus kids out of the neighbourhood to school.

According to Laskin, the board has been dealing with capacity issues in the area for a number of years by measures such as reclaiming space in schools rented out to child care companies or reconfiguring existing spaces. As condos contain mainly one- and two-bedroom units, they bring in relatively few school-aged children, and Laskin expects that schools in the area will be able to absorb the projected increase for at least five years.

A redevelopment of Davisville Junior Public School is in the cards and should increase capacity there, but with schools such as nearby Oriole Park and Eglinton approaching their limits, the ability of local schools to cope with increases in the population further down the road is in question.

Laskin suggested that the way planning applications are handled at present does not give adequate weight to availability of schools in the area. Although city hall sends the TDSB all development proposals for comment, currently the board can do little more than advise that buyers be warned if places at schools are likely to be in short supply.

“For me, public school should be seen as important in a community as sewers and water and police and fire and libraries,” said Laskin. “But, frankly, city hall can approve all kinds of development and not even consider where the kids would go to school.”

Should the TDSB have to make good on its warning and bus kids to school in areas away from Yonge and Eg, that in itself could be more difficult than it seems. According to Laskin, many of the schools in neighbourhoods adjacent to her ward have capacity concerns of their own. TDSB also lacks land in the area.

Some other parts of Toronto are already coping with the effects of schools that have literally run out of space for kids. In the Yonge Street and Sheppard Avenue neighbourhood, which has seen more than 100 condos built in recent years, the TDSB is already bussing around 900 children to schools in other areas.

Trustee Mari Rutka said a complicated series of measures has been put in place there that sees students who live in adjacent buildings sometimes going to institutions in totally different areas. She said that so many ad hoc arrangements had been made to address overcrowding that the TDSB’s map of the area looks like “a patchwork quilt.” Last year, the TDSB created an uproar among parents when it had to redraw the boundaries of the chronically overcrowded McKee Public School, forcing more than 100 children to change schools. In the case of McKee, the TDSB pointed to the implementation of full-day kindergarten as the catalyst for the switch, but the area’s wider school shortage is largely the result of underenrolment elsewhere in the city. Under provincial funding rules, the TDSB can’t get cash for new schools until it closes down some of its emptier facilities.

“It is not an easy thing to close schools, ever,” said Rutka. The board has been under increasing pressure from Queen’s Park, which last year put a stop to new building projects after cost overruns at the TDSB. It lifted the ban in July, but a report by provincial advisors looking into the TDSB’s affairs sharply criticized its financial management and called for a “cultural shift” at the board. Despite a recent closed-doors decision to sell off some TDSB property, including some shuttered schools and parts of existing school grounds, incoming director Donna Quan still has a big task in sorting out the board’s finances.

When the board finally emerges from its various crises, it might find that Toronto’s rapidly developing neighbourhoods offer opportunities to push the boundaries of what a school should look and feel like.

Mitchell Kosny, associate director of Ryerson University’s School of Urban and Regional Planning, said that the classic image of a school being a building surrounded by playing fields no longer matches modern Toronto. Instead, he suggests that new schools might occupy a much smaller footprint and be located in condos or mixed-use buildings.

A possible template for this type of development is already to hand in the St. Lawrence Market neighbourhood, where  Downtown Alternative School is in a building that also has shops and condo units,

Kosny believes those are exactly the types of communities Yonge and Eglinton needs.

For now, though, it seems doubtful that the City of Toronto and TDSB have either the will or the money to make that happen.