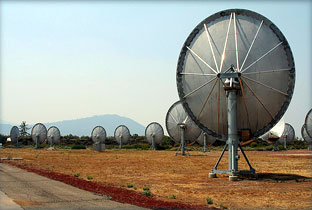 At the Centre for Inquiry’s “The Great Extraterrestrial Debate” at U of T last Friday, Dr. Seth Shostak, senior astronomer at the SETI Institute (Search for Extraterrestrial Intelligence) told us what to expect when we finally encounter E.T., which he wagers a cup of “Tim, what is it, Hortons coffee” will happen in the next few decades.

Given the billions of potentially life-supporting planets in our galaxy alone, Shostak takes it as a given that we’re not alone. But a signal traveling at the speed of light may take thousands of years each way. By the time we get word from another civilization, the senders may have been extinct for millennia.

So when we finally get a signal, what will E.T. be saying?
I think it’ll be like the way Julius Caesar talks to us. It’s one way. It’s interesting to listen to, but it’s one way. So I think they would send you as much stuff as they could, because it’s like filling up a barrel with information and throwing it in the ocean, right? So I suspect it would be very information rich. But beyond that I have no idea.

If we could have direct communication, would we start with “the universal language,” mathematics?
I think mathematics is a very difficult communication medium if what you’re trying to do is to tell them something about how our system of government works or here’s our rock ’n’ roll or whatever, or the kinds of things that would really interest them. They’re not going to be so interested in your astronomy or physics; they’ve got all that. But they might be interested in your pop music, to name something. And I don’ t know how you do that from mathematics. So I’m not that sold on mathematics. I think pictures are better, to get started … and maybe you add words under these and then they can learn your language.

You make that sound so easy, that they’d learn your language. Is that something we could expect them to be capable of?
I don’ t know but you could try. I guess all I’m saying is … that seems like such a limited, parochial way to do it. Whereas if you just send them the Internet, there’s so much stuff there, they’ll figure some of it out.

Why make the search?
…To me it’s a matter of curiosity, really. [Like] all of astronomy. Maybe you’ll learn something profound and incredible. But maybe it just comes down to, “Are we the only kids on the block or not?”

So it’s not a matter of getting information from them?
No. I think that’s an unlikely benefit. It’s a complete guess, but when you talk about signals coming from an intelligence that’s way beyond yours, you know, if you gave TV signals to Neanderthals they’re not going to get much out of it. But at least they’ll know you had TV, or something.