Sexed up Ayn Rand worth ticket | TRNTO.com
Skip to content 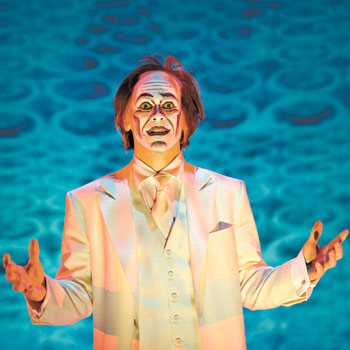 RICK MILLER IS the latest in a long line of talented theatrical performers that elevate to a higher level — think Seanna McKenna at Stratford, Ben Carlson at Shaw and Ronnie Burkett’s puppetry. Handsome, talented and one of our most gifted comic performers in the country, Miller’s one-man shows — co-authored and developed with the talented director Daniel Brooks — have wowed not only Canada but theatre-goers around the world.

His Bigger Than Jesus is a masterpiece — witty, moving, powerful and deeply satisfying on an intellectual level. I went back to see it and experience it several times, gaining with each viewing. Now comes Hardsell in which Miller and Brooks have “taken on” our consumerist society. It is not as satisfying as their inspired Jesus collaboration, but how could it be?

Its co-creators are struggling to come to grips with “the nightmarish world of consumerism” that is so obvious a target one fears being drowned by easy irony and self-reverential condescension. Thank heavens Miller is too good an actor and Brooks is too smart a director to fall into that giant, seemingly inevitable trap. Running only about 80 minutes with no intermission, Hardsell can be gloriously enjoyable, occasionally obscene and obscure but mainly a real pleasure.

One-person shows can occasionally be boring or selfconscious, but that is impossible with Rick Miller, a brilliant performer, master of several languages and countless dialects (including “cartoon” — his MacHomer featured more than 50 Simpsons’ characters in a condensed version of Shakespeare’s Macbeth).

The mainstage at the Berkeley is empty when you walk in, except for a chair on each side and a huge red curtain draped across the back. Otherworldly music is played, the lights slowly come up, and there is Miller as the ultimate sold-his-soul-to-thedevil showman, “Arnie.”

With his face painted garishly, and dressed in a white suit, shirt, tie and shoes (with red socks, natch), clutching a black cane, he regales us almost non-stop for more than an hour.

There are many times when it’s simply too obvious, but when we get bang on impersonations of mythologist Joseph Campbell, James Brown, even a sexually promiscuous if very elderly Ayn Rand, it is non-stop laughs and brain candy for the audience.

When Miller cries out, “Selling crack to kids is good for the economy!” just before the play’s end epiphany that sees his vile character writhing on stage to a Radiohead tune with the lyrics “I don’t care if it hurts, / I want to have control, / I want a perfect body, / I want a perfect soul,” the audience is left wanting more. And what more could one ask for from a night at the theatre? This is well worth seeing, but be warned — it can truly mess up your brain.