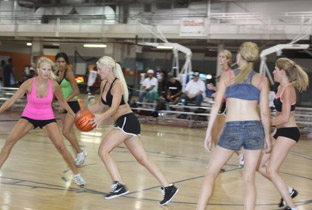 It seems Toronto female athletes are showing more skin than ever these days. First, the Lingerie Football League announced its inaugural Canadian franchise, the Toronto Triumph, earlier this year. Now comes Bikini Basketball Entertainment, set to debut on pay-per-view on August 17. With the Triumph’s first game scheduled for September, Toronto will soon be inundated with ladies in their skivvies playing sports, which has left some with their undies in a bunch.

With barely-there uniforms and overtly sexual catchphrases (the LFL has teams with names like Chicago Bliss and Los Angeles Temptation), it’s no surprise that these latest additions to Toronto’s sports scene are drawing major attention.

Colleen Westendorf of SlutWalk Toronto provides a different perspective on the titillating teams. “We need to question the idea that it’s athleticism or sexualization at opposite ends of a continuum, and why we jump to that conclusion,” she tells us. “We also need to consider the more insidious, commonly-argued perspective that female sexuality on public display is in all cases a bad thing for women everywhere, which seems to be informing this issue to a degree.”

Westendorf does contend, however, that “we also need to think about how [the league] is being packaged, who it’s being marketed to, and what standards and constructs for women regarding beauty, athletics and societal expectations a sport like the LFL and similar leagues may be in danger of perpetuating.”

In this regard, Bikini Basketball Entertainment might be in the clear — if only because it knows what it is: entertainment. “Bikini Basketball is not a league,” BBE’s CEO and founder Glenn Timak tells us. “It’s purely female sports entertainment.” Emphasizing the development of characters and story lines (similar to the WWE), Timak says, “We’re not out there saying the players belong in the WNBA.”

On the other hand, the LFL seems to experiencing a bit of an identity crisis. In an email to us, they declined to comment on this story because “we have no interest in being compared to these fly-by-night leagues that make a mockery of this category of women’s sport.” The league brands itself as “true fantasy football,” blending “action, impact and beauty.”

Miller says he’s hopeful the curiosity of the BBE will fade quickly, but “the LFL worries me more,” he says, “because it is in direct competition with the wonderful IWFL, which has only one franchise in Canada presently — in Montreal.”

At any rate, the success of either these new Toronto teams has yet to be determined. As Westendorf says, “Hopefully, as this league is established in Toronto, we’ll be able to hear from the female athletes themselves what the experience of playing in the LFL has been like for them, and where the lingerie issue fits.”

Even Timak admits “the dust hasn’t settled. It’s still not a for sure thing it will be around in five to ten years. It could be like ’60s frisbee.”