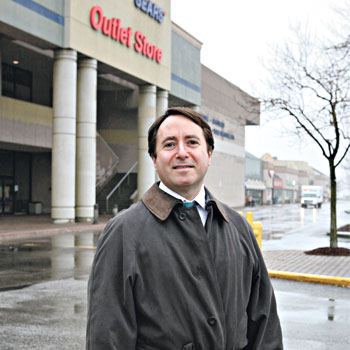 York Region; the Town of Markham; the German Mills Residents’ Association (GMRA); and the developer, Bayview Summit, recently agreed to a settlement on the developer’s controversial Shops on Steeles proposal. The counter-offer, put forward by the local residents’ group, permits 1,235 units. Bayview Summit had previously appealed an application to build 1,787 units across five high-rise towers to the Ontario Municipal Board (OMB). The revised plans would translate into a reduction in the heights of the three tallest towers — from 30, 32 and 28 storeys to 24, 24 and 25 storeys, respectively.

For Alan Diner, president of the GMRA, the decision was not easy. But his group received legal advice that put the odds of a victory at about 30 per cent if it put up a fight. “We knew that there was going to be some development there.… We decided to go with the safer option,” Diner said.

Bob James, a GMRA member who was active on the Shops on Steeles working group, isn’t convinced that this was the best deal his group could have gotten. He would have liked to have consulted independent legal counsel. “I’d been saying for two years that we should be collecting funds to fight this development,” James said.

Coun. Howard Shore acknowledged that the settlement may not be the outcome everyone was looking for, but he pointed out that, at this stage, the matter had to be considered from a legal perspective.

“If you take a look at where this project started three years ago, Bayview Summit was proposing 2,056 units, and through the community involvement over time, they’ve reduced that by over 40 per cent,” he said.

The minutes of settlement are expected to be signed before the OMB hearing, which commences on April 7. But the matter may not be over, as the City of Toronto has yet to withdraw its opposition. James, among other residents, is planning to speak as a participant at the hearing. The traffic impact of the development continues to be a big concern.