Sign of the times: city residents turn to comedy when it comes to public space | TRNTO.com
Skip to content 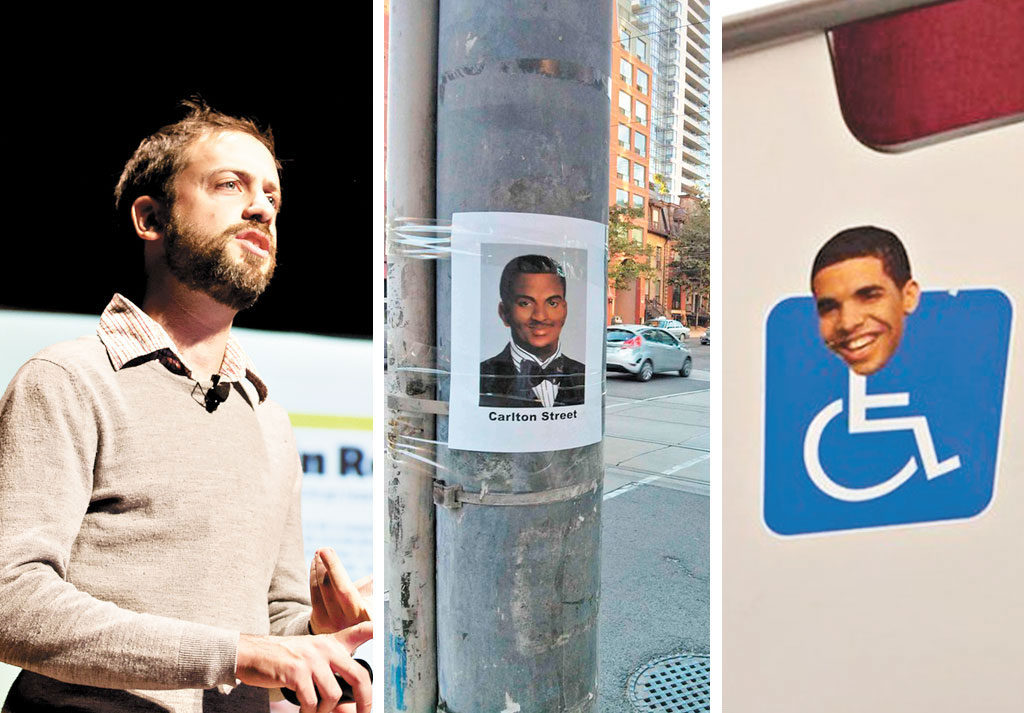 Toronto has been getting tagged all over.

A recent phenomenon has been occurring across the city where people have been decorating various poles, signs and other structures with themed art as a way of taking back the public space.

Torontonians have likely become familiar with seeing stop signs plastered with images such as “Ford” or “Killing Animals.” But lately the art tags have taken a different spin, moving out of the political realm and into the comedic.

In mid-August someone posted images of TV character “Carlton,” the cardigan-wearing uptight brown-noser from the hit show The Fresh Prince of Bel-Air all over Carlton Street near the old Maple Leaf Gardens.

In another scheme, Community Watch signs had been plastered with elaborate stickers of various cartoon heroes such as Batman and Wonder Woman. And in another campaign someone had posted small images of Toronto singer Drake’s face atop various wheelchair signs in the city.

“When people interact with public space in a playful way and use it as an artistic canvas, it adds a layer of humanity and community to our streets,” Dave Meslin, a community choreographer, says. “It transforms a bland landscape into something enjoyable, unique, local and interactive.”

He also said he believes there is a different meaning behind the art and that it is more about people leaving their own mark on public space, which has often been taken over by advertising.

“It’s about taking ownership over our public spaces, leaving a personal mark and sharing something with your neighbours,” he says.

“We’ve littered our public spaces with commercial billboards that all contain a hollow message: buy more stuff. These campaigns aren’t selling anything, and that’s what makes them human and meaningful,” Meslin says.

Meslin also says he’d like to see this trend become more contagious and that Torontonians love this kind of art because it reminds us to be playful and to laugh and takes us out of “banality.”

“It reminds them that the streets are a canvas, and it serves as an invitation to leave their own mark.”