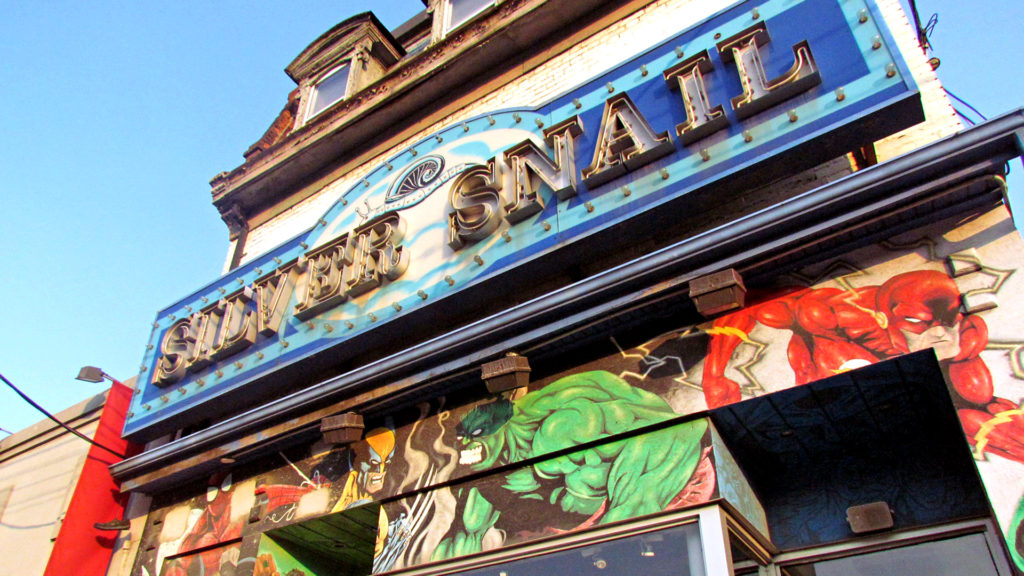 In a return to its ’70s roots, Toronto’s Silver Snail Comics is moving back to Queen West.

The store, which has resided on Yonge Street just north of Dundas Street for the past nine years, was previously located at Peter Street and Queen Street West from 1973 to 2012. Now, owners Brian Hamelin and Mark Gingras are bringing “The Snail” to 809 Queen St. W. near Trinity Bellwoods Park.

“This was a long-term goal to get back to Queen,” Hamelin says. “That’s the home of the Silver Snail to us.”

Hamelin also made the move to improve accessibility. Whereas the old location resided up a flight of stairs on top of venerable burger joint Five Guys, the new location will be on street level and fully accessible by wheelchair.

“Accessibility was a frustration for years with the [old] space,” Hamelin says, “so now that we’re able to reach comic readers who, through our old location, were never able to come [is huge].”

Hamelin says that the move wasn’t solely motivated by a return home. The shift south also represents a change he perceives in Toronto’s retail landscape.

“In terms of the way that the pandemic has reshaped the city, Yonge and Dundas isn’t the shopping mecca it once was,” Hamelin says. “There was Hairy Tarantula, there was 401 Games up the street, there was the HMV there. Businesses have just been closing. People aren’t going out and being like ‘Oh I’m just going to go and walk up Yonge Street and check out the stores.’ It didn’t really feel like the place for us anymore.”

Now surrounded by like-minded businesses, Hamelin and Gingras are excited for the future.

“It feels much more like a community, and there’s foot traffic,” Hamelin says. “It’s going to have a much more similar feel to what the old store was.”

In keeping with the communal theme, Hamelin and Gingras have commissioned local artist Yannie Lo to paint a mural that will encompass the entire front of the building.

Hamelin says that feedback from customers about the move has been overwhelmingly positive, mixed in with some visceral relief that the store won’t be another victim of the pandemic.

“When we had our ‘Last Days of Yonge Street Sale,’ a lot of people thought we were closing,” Hamelin says, “[so] there was definitely a lot of relief. We have incredibly loyal customers.”

Those loyal customers have seen the Silver Snail through the toughest of the COVID restrictions.

“We’re a fully independent business,” Hamelin says, “so it’s just us. It’s obviously been a pretty hard time to continue, so a lot of people I think are just happy that we’re not leaving.”

With the move back to Queen West, Hamelin and Gingras are ready to welcome a whole new set of customers to the store.

“Every day that I worked at Yonge Street, someone would come in and say ‘oh wow, you guys are here. I used to shop on Queen, and I didn’t know you guys still existed.’ I’ve been hearing that for years and years. We’re hoping to bring back our old customers, and a whole new generation of readers as well.”