Six ways to get aquainted with Marshall McLuhan’s legacy | TRNTO.com
Skip to content 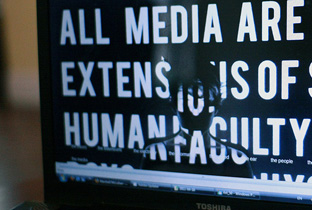 A hundred years after the birth of Marshall McLuhan, “prophet of the Information Age” and Canada’s most baffling icon, his legacy is being celebrated this year around the world with McLuhan 100, especially in Toronto, where he made his home and his mark on the world. In preparation for Monday's event at the Toronto Reference Library, McLuhan 100: Toronto's Future in McLuhan's Global Village, here are six ways to get a better understanding of McLuhan.

1. Only got a minute? Review that history minute you must have seen on TV a while back.

2. Got three minutes (or 93)? Famous for being as quotable as he was misunderstood, McLuhan did a cameo in Woody Allen’s Annie Hall, which might make you laugh as well as think. Allen attended one of McLuhan’s Monday Night Seminars at University of Toronto (as did Pierre Trudeau, John Lennon and Yoko Ono).

3. If you have a bunch of minutes, have a look at the CBC archives, which have several TV and radio clips of McLuhan.

4. If the weather is right, you could do the McLuhan Walking Tour after downloading the audio tracks to your cell phone or MP3 player.

5. Or, if you’re still stuck in the Print Age, you can read about McLuhan in the summer issue of The Walrus and the autumn issue of U of T Magazine.

6. If you have lots of time, you can have a go at some of McLuhan’s books (for a guy who declared that “the age of writing has passed,” he sure wrote enough of them). The good thing is that if McLuhan is to be believed, you’ll only have to read the right hand pages.