Sky’s the limit for legendary rocker’s Best Of album - TRNTO.com
Skip to content 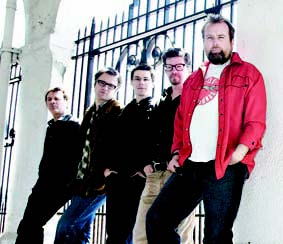 COMMEMORATING THEIR 20TH anniversary as a band ranked highest among reasons why Josh Finlayson and his Juno-winning folk rock band the Skydiggers decided to make a compilation record, The Truth About Us — A 20 Year Retrospective.

To celebrate the release, the group kicked off a string of shows at the end of May at Toronto’s Dakota Tavern. “The songs represent every era of the band,” says guitarist and North Toronto Collegiate graduate Finlayson.

“We wanted to choose material that we felt really represented us from a writing point of view and what we felt we wanted to represent to the people as a retrospective. It involved a lot more work than we thought.”

The Truth About Us comes with a booklet of memories, essays and tributes by renowned Canadian musicians such as Gord Downie of the Tragically Hip, Sarah Harmer and Jim Cuddy of Blue Rodeo.

The 22 remastered songs were chosen by the band as the best songs of their 10 albums. “The ability to make records and perform and to do something you love and to build something from the foundation from your imagination and have people connect to it is the best thing that I could hope for,” says Finlayson.

It was at North Toronto Collegiate that Finlayson got his musical start.

“By no means was I a great student or academic, but I truly enjoyed my time at high school. It’s without question a place that really greeted and encouraged my interest in music,” he says. His favourite teacher was Desmond Nottley, who, despite being strict, offered great advice.

“One of the first times I performed was in the cafeteria at North Toronto. [He said] I seemed very dedicated to what I was doing. It was an acknowledgement that resonated with me,” says Finlayson.

After graduation, he and his high school bandmates headed to England where Finlayson honed his music skills. He returned to Canada after two years and began collaborating with Andy Maize, whom he also met in high school, forming Skydiggers in 1989. Today, 20 years later, the band still strives to make music that endures.

“If we’ve ever had an agenda from the beginning as a band about making records, it was that we really wanted to make music and songs that were as timeless as possible,” he says.